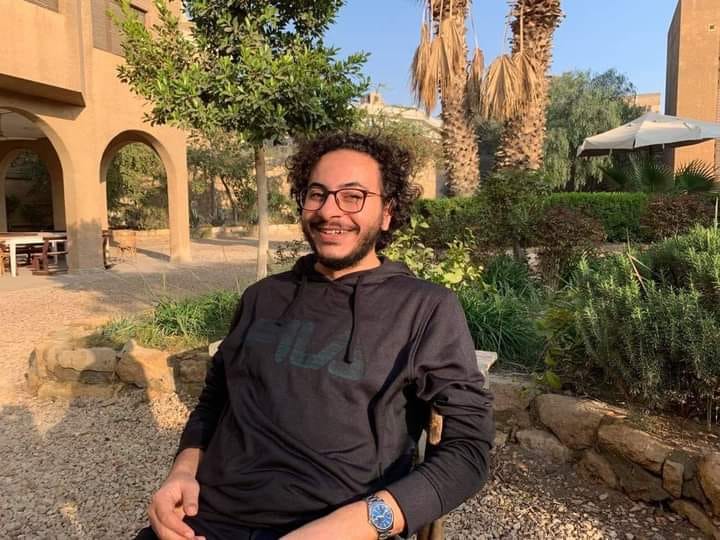 Graduate student Ahmed Samir Santawy, who had been held incommunicado since February 1, has been ordered held in remand for 15 days by the State Security Prosecution, according to his lawyers.

While the State Security Prosecution has charged Santawy with joining a terrorist group, publishing false news, and using a web account to publish false news, his brother told Mada Masr that security forces questioned Santawy about his research on December 23 upon his arrival to Sharm el-Sheikh from Vienna.

According to his lawyer Nabih al-Genady, Senawy told the prosecution on Thursday that he was hit in the face repeatedly during a period of detention in Cairo’s First Settlement, and that the security officers who were interrogating him asked him about his relationship with Ultras al-Ahlawy and the Muslim Brotherhood, although Samir confirmed that he did not belong to either of the groups.

Before appearing before the prosecution on Saturday, Santawy had been forcibly disappeared since February 1, when he presented himself at a National Security Agency office in Cairo’s First Settlement in response to a summons from a security agency that had raided the family home on January 23.

His lawyer was not allowed to attend the February 1 interrogation, and officials did not reveal Santawy’s whereabouts to his family.

Santawy then spent the next two days at the NSA office before being transferred to a Fifth Settlement police station, a source at the police station told Abdel Rahman Samir, the graduate student’s brother.

According to the source, Santawy was then held at the police station until Thursday night, when he was transferred to an undisclosed security holding facility.

Santawy, who was researching issues related to women’s rights in Egypt for his graduate course in sociology, has been questioned repeatedly by the National Security Agency at the airport on his way in and out of Egypt, according to his brother.

“The NSA would ask him about his reason for traveling and his topic of study. Each time, they would ask him a couple of questions and then let him go,” his brother stated. After arriving to Sharm el-Sheikh International Airport during vacation from the Central European University, Santawy was again stopped at the airport before being let go.

While Santawy was in Dahab, South Sinai, security forces raided his family home in the Fifth Settlement on January 23. “We were startled,” said Abdel Rahman Samir, adding that they looked through the family’s phones, asked to see the rental contract and searched a storage room inside the building. “Before they left, they asked us about Ahmed and told us to tell him to go to the NSA office in the Fifth Settlement police station as soon as he’s back,” his brother said.

Santawy hoped that the interrogation would be short, and that he would not face any trouble traveling back to Vienna to resume his studies, Abdel Rahman told Mada Masr, adding that his brother had not been involved in political activity for many years.

Samir went to the Fifth Settlement police station on January 30, only to be told that he must return on Monday, February 1.

After news of Santawy’s disappearance broke on Thursday, CEU President Michael Ignatieff issued a call for his release and return to his family and studies.

In a call for the Interior Ministry to release Santawy on Thursday, the Arab Network for Freedom of Thought and Expression described his detention as symptomatic of a systematic pattern of intimidation and harassment of researchers by the Egyptian authorities, pointing to the detention of University of Bologna Egyptian graduate student Patrick George Zaki last year.

Zaki was detained at Cairo International Airport in February 2020 while visiting Egypt. After his arrest, Zaki, a former Egyptian Initiative for Personal Rights researcher, was held incommunicado for 24 hours, during which time he was beaten and electrocuted, before appearing at the public prosecutor’s office in his hometown of Mansoura. He remains in police custody on remand detention, pending investigation into charges of spreading false news and calling for unauthorized protests.

The statement also mentioned Walid al-Shobaky, an Egyptian doctoral student at the University of Washington, was ordered held in remand detention after being disappeared for four days in May 2018, following a meeting with a University of Zagazig law professor, Mohamed Nour Farahat, for research purposes.

He was later charged with spreading false news and joining a terror organization and added to Case 441/2018, under which a number of prominent lawyers, bloggers and journalists have been detained. After spending six months in prison, Shobaky was released in December 2018 on probation, the terms of which included that he was banned from traveling and that he must be present at a police station for four hours twice per week.

Giulio Regeni, an Italian PhD candidate at University of Cambridge who was researching independent trade unions in Egypt, disappeared from a metro station on January 25, 2016 — the fifth anniversary of the 2011 revolution — while on his way to meet a friend in downtown Cairo. His body was found several days later, on February 3, on the side of a highway on the outskirts of the city bearing marks of severe torture. In December, the contentious, nearly five-year joint investigation into his murder that has seen Italian prosecutors repeatedly accuse Egyptian officials of deliberately trying to mislead came to an end with a mutual parting of ways, with Cairo asserting that the suspects remain at large and Italian prosecution intending to conclude its own investigation into the murder with five suspects, all of whom belong to the Egyptian security apparatus.

The Italian prosecution formally requested a trial for four Egyptian security officers at the close of January 2021. The four security officers are accused of kidnapping, conspiracy to murder and grievous bodily harm, Italian news agencies reported, citing a statement from the prosecutor’s office.

Topics
Related
blogger detentions
Abdel Rahman ‘Mocha’ Tarek ends hunger strike in protest of detention due to health issues, pressure from prison
Blogger Abdel Rahman Tarek ended on Wednesday a 53-day hunger strike in protest of his detention
student arrests
Egyptian graduate student home for holiday forcibly disappeared after police interrogation on Monday
No one has been able to reach student Ahmed Santawy since Monday, when he was in police custody
remand detention
Imprisoned translator Kholoud Said faces charges in new case after weeks-long disappearance from police station
A December order for the translator’s release after 6 months remand detention was never carried out
detainee and prisoner health
Our bodies and enmity: A personal introduction
Alaa Abd El Fattah | The story is not about prisoners’ health, but the health of the nation.