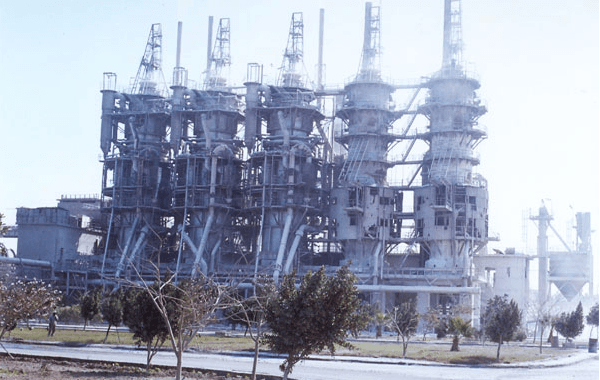 Despite a series of worker-led proposals to revive profit-making, a decision to liquidate the Egyptian Iron and Steel Company was made final in a hasty announcement on Monday at an extraordinary general assembly meeting, an attendee told Mada Masr.

The coup de grâce to the company — once a driver for Egypt’s post-independence state industrial sector and the site of a 1989 sit-in that won unprecedented gains for Egypt’s labor movement — was delivered in a speech read out by Chair of the Metallurgical Industries Holding Company Mohamed al-Saadawy, without the floor being opened to attendees who included the three workers’ representatives in the assembly, said the source.

Since Monday, the decision to liquidate Egyptian Iron and Steel has already been met with substantial public pushback.

Speaking to Mada Masr on condition of anonymity, the attendee said that worker representatives tried to protest the decision during the meeting and that workers had put forward a proposal to improve the company’s financial situation. Trading on Egyptian Iron and Steel Company shares was stopped temporarily on the Egyptian Exchange on Tuesday as a preface to the procedures for its liquidation.

Describing Monday’s extraordinary general assembly to Mada Masr, the attendee said that it did not last longer than 15 minutes and that the holding company chair left quickly after reading a prepared statement and without discussing a memorandum prepared by the company’s trade union committee despite its being on the meeting’s agenda.

The Metallurgical Industries Holding Company, which belongs to the Public Enterprise Ministry, owns more than 83 percent of the Egyptian Iron and Steel’s shares, while the rest are divided among a number of investors, associations, banks and individuals.

While the decision of the general assembly attributed the company’s liquidation to huge losses and infeasibility of resuming production, a trade union committee member told Mada Masr that the disregarded memo had included a proposal to halt losses while paying off over a period of two years the debt the company has accumulated.

The company registered losses of LE982.83 million in 2020. Yet, the sum represented a 35 percent reduction in losses year-on-year, while a large portion of its standing debts has been cleared by selling off unused plots of land.

The decision to liquidate the company’s factory operations in Helwan follows a back-and-forth between worker representatives and shareholders that has made its way through the courts.

The Egyptian Iron and Steel Company’s board of directors had worked over recent years on a development plan to increase the concentration of iron ore that is extracted from the company’s quarries and mines in cooperation with a Ukrainian company with the hopes of improving overall productivity. Initial talks in 2018 included the former head of the holding company and Public Enterprise Minister Hisham Tawfiq.

In a move that was framed at the time as a potential saving grace for the company, the Egyptian Iron and Steel Company transferred LE750 million in land assets and company shares to Banque Misr in June 2020 to settle US$59.6 million in outstanding debts owed to the bank over judicial disputes. Around $12 billion worth of the debt was waived entirely.

However, a member of the General Union of Engineering, Metal and Electrical Workers told Mada Masr in September that the Metallurgical Industries Holding Company had chosen instead to go ahead with plans to break up Egyptian Iron and Steel, looking to close its main factory operations in Helwan and transfer its quarrying and mining activity to a new corporate entity. A general assembly was convened in November to set the decision in motion despite legal contestation from the firm’s trade union committee and other worker representatives.

A member of the company’s trade union committee told Mada Masr this week that work is ongoing to establish the new company that will take over Egyptian Iron and Steel’s mining and quarrying, after which steps will be taken to liquidate the remainder of the company. According to coverage from news outlet Masrawy, the new mining and quarrying company will employ just 400 workers, while Egyptian Iron and Steel currently employs over 7,500 people.

On Wednesday, minutes on the general assembly that were handed to the Egyptian Exchange were reported to lay out a provisional timeline for the division and registration of the new quarrying and mining company, which it said would be registered with the EGX within two months of the decision. According to the timeline laid out in the minutes, two weeks after the new company’s shares begin trading on the EGX, a party will be designated to handle the liquidation and the liquidation will be registered with the commercial registry, with the liquidation process to be completed within a year and a half to two years.

Once the liquidation is underway, the company’s trade union committee intends to negotiate compensation payments for over 7,500 workers that would come in at least LE14,000 for each year of service for each worker, according to a second committee member who spoke to Mada Masr on condition of anonymity. The committee member stated that the rate is based on what workers obtained when the National Cement Company was liquidated in 2018, given that Egyptian Iron and Steel’s regulations do not stipulate how workers should be compensated in the event of closure. However, the member added that the committee will not begin negotiations on worker compensation, since “the committee can’t appear to be calling for workers to be laid off, as it is better for workers to benefit from their wages while the company is still working.”

Amid an outpouring of opposition to the decision, the Egyptian Trade Union Federation has announced its rejection of the decision to liquidate the company, and its sorrow for the “displacement of its 7,500 workers, and the elimination of a giant national company with a national history.” Vice President of the Egyptian Trade Union Federation Khaled al-Fiqy noted that the closure is just the latest blow to the public industrial sector, blaming losses in the sector on “mismanagement and the government’s inability to develop the exploitation of resources and ingredients, and the promotion of national industry.”

In other expressions of anger at the liquidation decision, a legal case was filed by the prolific litigator Samir Sabry at the State Council to prevent its implementation and steps taken by writer and journalist Ahmed al-Khamisy to explore a public buyback of the company’s shares. In a statement on Tuesday, Fiqy said that the decision comes amid a general sense that the current government is seeking to liquidate the public sector, which he called “a shield and sword” for Egypt’s production.

Pushing forward with a long-stalled program of public stake offerings in state-owned companies that was originally launched in 2018, Public Enterprise Minister Hisham Tawfiq revealed on Sunday that four public business sector companies have been nominated for public listing. El Nasr Mining Company was the only one mentioned by name.

During his term in office, Tawfiq has revived the Mubarak-era privatization and overhaul of the public sector, having presided over the liquidation of the National Cement Company and the Egyptian Navigation Company amid a major overhaul of a sector that was reported to be burdened with LE40 billion in debt.

Amendments to the public sector law ratified in September 2020 alter bonus schemes to tie workers’ payments more closely to company profits, bring management structures closer in line with the private sector, allow for company management to be contracted out to private sector consultants, and reduce worker representation on company boards.

Other amendments allow for the liquidation of companies where debts exceed half of the company’s capital, which has led to an outcry from the Egyptian Federation of Trade Unions, which said that this would render around 50 state-owned companies viable for liquidation.

The new amendments to the public business sector law are consistent with the requirements of the most recent loan agreement with the International Monetary Fund, which Egypt obtained through the credit preparedness program months ago as the global economy suffered a steep downturn due to the effects of COVID-19. The IMF agreement calls for more transparency in state-owned companies by updating the published financial reports of those companies by September.

The previous IMF agreement that Egypt had signed under the Extended Fund Facility program in 2016 had stipulated that the government needed to take several steps toward disclosure and transparency in state-owned companies, and it included a wide list of companies beyond just those affiliated with the Public Enterprise Ministry.

In December 2018, the government published a comprehensive report about the financial performance of state-owned companies for the first time, which was supposed to come out in June 2018. In July 2019, the IMF issued a statement commending Egypt’s efforts in increasing the transparency of state-owned enterprises.

However, the state has faced pushback from workers, who have launched labor action after news emerged that the state was pursuing the closure of a Kafr al-Dawwar Textile Company factory and a Talkha branch of Delta Fertilizers. Meanwhile, a sit-in at a Nag Hammadi factory belonging to Egyptalum has escalated into a strike, after the public enterprise minister refused to approve the disbursement of profit-sharing bonuses at a November general assembly to review the 2019/2020 budget. Egyptalum workers also objected to not receiving bonuses normally paid on the basis of performance. The strike was called off on Wednesday following negotiations with the company’s management, according to a participant in the strike who spoke to Mada Masr on condition of anonymity.

Founded in 1958, Egyptian Iron and Steel was once a driver for post-independence dreams of a robust industrial sector. It was also the site of a major sit-in in 1989 that was held in response to the firing of two workers who had pushed for the union’s independence from management. The sit-in gained such traction that security forces broke into the company to disperse workers by firing live ammunition, killing a worker named Abdel Hay Suleiman in the process. It formed a benchmark in the history of Egyptian labor action.

Topics
Related
public sector
State cracks down on Delta Fertilizers sit-in, rejects worker demands, holds 8 in remand detention
Eight workers, six of them trade unionists, are in detention facilities, as a sit-in continues.
steel
Egyptian Iron and Steel Company mines to be spun off despite worker objections
Egyptian Iron and Steel is the only Egyptian company that uses iron ore found in Egypt’s mines.
IMF loan
Farewell to worker participation in the management of the public business sector
Beesan Kassab | The government is taking up the task of “redefining" the role of state-owned companies in Egypt
labor unions
The Egyptian Iron and Steel Company: A symbol of optimism grows old
Beesan Kassab | Many employees believe that the company will be liquidated in as soon as two months.