In a continuing sign of the unrest plaguing Bir al-Abd, a Coptic man was kidnapped by armed militants last week from outside his home in the North Sinai city.

Three armed militants seized Nabil Habashy Salama on the evening of November 7 in the Ghezlan neighborhood of Bir al-Abd, local sources tell Mada Masr. As they were escaping, the militants stole a pickup truck from the vicinity of Salama’s house.

The local sources tell Mada Masr that while Salama is originally from Sharqiyah, he built the only church in Bir al-Abd, where he now lives. He is also the proprietor of several jewelry stores in the city.

Salama’s whereabouts remain unknown. His son has stated that he filed a police report an hour after the incident and that he does not know the identity of his father’s kidnappers.

While Salama is the first Copt to be kidnapped from Bir al-Abd, the Islamic State-affiliated Province of Sinai has frequently targeted Copts in other areas of North Sinai in recent years.

The last incident in which a Copt was kidnapped in North Sinai was in January 2019, when a man was ambushed by the Province of Sinai on the international road west of Arish. The militant group later claimed responsibility for kidnapping and killing the Coptic citizen.

The Province of Sinai repeatedly targeted Copts in Arish, leading to the displacement of scores of Coptic families in early 2017. Families began to return in mid 2019 after Operation Sinai 2018 succeeded in solidifying Armed Forces control of Arish and limiting the movement of the Province of Sinai within the city.

However, the Province of Sinai has not claimed responsibility for the kidnapping of Salama.

The Province of Sinai has concentrated its activities in Bir al-Abd in recent months. After carrying out a fierce attack on an Egyptian military camp in the village of Rabea in North Sinai at the end of July, the Province of Sinai occupied the villages of Qatiya, Iqtiya, Ganayen and Merih, forcing many residents to flee their homes due to the rapidly deteriorating security situation.

Almost 70 days after being displaced, the residents made their way back, only to find that the Province of Sinai left behind scores of rigged explosive devices and continued to lurk on the outskirts of their villages.

The booby traps that the militant organization installed along the roads and inside houses continues to pose the biggest threat to residents. In the past two weeks, six people have been killed in blasts from triggered explosive devices, bringing the total number of civilian deaths in IED blasts since their return to 15, most of whom are women and children. Twelve people have also been injured in the explosions.

On October 21, a booby trap in Qatiya killed a child. On October 24, another incident killed five women from the same family. An explosive device went off inside the house, killing two women. When their relatives ran into the house to save them, more explosive devices went off, killing three more women and injuring four people, according to local sources who spoke to Mada Masr.

The rise in civilian casualties has prompted residents to coordinate with the health directorate in Bir al-Abd to launch a blood donation campaign to ensure immediate treatment for those who are injured.

The ever-present danger of explosive devices going off has also caused a delay in the start of the academic year for 17 schools in the areas surrounding the four villages. North Sinai Governor Mohamed Abdelfadeel Shousha announced in mid October that schools will be delayed by 14 days until all schools are cleared of explosive devices. But even though the specified period has passed, schools have remained closed, and there are no official statements about the fate of the current academic year.

A local source in Iqitya told Mada Masr that booby traps were discovered in the village’s preparatory school last week. According to the source, the security situation has primarily affected elementary school students, as secondary school students are mostly enrolled in the Rabea Secondary School outside the villages.

The residents of Bir al-Abd have called on President Abdel Fattah al-Sisi to deploy the Armed Forces to inspect people’s homes, find the explosive devices planted throughout the villages, and cordon off the villages from the direction of the Salam Canal in order to prevent militants from planting more explosives during the night. 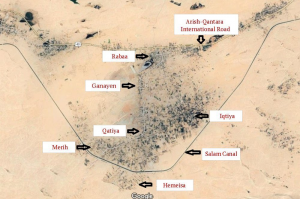 According to local sources, the Armed Forces prepared for residents’ return by setting up two military checkpoints on two of the Salam Canal’s bridges, which connect the villages to the southern desert front where the Province of Sinai is stationed. However, militants continued to appear at the outskirts of the villages during the first days of the residents’ return on October 10 before disappearing again.

Following this, the Armed Forces took two new measures, one of which the residents saw as a “double-edged sword.” A few days after residents returned to the four villages, tribal elders petitioned the Armed Forces to arm a group of young residents from the Bayadiya and Samaana tribes. The residents to be armed were carefully chosen by tribal leaders and the Armed Forces, according to local sources. According to the local sources, armed civilians’ main role is to protect the outskirts of the villages, not so much its center. Their task begins at dusk, and they take shifts on night patrols until dawn. In the morning, the young men return to their usual work in the villages unarmed. At night, the young men ask residents to stay at home, while the Armed Forces carry out a screening patrol inside the villages from time to time, without setting up checkpoints.

Even though residents are convinced that this new approach of arming civilians to protect their homes is necessary, they are aware of the precedent of the Province of Sinai attacking villages whose residents cooperate with the Armed Forces, especially in Sheikh Zuwayed.

The second measure the Armed Forces took in cooperation with residents was to prevent anyone other than those originally from the village from living there. This decision effectively prevents anyone displaced from Rafah or Sheikh Zuwayed from entering the four villages.

According to local sources, the Armed Forces implemented this policy after it was confirmed that some civilians who had been displaced and moved to the four villages had been cooperating with the Province of Sinai.

Parallel to the Armed Forces’s decisions, executive authorities in the governorate reopened the health units of Ganayen and Rabea and provided them with medical teams. Technical workers have also succeeded in reconnecting the electrical grid and repairing the telecom operator in Qatiya village. Transportation to and from the villages was also restored.

Security forces promised shop owners on the commercial street of Rabea that they would return to work soon, after they were allowed to clean the street and the shops. The commercial area is adjacent to Rabea military camp that was attacked by Province of Sinai in July.

However, families whose houses were partially or completely destroyed as a result of the clashes that happened in the villages continue to wait for financial compensation from the governorate, as nothing has been disbursed. Residents have not received information about the value of compensation or when they will be paid.