اقرأها بالعربية
Detox | An adventure in your living room

As we continue to try and find creative ways for you to spend your weekend, dear reader, we hope this issue encourages you to pay a visit to the Saqqara complex, a UNESCO World Heritage site since 1979, on your next day off. There you can visit several pyramids, tombs and temples dating from the First Dynasty and the Old Kingdom all the way to the Greek and Roman periods. If you’re up for the adventure, the Saqqara complex is open every day from 8 am to 5 pm, with tickets costing LE20 for Egyptians and LE180 for foreigners. 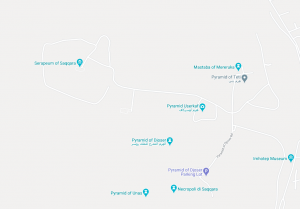 To the present day, artifacts continue to be found in the Saqqara area. Recently, a new tomb was discovered, bringing former Antiquities Minister Zahi Hawwas back into action.

While the recently discovered tomb is not yet open for visitors (and we don’t know when it will be), fear not, for you can still take part in the thrill of the discovery without leaving your home by watching the Netflix documentary Secrets of the Saqqara Tomb, which documents the journey of the excavation by a group of Egyptian Egyptologists in April 2019.

The film begins about four months after Mostafa al-Waziri, General Secretary of the Supreme Council of Antiquities, announced in December 2018 that a 4,400-year-old tomb belonging to Wahtye, a high priest to King Neferirkare — who reigned during the Fifth Dynasty of the pharaohs — had been discovered. In the report, Waziri appears inside the tomb, telling the press that the tomb had never been touched until its excavation, making the discovery all the more valuable.

In the film, we see the excavation both from inside the tomb and outside of it. The team mostly relies on manual tools for digging, transporting the rubble and moving the ropes that carry the explorers as they descend into the tomb’s burial shafts.

The story is told through the film’s various protagonists from the expedition team, each of them revealing a side of the many secrets that were uncovered: how they inherited this job through generations; their enjoyment of the adventures it brings and the excitement of being the first person to touch these artifacts in thousands of years. The members of the expedition team speak with spontaneity, and share their own interpretations of — or, more accurately, impressions about — their findings. They begin each day by reciting verses from the Quran, drinking tea and smoking while they discuss the secrets of kings who were regarded as gods and priests that served a god in the form of a cat.

Hamada, one of the characters, is the most relatable due to his sense of humor. He rides his motorcycle everyday, venturing out “from the world of the living to the world of the dead,” as he puts it, with his manager behind him. Hamada works for the Ministry of Antiquities and is part of the excavation team. He’s a remarkable storyteller, and shares a lot of his knowledge on ancient Egyptian gods, while also telling viewers about the work the expedition is doing in discovering the secrets of this tomb. The team also excavates outside of the tomb, and find that various other sarcophagi and statues are buried nearby, so in parallel to the quest of unlocking the secrets of Wahtye and his family, another search takes place in an attempt to know what else lies beneath the sands of Saqqara.

While Hamada and another worker descend into one of the burial shafts, they discover an array of small mummies that Hamada suspects are cats. One of the mummies, though, catches his attention since it’s significantly bigger than the others.

Hamada tells us that when he returns home he can sense that the cats are afraid of him. He believes it’s because they know what he’s done to their ancestors’ mummies earlier that day.

But let’s leave Hamada for now and move on to another character in the film: Salima Ikram, an archaeozoologist and Egyptology professor at the American University in Cairo who specializes in animal mummies. Salima studies the mummies, radiographs them and confirms that they are in fact cats. She assumes they were presented as sacrifices to the gods. As for the larger mummy, Salima is very excited to study it and looks at the drawings on its linen cover which has a face, but not a cat’s face — there is a mustache and humanlike eyes. After examining the mummy she makes the conclusion that it’s a lion cub, which is the first proof we have that lions used to live between the desert and cities of our ancestors.

During the excavation, the expedition uncovers a small statue of Sekhmet, goddess of warriors and healing, depicted as a lioness. She is considered one aspect of a dual goddess with Bastet, the other aspect, depicted as a cat. This is when it becomes clear that the mummies of the cats and cub were in fact intended as offerings to the goddess Sekhmet/Bastet.

Going back to the original tomb, we follow hieroglyphics experts trying to decipher what the beautiful inscriptions on the walls of the tomb are telling us. But instead of providing us with answers, the inscriptions actually pose more questions. One of the experts shouts “Oh, my days!” when he reads something that makes him suspect that the tomb could in fact belong to Wahtye’s brother, not Wahtye himself.

The expedition continues on its mission to find the truth of who this tomb belongs to. Will they find the mummies of the priest and his wife, mother, and four children, who are mentioned in the inscriptions?

With hope and fortitude, the tomb’s shafts are dug, and Hamada makes his way down one of them. He stands in front of one of the wooden sarcophagi and expresses how happy he is to be the first to witness what was built by the ancient Egyptians. However, while he is mining he ends up cracking the wood, which complicates the process of defining the rest of the remains in the wells.

This obstacle, however, proves surmountable when they bring in Amira (pictured at the top of this piece), a rheumatology professor at Cairo University’s Qasr al-Ainy teaching hospital. She analyzes the bones and confirms to the team that they in fact belong to Wahtye’s family. Amira also has a theory on how Wahtye died, based on the density of his bones: malaria. And so the work of the expedition continues, opening up more questions and revealing more stories.

According to the film, the expedition unearthed more than 3,000 artifacts varying between statutes and sarcophagi, along with an old board game resembling chess.

Perhaps by the time you visit, dear reader, all of these discoveries will be available to the public, and you can experience some of the excitement yourself, especially in light of the fact that all the treasures found so far in Saqqara only amount to one-third of what was buried deep in the earth in that area, thousands of years ago.

AD
You Might Have Missed
What we talk about when we talk about trees
Where do old lesbians go to die?
Mugamma revisited: Reimagining the building and the square
Carbon Colonies & A Green New Deal
AD
Ahmed Wael
5 articles on Mada

Topics
Related
Palestine
Epigraph
Budour Hassan | Palestinians do not leave the labyrinth even after their death.
January 25 2018
Magdy’s square
Heba Afify | As his world shrunk to the size of a house, Madgy’s memories became a source of comfort and distress
archaeology
Excavation of King Khufu’s second solar ship unearths vessel’s largest plank
Jano Charbel | Excavations of Pharaoh's second solar ship, due to be completed by 2020, continue
Egyptology
Teaching Egyptians to read ancient plants: Pioneering the field of archaeobotany in Egypt
Meredith Brand | The second in our series on Egyptology, archaeology and heritage management in Egypt.