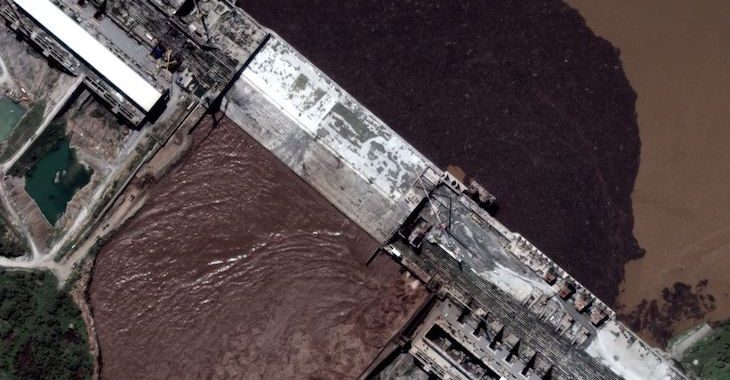 Egypt, Ethiopia and Sudan reached an agreement on Tuesday to restart negotiations over Ethiopia’s mega-dam under the auspices of the African Union in a joint teleconference meeting between the foreign affairs and irrigation ministries of the three countries, according to an Egyptian government source familiar with the negotiations.

The new round of talks will last for one week with the aim of formulating an initial draft text that would include all the basic points of agreement regarding outstanding issues related to the process of filling and operating the Grand Ethiopian Renaissance Dam. Egypt, which relies on the Nile for more than 90 percent of its water supply, has long sought to finalize a legally binding agreement before the dam is completed and becomes operational.

According to the source, the preliminary draft will be based on the three drafts each country sent to South Africa — the current president of the African Union and sponsor of the talks — after the third round of negotiations that took place over summer broke down following disagreements over a number of key issues.

However, the source questioned whether the new round of talks would succeed in reaching a final agreement, pointing to outstanding differences between Egypt and Ethiopia on those same issues, which include legally binding drought mitigation protocols and a dispute resolution mechanism, as well as differences between Sudan and Ethiopia with regard to the operation of the dam in cases of heavy rains and flooding.

Tensions have simmered between Cairo and Addis Ababa since 2011, when Ethiopia announced plans to build the 75 billion cubic meter mega-dam, pitting Ethiopia’s push to generate electricity for domestic consumption and export against Egypt’s and Sudan’s concerns about downstream water flow and transboundary water management.

Ethiopia last week accused US President Donald Trump of inciting a “war” over the dam after the US president said Egypt might blow up the dam if the “dangerous situation” is not resolved during a conference call with top Sudanese officials and Israeli Prime Minister Benjamin Netanyahu following the announcement of the start of normalization between the two countries. “They will end up blowing up the dam,” Trump said, referring to Egypt. “And I said it and I say it loud and clear, they’ll blow up that dam. And they have to do something.”

While Cairo did not officially respond to the comment, the head of the Defense Committee in Parliament is cited in the London-based newspaper Asharq Al-Awsat as saying the statement does not reflect Egypt’s position and that President Abdel Fattah al-Sisi has stressed on several occasions the need to reach a negotiated solution.

Meanwhile, an Egyptian source familiar with Egyptian-Sudanese relations said that the talk of military action against the dam was of deep concern to Khartoum, as it could cause enormous flooding in a country that already suffered massive floods earlier this year.

The US became involved in the dispute in November 2019 after Egypt called for international mediation as tripartite talks between the countries faltered. Delegations from Ethiopia, Egypt and Sudan met three times in Washington DC earlier this year. Ethiopia pulled out of the final meeting in late February where a deal was expected to be signed, calling on the US to allow time for more internal consultations.

In September, the State Department said the US was suspending some aid to Ethiopia under Trump’s request over the “lack of progress” in the talks in a move that angered Addis Ababa. US officials and congressional aides familiar with the matter told Foreign Policy that the decision could affect up to $130 million in aid to Ethiopia, but that the details of the cuts are not yet set in stone and that the finalized number could amount to less.

According to the Egyptian government source, there are fears in Cairo that Addis Ababa will not agree to a legally binding deal in the latest round of talks and is simply maneuvering to stall for time until South Africa’s term as president of the African Union ends in February and is replaced by Congo in addition to a possible change in White House leadership following next week’s presidential elections.

This sentiment was echoed by a European diplomatic source closely following the talks as well as the internal situation in Ethiopia, which saw a massive outbreak of unrest following the June 29 murder of musician Haacaalu Hundeessa, a prominent voice during protests by ethnic Oromo for political reforms. Leading opposition figure Jawar Mohamed was swept up in an arrest campaign and more than 2,000 people have been charged with crimes in relation to the violence, according to Ethiopian Attorney General Gedion Timothewos. Abiy is also contending with growing unrest in the northern region of Tigrary, where local officials went ahead with parliamentary elections in defiance of the federal government’s postponements due to COVID-19 that have kept Abiy in power beyond his mandated term.

For Abiy, the GERD continues to be a major factor in drumming up political support ahead of the elections, according to the European source, who said that the Ethiopian prime minister does not appear “at all” prepared to sign on to a binding agreement before Ethiopia holds elections scheduled for next summer. Abiy would not want to sign on to an agreement that might weaken him politically and subject him to accusations from political rivals of making unnecessary concessions over the dam, the source added.

In July, Ethiopia quietly celebrated the first filling of the dam, saying the first-year target of around 4 billion cubic meters had been reached despite the absence of a final agreement. The announcement from Abiy’s office indicated enough water had accumulated to enable Ethiopia to test the dam’s first two turbines.

The European source said that Ethiopia will probably move ahead with the second stage of filling, which is set to be about 13 billion cubic meters, at the onset of the rainy season in 2021. At the same time, Abiy informed the Ethiopian parliament several days ago that there were obstacles that might prevent the completion of the dam but that they were moving forward, determined to complete the project.

Meanwhile, the head of Sudan’s Sovereign Council, Abdel Fattah al-Burhan, arrived in Cairo on Tuesday for a meeting with Sisi. “The meeting saw discussions over the GERD, with a consensus reached over the water issue facing both countries, deeming it a national security issue,” Egypt’s presidential spokesperson Bassem Rady said.

According to a Sudanese official and two Egyptian sources familiar with Egypt-Sudan relations, Burhan assured Sisi that Khartoum is committed to working with Egypt to reach an agreement on the dam, in contrast to reports that Sudan was preparing to accept a bilateral agreement with Ethiopia.

Yet the most important issue discussed by Sisi and Burhan was the agreement by Sudan to begin a process of normalization with Israel that was announced on Friday, according to the Egyptian and Sudanese sources. The deal will net billions in aid money for Sudan and potential immunity for top Sudanese military figures.

Over the past two weeks, Burhan has sent two delegations to Cairo to inform Egyptian officials of the imminent deal. Egyptian sources said Cairo fears the normalization agreement would cause Sudan to move toward cooperation projects with Israel and Ethiopia in ways that could impede progress in the GERD talks. Israel has a bevy of water-intensive projects in Ethiopia.

“The matters are complex and intertwined because Sudan and Israel are talking about the prospects of agricultural and industrial projects,” the Sudanese source said. “Ethiopia has proposed to Sudan a separate path for bilateral cooperation that includes energy and agriculture. These are all matters related to the Nile waters in the final outcome and therefore are matters that touch the core of Egyptian national security.”

Energy supply deals have come into play as bargaining chips for both Egypt and Ethiopia. The mega-dam is expected to give Ethiopia an electricity surplus, from which Sudan could benefit with a cheap supply of power. Yet Cairo also secured a deal to supply Sudan with electricity earlier this year, with the national supply grids of the countries being officially connected in April. Egypt began exporting electricity to Sudan at a small initial capacity of 70 megawatts. The project’s second phase is due to be up and running within the next seven to nine months, and aims to increase the quantity to 250 megawatts.

Topics
Related
Renaissance Dam
GERD talks stumble yet again, with no prospect of binding agreement
Ethiopia responded on Monday by postponing negotiations until August 17
Renaissance Dam
A decade of dispute: The battle over the Grand Ethiopian Renaissance Dam
"The answer to all of these types of concerns is cooperation and a degree of economic integration."
Renaissance Dam
Egypt asks UN Security Council to intervene in GERD dispute, Sisi says Egypt committed to diplomatic solution
A number of official bodies had told Sisi that the Khartoum agreement would weaken Egypt’s position.
Renaissance Dam
Egypt’s bet on international pressure yields scant results as GERD talks remain at impasse
Egypt's water minister blamed the lack of progress on “intransigent positions” held by Ethiopia