Almost 70 days after being displaced when Province of Sinai militants seized control of their villages, and weathering subsequent unfilled promises from the Armed Forces that they’d be able to return swiftly, the residents of four villages in the Bir al-Abd region of North Sinai made their way home last week amid jubilation and a military escort.

That happiness was short-lived, however. Eight residents have died in blasts from improvised explosive devices in the intervening week. The situation in the villages remains fraught with danger as Province of Sinai members continue to roam about Qatiya, Iqtiya, Ganayen and Merih Their presence is a potential trigger for renewed clashes with the Armed Forces, which would threaten the stability of civilian life. 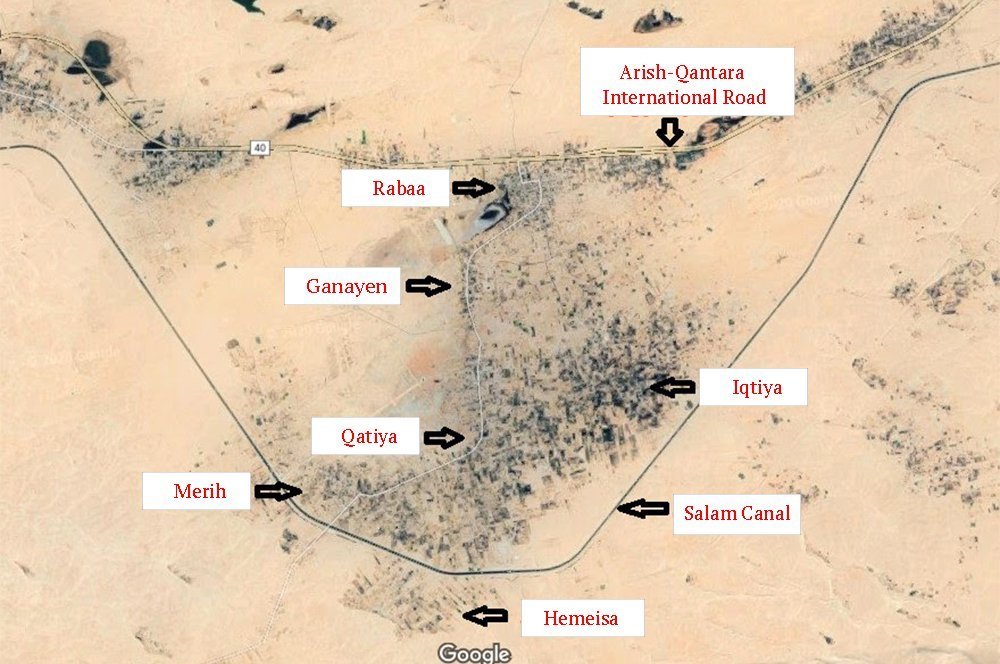 As has become common in the government and military’s handling of the security situation in North Sinai, the preparations for residents’ return were not announced via the governorate nor military spokesperson’s official channels. Instead, Bir al-Abd tribal sheikhs spread the details through their Facebook pages. Residents were skeptical, however, as the same sheikhs’ promises in early September had gone unfulfilled and only a handful of residents from the village of Ganayen were allowed to return.

The rest of the residents of Ganayen and the other three villages did not make it past the Rabea military camp, where they had to submit identification documents and sign a declaration to report any non-residents, foreign objects or weapons that they come across upon their return to the villages.

At the beginning of October, the Armed Forces allowed some of the residents of Ganayen to return to the village to check on their houses and harvest their date crops but barred them from staying in their homes.

Shortly afterward, local newspapers issued calls for residents to turn up for a march on October 4 and 5 to the securitized area of Ganayen. While the press did not indicate who was organizing the march, it coincided with nationwide celebrations for the anniversary of the October 6 war.

Many residents who had been displaced from their villages did turn out for the marches, holding up Egyptian flags and chanting slogans in support of the Armed Forces. However, residents who spoke to Mada Masr added that even though they understood the marches to have been organized to celebrate the October 6 holiday, those who participated held onto the tacit goal of using the march to demand the return to their villages.

Indeed, residents made collective appeals to the military to allow them to return to their villages and to the president to intervene to end the people’s suffering before the start of the school year and the winter.

One of the banners raised by the people during the march in Ganayen, calling for the right to return to the villages

New promises were made to the villagers during the marches, but this time it was military officers who told the residents that a return was imminent.

“Within 72 hours, everyone will go back to their homes,” one of the officers told a resident in recorded footage of the march.

“We are doing the last survey. There are many people [militants] inside. For my sake, if you want to help us, I want two or three people to monitor this area for me,” another officer said in the recording. “The sheikhs have a meeting today at noon.”

While residents took to the streets for the two-day march, there were disruptions in the communication networks in Bir al-Abd, which residents understood as the result of the military conducting a survey to detect and dismantle any explosives in the villages as a precursor to their return.

Residents of the four villages said they felt despair due to their prolonged displacement and feared it would become more or less permanent, as had happened to the residents of Sheikh Zuwayed and Rafah where people never returned to their homes after their mass displacement in 2015. Many of Bir al-Abd’s residents had resigned themselves to trying to return home one more time before the winter in order to gather their winter clothes and blankets, according to residents who spoke to Mada Masr. However, some of the residents think that the October marches may have changed the equation on the ground, especially as it was the first time North Sinai residents were able to direct their grievances en masse to officials.

On October 9, the tribal elders took to their social media pages to announce October 10 and 11 as the dates on which the residents of all four villages would be able to return, designating a location in Ganayen as the meeting point for returnees.

According to the residents who spoke to Mada Masr, the scene that unfolded as residents reentered their villages was overwhelmingly joyful. Hundreds of residents, some of whom were walking on foot, others riding in microbuses, pick up trucks and cargo tricycles, flocked to the villages. There were men waving their headscarves, women ululating and people chanting for the Armed Forces, with officers in heavy-armored vehicles lining the road to the villages. Army personnel were also stationed by the railway line near Ganayen to check the identification cards of those returning to the villages.

In the village of Qatiya, the residents’ joy was interrupted when they saw how damaged some of their houses were. Several buildings had been partially or totally destroyed by airstrikes, tank shells or other explosives. Others found their homes completely unscathed, with the doors locked as they had left them, as one Qatiya resident told Mada Masr. The village, however, had turned into a minefield, the resident says.

Pictured above and right: Severe damage to homes as a result of the clashes between the Armed Forces and the Province of Sinai 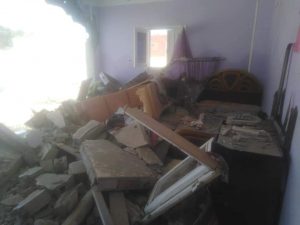 When the first group entered their houses on October 10, residents discovered their houses had been booby-trapped: refrigerators and doors had been attached to a trigger wire. The residents believe that Province of Sinai militants planted the explosives with the intention of detonating them during the military’s combing operations.

Not all residents were able to spot the traps, however. On the same day residents returned, an explosive device planted in one of the houses killed two women and injured the husband of one of them. A medical source in Bir al-Abd Hospital, where the victims were transferred, confirmed to Mada Masr that the women were dead on arrival to the hospital. According to local and medical sources, a few hours later another explosive device detonated in the yard of a house in Ganayen, killing another woman and her baby daughter immediately.

The funeral of one of the civilian casualties

The explosions, coupled with the lack of electricity and water in all of the villages, drove most of the women and children to leave once again, while a small number of young men stayed.

On October 11, the water and electricity companies sent crews to the villages to repair the malfunctions and provide villagers with generators to help pump water up from wells. The restoration of basic utilities helped some families to settle back into their villages.

Some of the residents of Qatiya who work as vegetable traders decided to organize a makeshift vegetable market inside their village in an attempt to show that life has started to go back to normal again. The residents of Bir al-Abd refer to the village of Qatiya and its neighboring villages as the “Green Triangle” due to the agricultural significance of the area to the whole governorate. The area is known for its palm trees, olive and pomegranate farms that are the source of livelihood for hundreds of families, in addition to hosting the main food storage facilities in North Sinai. When the security situation deteriorated and residents were displaced in the summer, it led to a crisis in vegetables and other food commodities in the Bir al-Abd region.

A makeshift vegetable market in the village of Qatiya

With October 11 set as the date for the residents of Iqtiya to return, the residents of Qatiya walked to the crossroads between the two villages to welcome the returning families of Iqtiya. Iqtiya residents were greeted with chants of “With our blood, with our soul, we will not let Sinai go.”

Iqtiya is the largest of the four villages, serving as a headquarters for Province of Sinai during its occupation of the area. This made the return to Iqtiya more complicated. Residents waited to return for several hours as clashes played out between the Armed Forces and Province of Sinai militants. A resident told Mada Masr that shortly after they entered the village, they found the bodies of four militants who appeared to have recently died between the houses.

In an attempt to eschew the booby traps, army personnel told the residents of Iqtiya not to enter any house that was closed before notifying security forces, who would in turn safely open the houses. As for open houses, residents were allowed to enter and inspect them carefully.

One of Iqtiya’s residents took to Facebook to say that residents spent the day finding booby traps and the army detonating them. “There were constant instructions to stay away from a certain spot. Minutes later, we’d hear an explosion,” he said.

Despite all the precautions, the day did not pass without bloodshed. When the evening came, a bomb exploded near a car carrying five members of the same family who were leaving the village. Four of the family were killed in the blast (three women and a two-year-old girl), while the fifth was injured. They were all transported to Bir al-Abd Hospital by other residents, according to local sources.

While residents tried to grapple with what the militants left behind, the Province of Sinai were not far away from the scene, as they started to appear on the outskirts of Qatiya and Iqtiya.

In Qatiya, the militants warned the families against returning and settling in the village. One of the residents told Mada Masr that an armed militant threatened his neighbor. “This time, the army allowed you to come back, but next time, we will not allow it,” the militant reportedly said.

In Iqtiya, the presence of the Province of Sinai was more pronounced, as three militants spent Sunday night monitoring groups of young men who passed the night in the village. In the morning, the militants were gone, but they came back shortly before the evening of October 12, clashing with the Armed Forces before disappearing again after dark, according to the account of one of the residents.

The sudden and sporadic appearances of Province of Sinai militants in and around the villages has stoked fears among returning residents that the situation could deteriorate in the coming days. The danger continues to loom large for the residents due to the booby traps that were planted in the houses, one of which exploded in a house in Merih on October 14 during the attempt to dismantle it, killing the owner of the house, a ranking officer and three soldiers.