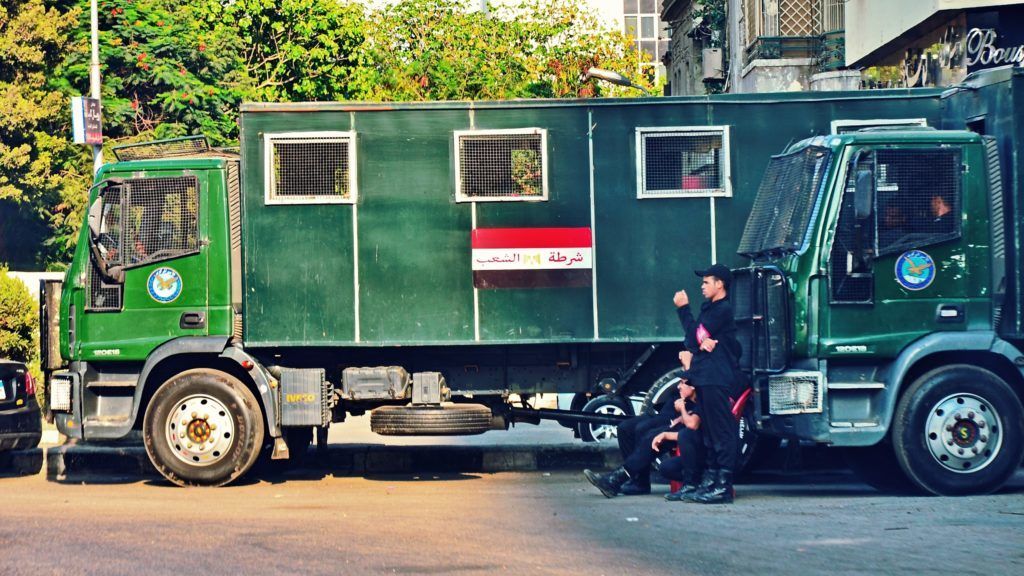 Security forces have deployed in Tahrir Square and in areas around downtown Cairo in recent days, with armored trucks stationed in the streets and police randomly stopping and searching passersby.

The move comes as the first anniversary approaches of the street protests that erupted in Cairo and other cities on September 20, 2019, in response to calls from former army contractor Mohamed Ali, who posted videos online accusing President Abdel Fattah al-Sisi and top army generals of acts of corruption and squandering public funds.

The rare protests were followed by the largest arrest sweep since Sisi formally came to power with thousands detained, including activists, lawyers, journalists, university professors, opposition figures, and ordinary citizens.

In recent weeks, Ali — who is in self-exile in Spain — has once again called for street demonstrations to mark the anniversary of the September 20 demonstrations. Hashtags with thousands of shares have sprung up both in support of and in opposition to the protest calls.

Amid the heightened security presence in downtown Cairo, passersby are being randomly stopped and searched by police who go through their belongings and check the content of their mobile phones, according to a number of accounts on social media. Police conducted a similar campaign last year in the wake of the protests.

One of those randomly searched last week told Mada Masr that he was trying to avoid downtown as he was heading to Garden City but was nevertheless stopped by police in an area near the Opera House in Zamalek, across the bridge from Tahrir.

“A security official stopped me and took my cell phone and unlocked it,” he said. “Then he gave it to another security official and told him to hand it to the officer. There was a police truck and three officers nearby. One of them went through my cell phone but there wasn’t anything on it because I had deleted all the apps. He then took my national ID card and checked it while another questioned me. The third officer took my bag and opened the notebooks inside and began carefully reading every word.”

According to the passerby, the officers continued their questioning, photographed his ID and asked why he was heading to Garden City. During the half-hour he was held there, an additional two passersby were stopped and searched before he was eventually let go.

The redoubled security measures also extended beyond Cairo with police forcing a number of cafes in cities around the country to shut down on Monday, according to several sources who spoke to Mada Masr on condition of anonymity.

The owner of one cafe in New Cairo’s Rehab district said that police arrived at his establishment at around 7 pm on Monday evening and ordered him to close for the night without giving a reason. Meanwhile, in Shubra al-Kheima, an eyewitness said that security forces closed down a number of cafes in the area and arrested some of the staff when they later reopened. The staff were eventually released, the eyewitness said.

Many speculated that the closures were intended to prevent large crowds from gathering to watch a  highly anticipated football match between Ahly and Ittihad scheduled for Monday evening where Ahly could have secured the league championship with a win.

The government denied that it had closed any restaurants or cafes. Cabinet spokesperson Nader Saad said the heightened security measures and closures were nothing more than rumors and had no basis in truth, according to Al-Masy Al-Youm.