In this week’s edition, we examine our relationship with the city. Can an individual reclaim her sense of belonging to Cairo — the city that has witnessed our collective defeat — through a series of solitary walks every morning? Hadeer El-Mahdawy shares her experience. As you read this issue or take your own walk across Cairo, listen to this playlist that has accompanied Hadeer on her daily morning excursions for more than five months.

I unlock my building’s gate and walk out onto the empty street. I stand still for a few seconds, inhaling the fresh morning breeze. I close the gate behind me, spray some sanitizer onto my hands then wander through the streets of Cairo, rediscovering the city as I rediscover myself. On my playlist, Billie Eilish sings: “Breathe the air again, it’s a beautiful day/ I wish this moment would stay with the Earth/ Some primal paradise.”

In mid-April, after one month of self-isolation, my bouts of chronic anxiety were at a peak, as a result of the pandemic and related stress. Spending so much time at home had led to a growing fear within me of dealing once more with the street: the street was rife with corona, no doubt, and it had never been friendly to women. Yet staying indoors only made me more anxious. In response to my therapist’s and some friends’ advice to start working out, I decided to take daily walks as a form of exercise. And so a new relationship started to develop between me and my favorite city of all, Cairo. My feelings for the capital can be summed up in what Salah Jaheen wrote of Egypt: I love her and I curse her with a passion, “like a disease.”

I’ve always loved Cairo more than any other city in the world, and have always lamented her wasted potential: her history, perpetually under threat of obliteration, and her beauty, hidden under layers of dust and poverty and violence and fear. Every time I left I would be excited to come back, and every time that excitement would rapidly wear off. Yet I have always loved her, especially in her moments of victory — our moments of victory. I’ve even loved her in moments of defeat, which — it seems, sometimes — have turned her into a stranger: our favorite places are no longer our favorite; they’re no longer even ours. 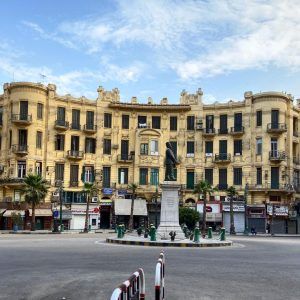 In previous attempts to take walks on the streets of Cairo during the past few years, I’d pick catastrophic times to do it, such as five or six in the evening, or nine or ten in the morning. Apart from the noise and the crazy crowds that fill the streets during such hours, I’d find myself yelling at someone almost every minute, because they’d harassed me, or stepped in my way to sell me a cheap bottle of perfume or advertise a clothing store in a passageway nearby, or almost hit me, with their body or their car, on purpose or not. Endless nuisances like that. Needless to say, my walking habit did not last long; I eventually stopped trying, and considered buying a treadmill to exercise at home, in peace. Before I’d tried to make a habit of those walks, I’d spent years paying gym subscriptions only to visit twice before calling it quits. To be honest I was never a big fan of working out in closed spaces. 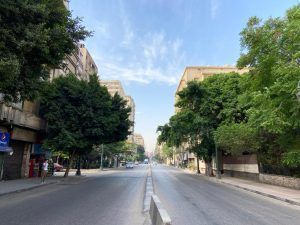 In April, however, I decided to give those walks another try. I timidly began to take to the streets again, particularly those of Downtown — the city’s historical center and her beating heart: always packed, always nerve-wracking, sometimes friendly. Downtown is home to all of my memories, the good and the bad — all of my triumphs and my failures as well. It is a window into the city’s soul: you can truly see her through it, and find out what kind of state she’s in. I’d frequented Downtown ever since I was a little girl, but back then it seemed more welcoming; fascinating; dream-like. It also seemed like a huge maze, one in which I could easily get lost if I let go of my parents’ hands in a moment of absent-mindedness. But its features have changed over the years, the same way my own relationship to it has. I eventually came to know the area too well; I know its streets and its endless nooks like the back of my hand, and this knowledge has often been a source of security but sometimes also boredom. Today it feels smaller, sometimes even suffocating; scary. But I never stopped loving it either, like a mother who constantly complains of her children yet would never allow anyone to speak ill of them. 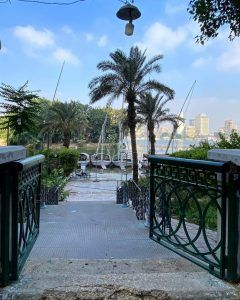 This time around, I decided to walk in the early mornings, sometime between six and seven o’clock. My lifestyle has changed, after all — I no longer stay up late, and I often find myself with a lot of time on my hands every morning, searching for ways to kill it. I also want to avoid people; the random cough here or sneeze there. I dress in sports attire, hoping to get by with no trouble — the impending end of the world has not stopped harassers from their activities, after all. With a fanny pack around my waist, I take a deep breath and I’m on my way: mask on my face, sanitizer bottle in my hand, headphones on my ears. And I have my phone, of course, documenting every beautiful thing I see; memorizing the city in case I’m forced away from her once more, capturing those small moments of joy so they’d keep me company later in times of misery. 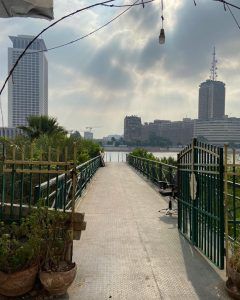 For me, the city’s center doesn’t stop at Downtown’s main streets — Qasr El Nile, Talaat Harb, Champollion, Sabri Abu Alam, Sharif, Mahmoud Bassiouny, Huda Shaarawi, Mohamed Mahmoud and Tahrir (street and square) — but also includes its side alleys and narrow passages, unknown to the casual visitor, and further extends to the periphery of the neighborhood: Mounira, Garden City, and the long stretch of Qasr al-Aini Street that separates them. These are the places my walks usually take me to, but sometimes I chase the Nile until Dokki or Zamalek, in an attempt to observe the life at its banks, which may very likely change in the upcoming months if the water’s levels were to diminish as a result of the neighbors’ dam. 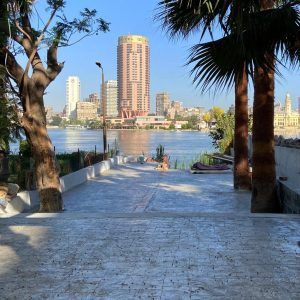 Back in April, when I first embarked on my morning walks, Cairo was almost empty. I’d be nearly alone on the street; no cars and no passersby, only cute cats and dogs who would later become my friends. For the second time in my life, I owned the city. The first time was for a few days nine years ago, but then my friends and I had owned it together, and those friends are now shunned, banished, or in jail. In those recent walks I felt as though I were seeing Cairo for the first time; the balconies with their colorful flowers, the arched doorways of the buildings, the storefronts and old cafés, the trees. I also saw the homeless; neighbors I’d never seen before, for they always spend the night then pack up and leave in the morning. I saw them, surrounded by dogs, watching over them as they slept.

One homeless man in particular caught my attention. He used to sleep on the ground, then he somehow came into possession of an old armchair, which seemed to make him a little happier; I’d notice the smile on his face as he sat there, smoking a cigarette. A few days later, however, I saw him slouched on a large bag of sand, a dejected look in his eyes. It made me think of how oppressive Cairo can be, just like her Arabic name implies.

As time went by, life began to seep back into the city, and — gradually — it was no longer mine. People flowed back onto the streets, on their way to work in the early morning; more cars, more pollution, more anxiety as I walked. Back to yelling at harassers who are often audacious enough that their comments pierce through the loud music in my ears, and sometimes they’d even block me as I walked, although I kept a brisk, athletic pace.

Over the past couple of months, as the wave of sexual assault testimonies rose, I’d often find myself inclined to stay home for a few days, not because I was afraid but because I was exhausted, and, quite frankly, fed up. I was tired of fighting for the simple right of walking down the street in peace, tired of screaming at everyone: whoever throws a lewd glance my way, or a suggestive smile, or a slimy comment. I later realized the depth of my anger at the daily violations we are subjected to as women in this country, the seeming absence of any real possibility for justice, and that I would never get used to that. But little by little I started to take my mother’s advice and try to control my outbursts; I went back to ignoring most of the disruptions I encountered, in an attempt to prevent my entire day from being ruined. I have, after all, started walking to add a bit of sunshine to my routine; to lift my mood, get my blood flowing and breathe whatever fresh air my face mask would let through. 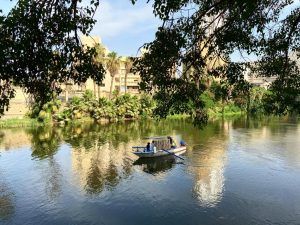 This time I wouldn’t allow the city I love to defeat me once more. I hadn’t been aware of my deep-seated need to reclaim the city until I was passing through Tahrir Square one morning, listening to my usual playlist, when I heard Soad Hosni say: “The film stopped, frozen/ Now we can ponder the image/ No detail missing/ Everything speaks, articulate/ wordless, voiceless.” Salah Jaheen again. I could feel the tears gather in my eyes, so I quickly skipped the track. Unlike when we collectively reclaimed Cairo years ago, today I feel no desire to make a statement of any kind. I am simply seeking a sense of belonging; to carve out a tiny space for myself that binds me to the city, one that keeps me — even if for a few moments every day — from indulging in thoughts of collective defeat. A few steps that keep me tied to the place and time and life that I occupy. 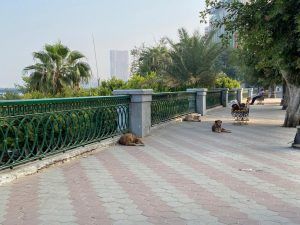 One step at a time then, I tell myself, and I measure my walks accordingly. I try to uphold the habit, to receive the smiles of strangers with an open heart, to tell the difference between someone who’s genuinely nice and someone who deserves to be told off. I smile, too, beneath my mask — at the boys and girls I see sometimes, on their bikes, or running, or walking like me. I search for my place in the “image.” My feet are sure and steady as I walk — perhaps I’ll believe that I still belong to these streets, to this city. For no matter how hard she’s tried to spit me out, I am still here, and she is still mine.

AD
You Might Have Missed
Mugamma revisited: Reimagining the building and the square
Carbon Colonies & A Green New Deal
What we talk about when we talk about trees
Where do old lesbians go to die?
AD
Hadeer El-Mahdawy
47 articles on Mada