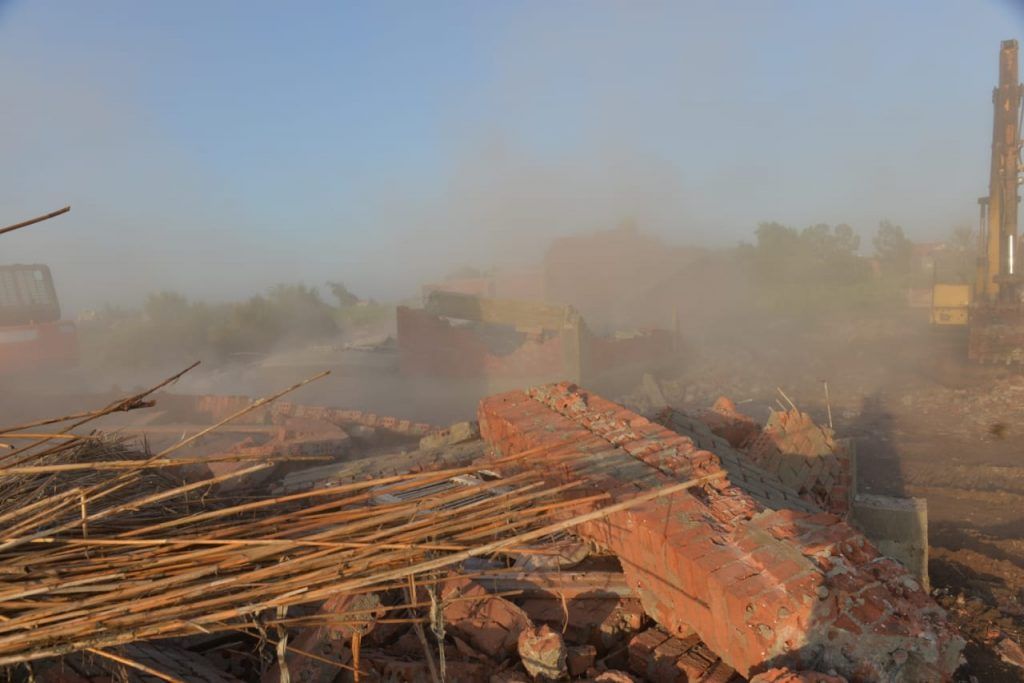 A nationwide campaign by Egyptian authorities to demolish informal buildings has sparked widespread anger across the country leading to a number of violent confrontations between police and residents.

On Tuesday, police arrested 234 people on charges of state and agricultural land violations as part of the campaign, according to a statement by the Ministry of Interior. In the village of Seriaqous in Qalyoubiya, where authorities carried out 22 demolitions, a video posted on social media shows residents cursing and hurling rocks at a bulldozer and the security forces accompanying it. Fifteen people were arrested and ordered by prosecutors to be held in remand detention for four days.

In a statement on Tuesday, the Interior Ministry denied that it had stopped carrying out demolitions of buildings built illegally on state-owned land in the governorates of Port Said and Suez in response to objections by residents.

In May, the government banned any form of construction for six months, whether for new buildings or modifications of existing ones, in a number of governorates, including Cairo, Giza and Alexandria. The move came as part of the government’s campaign to crack down on informal buildings by arresting violators of the Unified Building Law of 2008 and prosecuting them in military courts.

According to official estimates, there are some 2.8 million building violations nationwide. In Alexandria alone, the number of violations between 2011 and 2019 has topped 132,000.

In a press conference on Wednesday, Prime Minister Mostafa Madbouly said that unplanned buildings have come to constitute about 50 percent of the urban areas in villages and cities across the country. Between 1981 and 2011, Egypt lost up to 400,000 feddans of agricultural land to illegal construction, and an additional 90,000 over the past nine years, Madoubly said. He added that the cost of reclaiming one feddan is between LE150,000 and LE200,000, and that the reclamation of 90,000 feddans will cost up to LE18 billion.

Over the past several months, President Abdel Fattah al-Sisi has repeatedly called for the removal of structures built illegally on state and agricultural land and for reconciliation measures for construction violations.

In April 2019, Sisi ratified the Reconciliation Law on Building Violations that allows settlement with the state over building violations, with some exceptions such as those pertaining to safety standards. In July, the government announced that the application period for reconciliation would end on September 30. Yet Sisi said last week that the number of reconciliation requests submitted were no more than 10 percent of their targeted amount.

In a statement to the speaker of parliament on Wednesday, MP Haitham Hariri called for the reconciliation period to be extended for another six months, ending on March 30. “We don’t want to be surprised at the end of the legal period for reconciliation to find that millions of Egyptians have not submitted reconciliation requests and the subsequent difficulty of dealing with millions of violations,” Hairiri said.

Meanwhile, the head of the House Local Administration Committee, Ahmed Al-Sigini, said on Wednesday that the government had only succeeded in collecting LE12 billion out of the LE100 billion pounds it had pledged to collect. He added that instructions have been given to accept all reconciliation requests quickly.

At the press conference on Wednesday, Madbouly vowed to introduce new measures to facilitate the process of reconciliation. And in a move aimed at encouraging people to submit reconciliation requests, several governorates, including Cairo, Alexandria, Assiut and Damietta have announced a reduction in reconciliation fees for some building violations of between 20 percent to 50 percent.