GERD talks stumble yet again, with no prospect of binding agreement
By
Mada Masr 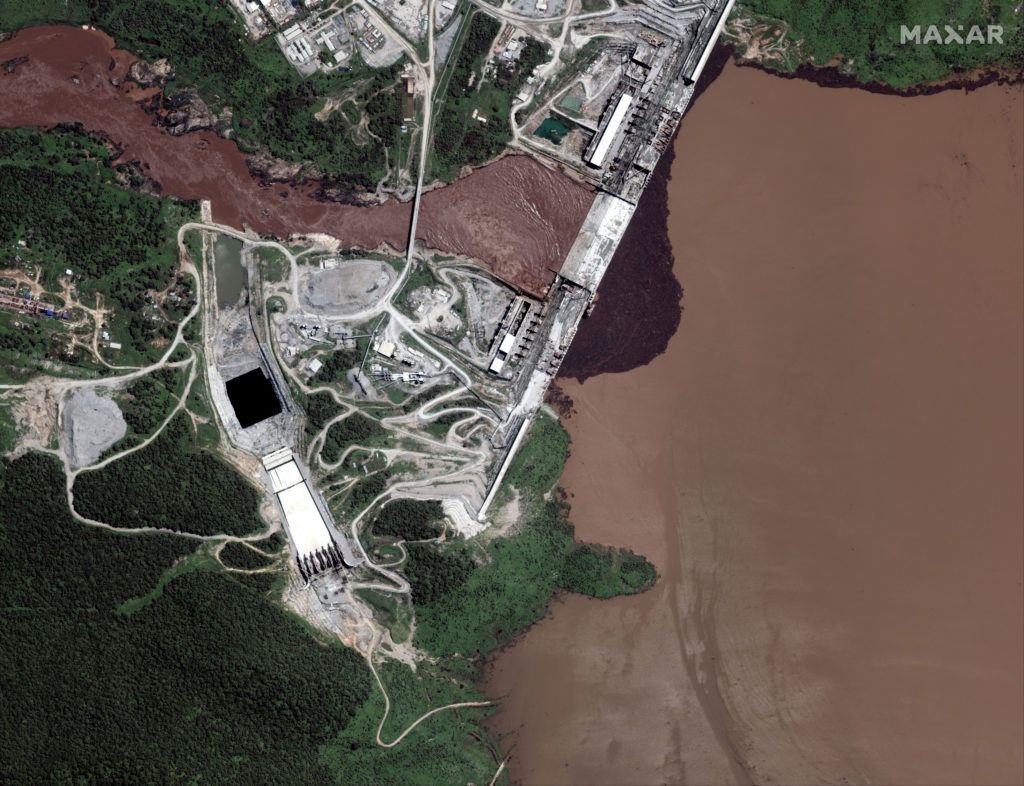 A handout satellite image shows a closeup view of the Grand Ethiopian Renaissance Dam (GERD) and the Blue Nile River in Ethiopia July 12, 2020. Satellite image ©2020 Maxar Technologies via REUTERS ATTENTION EDITORS - THIS IMAGE HAS BEEN SUPPLIED BY A THIRD PARTY. MANDATORY CREDIT. NO RESALES. NO ARCHIVES. MUST NOT OBSCURE WATERMARK TPX IMAGES OF THE DAY

After the latest round of negotiations between Egypt, Sudan and Ethiopia over the Grand Ethiopian Renaissance Dam last week,  Sudan announced on Sunday, on the eve of the resumption of the talks, their boycott of negotiations over what they called Ethiopia’s obstinacy.

Ethiopia responded on Monday by postponing negotiations until August 17; however, an Egyptian government source told Mada Masr on Monday that the negotiations have already severely stumbled, due to “the Ethiopian stances that do not help push matters forward and continue to break what was agreed on.”

Key issues that have been hindering the negotiations include a legally binding drought mitigation protocol and a legally binding agreement over the filling and the operation of the dam, especially in light of Ethiopia’s going ahead with completing the first stage of filling the dam’s reservoir, using the heavy rains in July, during the country’s wet season.

Ethiopia had renewed their proposal last week to work on a consensual but non-binding guideline on filling and operating the dam that has a capacity of around 75 billion cubic meters.

But the Egyptian source added that the Ethiopian position was not making a fair agreement possible, despite several mediations.

In late 2019 and early 2020, negotiations were held with the sponsorship of the World Bank and the United States, but Ethiopia pulled out of the talks. In June, Egypt asked the UN Security Council to intervene. Later in July, the three countries resumed tripartite talks based on proposals from Sudan, under the supervision of the African Union.

Last week’s negotiations followed a virtual African Union mini-summit in late July, chaired by South African President Cyril Ramaphosa, the current chairman of the AU. Statements from the AU, Sudan and Egypt after a plenary session on July 21 said that round two of the talks would look to secure a legally binding three-way agreement on filling and operating the dam.

A western diplomatic source also told Mada Masr on Monday that the United States had made a suggestion for the agreement to be split into two parts: one on filling the dam, which has a 75 billion cubic meter capacity in total, and one on future uses of the Blue Nile.

An earlier bid for an agreement under US observation at the end of 2019 and beginning of 2020 had pushed for one comprehensive agreement, but fell apart in February when Ethiopia withdrew from meetings in Washington DC.

On July 28, Egypt’s President Abdel Fattah al-Sisi said that his country will continue to negotiate and will not resort to other options, referring to military actions to settle the dispute, adding “The issue of water for us is that of our very life. I assure you that our pursuit is fair.”

A Western diplomatic source , told Mada Masr that Sisi’s statements reflect awareness of the limitation of international support that Egypt might get, in case it seeks political or legal pressure on Ethiopia. The source clarified that none of the UN Security Council member states seem willing to hold serious discussions over an international resolution demanding Ethiopia commit to a binding agreement. The member states will have to observe the development of the talks supervised by South Africa, but most of them do not want to get involved in the details of that case, he added.

He also expected the talks to continue stumbling until Ethiopian Prime Minister Abiy Ahmed wins the elections next year, which will put him in a better position to sign a legally binding agreement — especially after achieving a domestic political victory by completing the first stage of the filling without an agreement as he previously vowed.

Another Egyptian government source, however, dismissed the notion that Ahmed’s stance is related to the internal political situation. He instead believes that Ethiopia is not willing to reach any agreement, now or later, adding that it will move towards initiating more projects on the Blue Nile next year, which means seizing more water.

The source believes that we have reached a very difficult point, after more than five years since the Declaration of Principles signed by all three countries in Khartoum in 2015, in which Egypt and Sudan recognized Ethiopia’s right to construct the dam while committing to reach an agreement over the filling and operation of the dam as well as development mechanisms. “Today we cannot imagine Ethiopia changing their stance without serious international pressure, which unfortunately does not seem likely,” the Egyptian official source added.

On the concerns over a potential water crisis and the consequences of completing the first stage of filling the GERD on Egypt’s share of water, the Permanent Committee for Regulating the Revenue of the Nile River said on Sunday that it is still too soon to estimate the volume of Nile floods, however the initial estimates highlight the possibility of a flood that is higher than average. The committee added that water revenues are currently higher than at the same time last year, due to heavy rains at the Nile sources.

Tensions have simmered between Cairo and Addis Ababa since 2011, when Ethiopia announced plans to build the US$4 billion mega dam, pitting Ethiopia’s push to generate electricity for domestic consumption and export against Egypt’s fears over water scarcity.