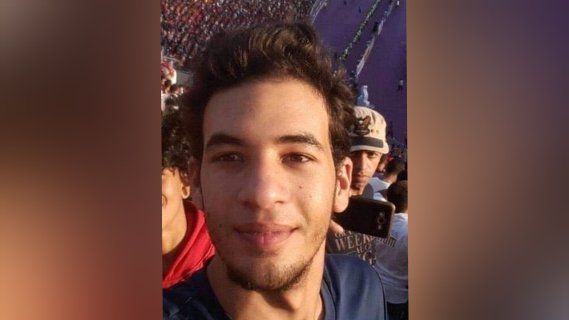 On July 6, the court renewed Ahmed Bassam Zaki’s remand detention for 15 days. Zaki, 21, is charged with assaulting multiple women and the general prosecution has been investigating him since his arrest on July 4.

The case began in 2018 when an American University in Cairo student accused him, in the Facebook group “Rate AUC Professors,” of sexually harassing her and two of her friends. Little by little, more users shared their own similar experiences with Zaki. When the post reached Zaki ‘s attention, he threatened to commit suicide if accusations did not stop. Shortly afterward, he left for Barcelona, where he’d transferred to a business school. An Instagram account, @assaultpolice, collected more than 100 anonymous testimonies from women who had been assaulted or harassed by Zaki, including a 14-year-old girl.

In its statement released on July 6, the general prosecution charged Zaki with “attempting to rape three women, one of whom was under 18 years of age, indecently assaulting them with force, and threatening them and others to engage in sex and not to break off relations with him, purposefully disturbing them by sending many messages without their permission, and using private social media accounts to commit these crimes thereby violating their private lives.”

However, Zaki’s sentence may ultimately come down to the judge’s interpretation of the facts of the case under articles pertaining to sexual assault in the penal code that have come under fire for being vague and insufficient to address sexual assault.

The minimum sentence for Zaki’s charges according to the Egyptian Penal Code is three years in prison, with a maximum of 15 years. If the prosecution were to meet the burden of proof for the court’s definition of rape, Zaki could be sentenced to life in prison or, in the case of the rape of a minor, death, per articles 267 and 268 of the penal code.

But lawyer Marian Sidhom does not have much hope that the defendant will be convicted of rape, even though the prosecution has received testimonies to that effect. She explains to Mada Masr that perpetrators usually go unpunished in crimes related to rape. The burden of proof outlined in the penal code is “forensic,” Sidhom says, but that becomes difficult given that the events under investigation happened three years ago. The charge the prosecution has put forward is “attempting to have sex with two women without their consent,” Sidhom says, because there is not forensic evidence.

Aside from the difficulty of proving the crime, there is an overall problem with the definition of rape under Egyptian law, according to Lobna Darwish, who heads the gender and women’s rights department at the Egyptian Initiative for Personal Rights. She explains, for instance, that while Article 267 outlines the punishment for rape (defined only as vaginal penetration), rape charges cannot be made under Egyptian law without forensic evidence. Instead, such allegations are classified as “indecent assault” — a charge that falls under Article 268, along with sodomy. Darwish adds that one of the cruelest, most violent allegations submitted in Zaki’s case involves sodomy. But according to the law, this will still fall within the realm of “indecent assault“ and come with a punishment of three to 15 years behind bars.

MP Mona Monier previously drew attention to these legal shortcomings in 2017, when she submitted a proposal to amend the penal code to stiffen the punishment for sexual assault and the abduction of women and children, proposing to allow courts to hand out death sentences in some instances. The proposals included amending the definition of rape in Article 267 to include oral and anal penetration. The MP also proposed to amend the term “indecent assault” in Article 269, replacing it with “sexual violation,” which includes “violation through rape, indecent assault, or using a child to satisfy the sexual desires of an adult or adolescent.”

Three years on, the proposed law has not been discussed, the MP tells Mada Masr. This, she says, is due to Parliament’s delay in considering humanitarian laws and family issues, compared to its preoccupation with public policy.

Monier adds that she proposed these amendments in coordination with the National Council for Childhood and Motherhood.

When she introduced the amendments in a parliamentary session, Moneer also suggested a sex education initiative that would teach children the boundaries of their bodies and their safe space to protect them from assault by older individuals. This proposal was met with harsh criticism, Monier says.

MP Mona Monier faced criticism and a smear campaign again when, in the wake of the Zaki allegations and calls for women to submit testimonies to the prosecution, she published a letter on Facebook addressed to the prime minister in which she criticized the absence of personal data protection for plaintiffs and witnesses submitting complaints of harassment or assault. Monier pointed to two problems. First, defendants’ lawyers have access to the personal information of complainants via police and prosecution reports, which gives space for the information to be used by relatives or lawyers to make threats or defame the complainants. Second, there is also the danger of personnel from the court or the police leaking personal data to the press, she wrote. A law to protect the “privacy and reputation” of plaintiffs has become a “necessity,” wrote Monier, whose demand comes against the backdrop of a long history of campaigning by feminist organizations for better legal protection for complainants in rape cases. Separately, MP Mohamed Foad made a proposal on Tuesday suggesting that the Public Prosecution should appoint women prosecutors to work on harassment and assault cases, arguing that this could encourage women and girls to report incidents of harassment, rape and assault, and could prevent them from being asked “uncomfortable questions.”

Nonetheless, Monier was smeared as pursuing fame in the press for her proposal.

The MP finds it illogical not to use women police officers for complaints related to women’s issues, officers who are instead limited to standing in front of malls and movie theaters during the holidays. “A woman cannot tell a man who is a police officer about details of her sexual assault. But if a women officer were there, she’d feel more assured.” The MP proposes having women officers in police stations, especially in neighborhoods that have had multiple cases of sexual assault.

On July 8, the government approved an amendment to some provisions of the Criminal Procedure Code. Examining magistrates can now protect complainant information in crimes related to “indecent assault and depravity.” A Cabinet statement asserted that the amendments aim to protect the victims’ reputation, the harm of which might make them reluctant to report the incident.

Lawyer Mohamed Abdel Aziz tells Mada Masr that perpetrators in sexual violence cases could evade punishment due to the statute of limitations. He explains that the crimes could go unpunished if victims do not file complaints within the prescribed period — just three months from the incident, in some cases. However, the general prosecution called on alleged victims to file complaints in Zaki’s case, even if the statute of limitations had expired. However, Abdel Aziz says that there are legal solutions to this predicament, the simplest being that “torture is a crime without a statute of limitations.” Victim testimonials and complaints included acts of torture, including holding them against their will without a justifiable reason, he says. This, however, Abdel Aziz says, will be up to the judge’s discretion.

AD
You Might Have Missed
Where do old lesbians go to die?
Mugamma revisited: Reimagining the building and the square
What we talk about when we talk about trees
Carbon Colonies & A Green New Deal
AD
Mohamed Tarek
4 articles on Mada