Coronavirus in Sinai: Fear and negligence as cases rise. Governor: ‘Expected and not disturbing’

June 22, 2020 – Residents of North Sinai have been living in anxiety over the past few weeks as there was a sudden surge in the number of positive cases of the novel coronavirus (COVID-19) recorded in the governorate’s two biggest cities: Arish and Bir al-Abd. The anxiety has been severely heightened because the surge coincided with end-of-year high school exams.

Despite these worries, many residents do not adhere to precautionary measures to protect against the virus. This has led several of the governorate’s health officials to warn of the possibility of COVID-19 infection rates increasing and the resulting pressure that would place on the health sector in North Sinai. However, the messaging coming from North Sinai’s governor lacks urgency, as he has made public comments that the current situation is “expected and not disturbing.” 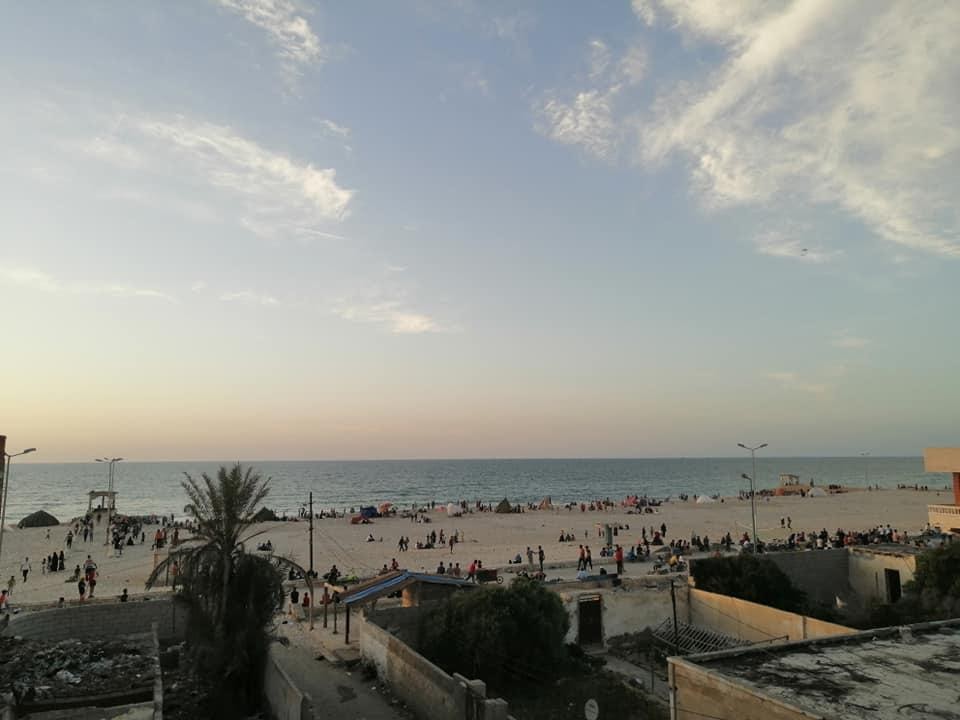 Crowds on a beach in Arish. Photo by Mada Masr.

In April, only one positive case of coronavirus had been recorded in North Sinai. The number increased to six during May, before increasing to 30 in June, with cases spread across the governorate’s three cities: Arish, Sheikh Zuwayed and Bir al-Abd. Three patients have died, according to information released by North Sinai’s health directorate on Monday, June 22.

Yasser Farouk, the director of epidemiology in Arish’s health directorate, has pointed to a notable increase in infection rates. In a recent radio interview, he explained that 11 new cases were recorded in the city from June 11 to June 20, compared to just one case per week during earlier periods.

Governor Mohamed Abdel Fadil Shousha described the increasing rate of infection in North Sinai as “expected” due to residents returning to the governorate following the Eid vacation and coming into contact with locals, according to statements he made to North Sinai radio on June 18.

What the governor said about carriers of the virus returning to North Sinai confirms what many locals told Mada Masr about the ineffectiveness of medical checkpoints set up at the governorate’s five entrances, which they passed through without detection.

Governorate officials set up medical checkpoints at Baluza on the Arish-Qantara Road, as well as at Gifgafa, Gadi, Sadr al-Heitan and Ras al-Naqb on the Ismailia-Awga Road coming from South Sinai. These checkpoints are still operational. Additionally, a medical checkpoint was set up at the military square in western Arish to examine people coming into the city from other governorates. Shousha noted in his interview with the North Sinai radio that this checkpoint had concluded its mission, as it was only for the duration of the Eid vacation.

The governorate’s health directorate engaged with the rise in coronavirus cases by announcing that it boosted the capacity of the Arish hospital by adding 19 intensive care beds and increasing the number of isolation beds from 12 to 36. It also disinfected several clinics and radiology and testing centers, which infected patients frequented before they were quarantined in the hospital.

Despite these measures, the June 13 announcement of the governorate’s second death details sparked anxiety and fear among. It was the first case detected in Sheikh Zuwayed: an elderly man whom locals said had not left the city in years, an indication that he contracted the virus through people he came into contact with who had not shown symptoms.

The fear grew when high school exams began. Displaced students from Rafah and Sheikh Zuwayed, as well as residents of Arish, travel by buses provided by the governorate to Sheikh Zuwayed to take their exams. Teachers and observers also traveled between the governorate’s cities to monitor exams. 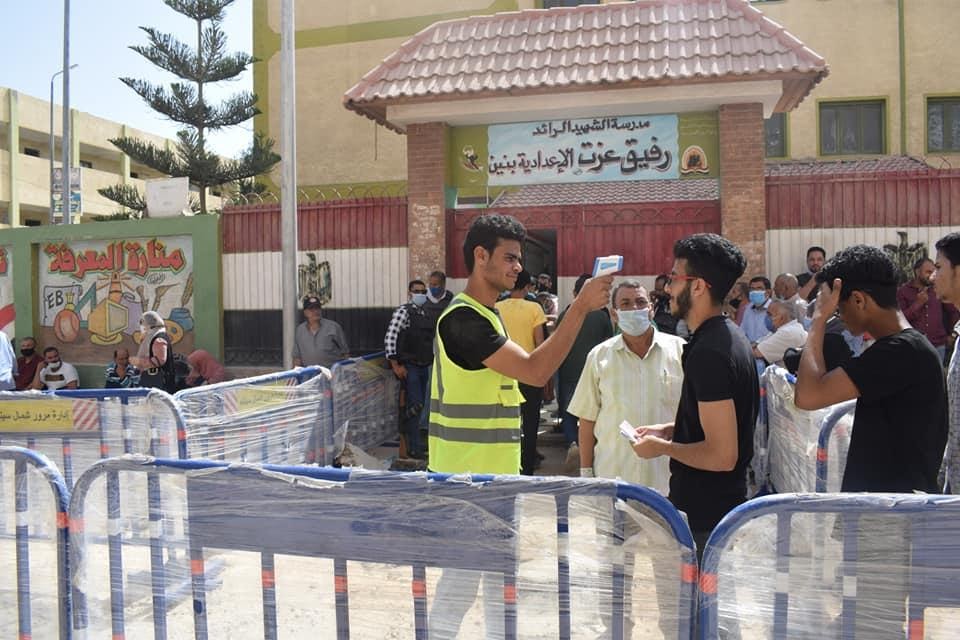 Outside a high school exam hall. Photo by Mada Masr.

It is notable that despite locals feeling afraid, many did not follow precautionary measures during the past two weeks, especially in Arish and Sheikh Zuwayed. Despite the government prohibiting gatherings, several residents held weddings around their homes, as wedding halls and youth centers remained closed.

Aside from weddings, Arish saw notable crowds at beaches and on the city’s corniche on Fridays. Few residents wore masks in the main streets and markets. This led Arish’s health directorate to warn in a Facebook post against a city-wide disaster if residents do not adhere to precautionary measures.

“If the situation in Arish continues on this trajectory with positive or suspected cases of coronavirus increasing as such, the isolation [wing] in the Arish hospital could reach its full capacity — if it hasn’t already — and we would not be able to provide spots for urgent cases and the elderly on ventilators in ICUs,” the health directorate warned.

Despite the announced increase of beds, the director of epidemiology in Arish’s health directorate said that the isolation wing at the city’s hospital had reached full capacity and would no longer be able to accommodate new cases. In turn, the health directorate directed several new cases to self-isolate at home. Farouk also identified specific areas as epicenters of the virus in Arish: the neighborhoods of Fawakhriya, Masaeed and Karam Abou Negila.

Some locals tried to offer suggestions through social media to limit the spread of the virus in the governorate, such as dedicating unused private or public buildings to isolating positive and suspected cases. Some users also offered buildings they own for use if medical services and the governorate were to ask it of them.

Responding to these suggestions, the governor asserted that the situation in North Sinai is not as disturbing as it is in other governorates. According to the governor’s comments at the time, there are seven patients in the Arish hospital and another five in Bir al-Abd, in addition to 37 patients self-isolating at home because their cases do not need hospitalization. He stressed that hospital capacity can accommodate more patients in need of quarantine if necessary. 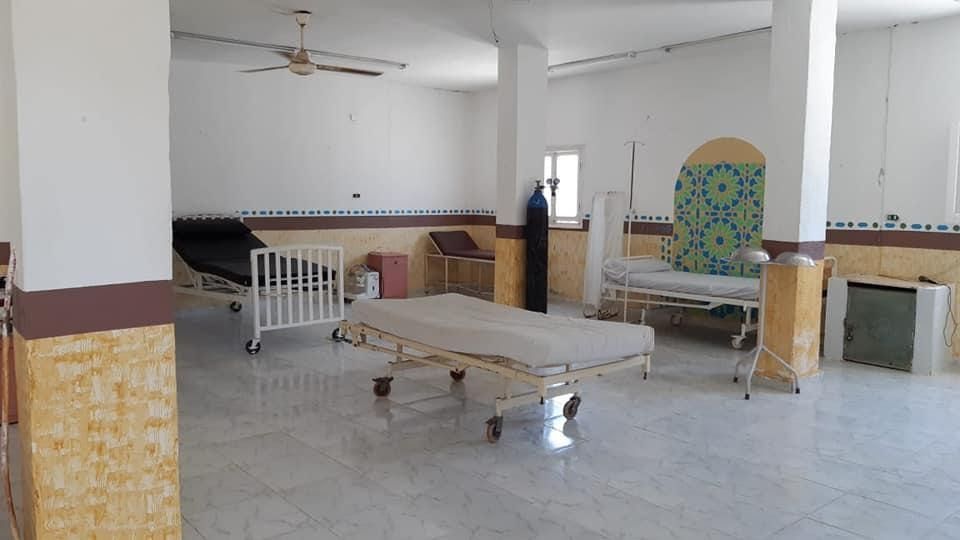 Far from coronavirus: Campaigns to demolish homes of the displaced in Ismailia for a third time

Despite the fears around COVID-19, some activity continues as normal, most notably the demolition of so-called illegal buildings. Earlier this month, police forces and the city council launched a campaign targeting the homes of North Sinai’s displaced citizens located in the Kilo 7 area in Ismailia. They demolished many homes owned by displaced citizens and arrested several people. The intervention of tribal sheikhs who enjoy strong relations with security agencies secured their release shortly after they were arrested.

Two of the displaced men who were arrested live in the New Saleheya area. They told Mada Masr that some of North Sinai’s displaced citizens who take refuge in these settlement areas buy the land, while others who do not have enough money build shacks or simple houses without foundation work in their vicinity. The two men noted that lands the state says are for agricultural cultivation are in fact barren, as high levels of salinity make them unfit for farming.

The two men denounced the government’s actions toward the displaced locals. The raging security situation in North Sinai drove most of them to flee their homes and farms without any other shelter or compensation for what they left behind.

At the end of August 2016, the North Sinai governorate published statistics with estimates of 21,861 citizens from Rafah and Sheikh Zuwayed were displaced because of the war against armed groups. More recent statistics, which Mada Masr viewed, noted that 10,468 families were displaced by the end of 2018.

Topics
Related
North Sinai
Coronavirus in North Sinai
Several factors have residents concerned about the area's capacity to deal with the outbreak
Province of Sinai
Militants launch attacks on North Sinai tribes following renewed call to mobilize alongside Armed Forces
An elder of the Tarabin tribe — one of North Sinai’s largest tribes — was brutally executed.
Coronavirus
A double curfew and a brush with the coronavirus: No COVID-19 cases recorded in North Sinai
Coronavirus passes through North Sinai, but no cases reported
Coronavirus
From the COVID-19 operations room: How has the Health Ministry handled the ‘war’?
Hossam Bahgat | Everything changed on March 6, the day the health minister returned to Egypt.