UPDATE: Italy backtracks from sale of warships to Egypt amid backlash over Regeni case
By
Mada Masr 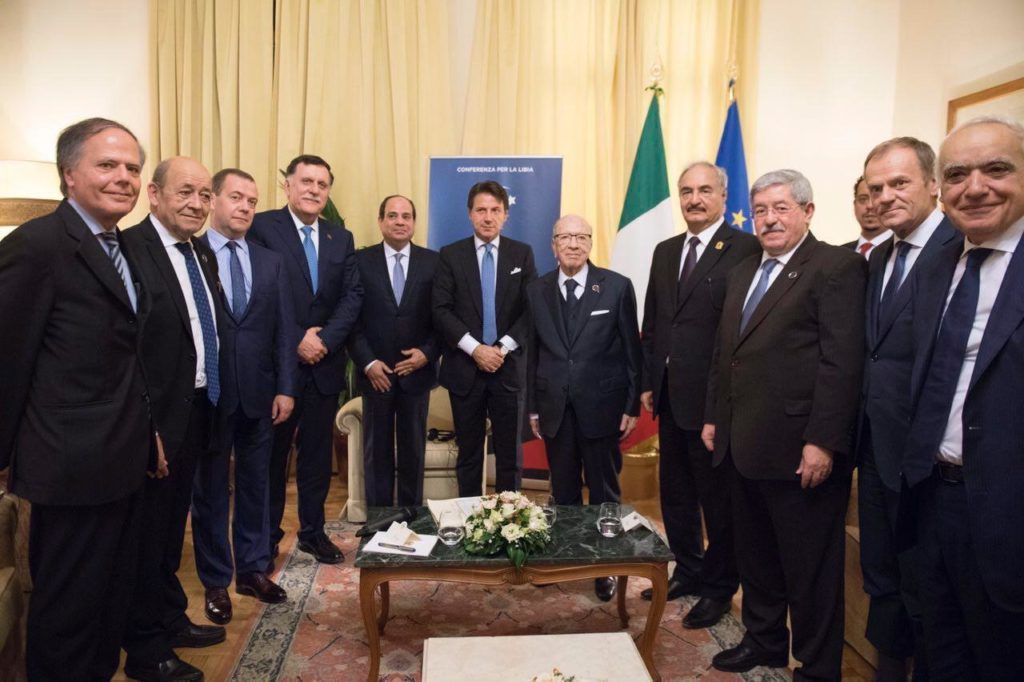 Sisi, Sarraj, Haftar and Conte in a meeting in Palermo, Italy in 2018

The Italian government appears to have backtracked from finalizing the sale of two Fremm frigates, worth an estimated 1.2 billion euros, to Egypt, according to Italian news agency ANSA.

The frigates are part of a much larger arms deal between Egypt and Italy that is still in the works and is estimated to be valued between 9 and 10 billion euros, which would make it the largest military acquisition in Egyptian history.

News of the frigate sale came one day after a phone call between Italian Prime Minister Giuseppe Conte and Egyptian President Abdel Fattah al-Sisi on Sunday.  The news prompted a backlash in Italy over the lack of progress in the investigation into the murder of Italian doctoral student Giulio Regeni in Cairo in 2016. The parliamentary commission of inquiry into Regeni’s death “urgently” summoned Italian prime minister Giuseppe Conte. Regeni’s parents also condemned the deal saying they feel betrayed by the sale of the warships to Cairo.

On Wednesday, Italian Foreign Minister Luigi Di Maio told a parliamentary hearing that talks on the frigate sale were still ongoing and had not yet been finalized.

“Our incessant request for significant progress in the investigation into the case of the barbaric murder of Giulio Regeni remains firm,” Di Maio said. “The Italian government and institutions are continuing to demand the truth from the Egyptian authorities via real, substantive and effective cooperation.”

Italian prosecutors have been investigating Regeni’s killing in coordination with Egyptian officials, but after more than four years, no one has been charged.

Di Maio added: “Our efforts will continue to facilitate setting up a meeting in person between the prosecutors of Rome and Cairo,” according to La Repubblica.

The foreign minister also addressed the case of Patrick George Zaki, the Egyptian student who was pursuing a master’s degree at the University of Bologna and was arrested at Cairo airport in February as he was returning to Egypt to visit his family. He was subsequently held incommunicado for 24 hours by National Security Agency officers, during which time he was beaten and electrocuted before appearing before the public prosecutor in his hometown of Mansoura. Zaki is being held in remand detention on a range of charges that include incitement to protest, calling for the overthrow of the state, managing a social media account that aims to undermine social order and public safety, and incitement to commit violence and terrorist crimes.

“Concern remains high for [Zaki] too,” Di Maio said. “Our embassy in Cairo continues to monitor the evolution of the hearings. Italy will continue to follow the case.”

The 9 to 10 billion-euro mega-deal, which was first reported in the Italian press in early February, includes six frigates, 24 Eurofighter Typhoon fighter jets, 24 M-346 jet trainer aircraft and a surveillance satellite.

Conte submitted the deal for the Italian government’s consideration at a Cabinet meeting on May 28, according to La Repubblica. However, Conte was forced to table the deal following opposition from three political parties that form part of Conte’s coalition government. The opposition was reportedly due to the fact that judicial coordination with Egypt on Regeni’s case “hadn’t amounted to anything.”

A source from the Italian Foreign Ministry told La Repubblica that a decision on the arms deal “must be a joint decision that takes into consideration the general interests of the country and respects the demands of the Regeni family.”

This past December, an Italian parliamentary commission that was set up to review the case held its first session in Rome. Lead Italian prosecutor Sergio Colaiocco told the commission that Egyptian officials deliberately tried to mislead the investigation on at least four occasions.

In mid-January, Egypt’s public prosecutor Hamada al-Sawy announced that a new investigative team had been formed to look into the case. Sawy did not state why the new team had been formed, but an Egyptian official told Mada Masr at the time that the move allows Egypt to further procrastinate while appearing to make progress on the issue.

The official also said Italy may use the political pressure it faces over Regeni’s case as further leverage to secure more deals with Egypt, adding that there may be “some mega-economic deal to accommodate the Italian government.”