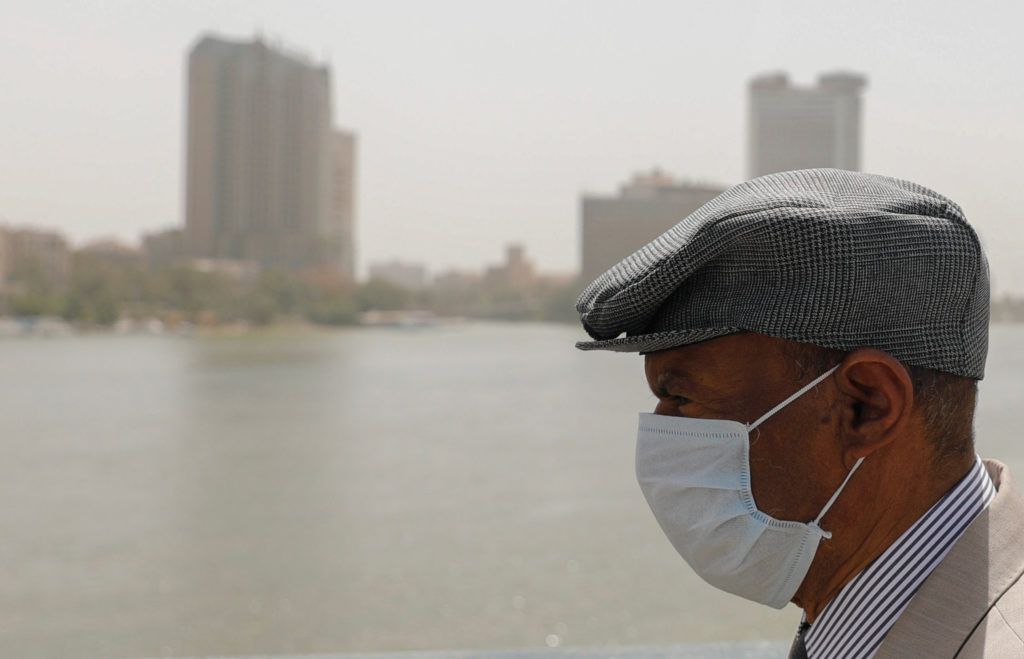 An older man, wearing a protective mask amid concerns over the coronavirus disease (COVID-19), walks on the Qasr el-Nil Bridge across the Nile river in Egyptian capital Cairo, Egypt March 31, 2020. REUTERS/Amr Abdallah Dalsh

Fifty-two medical workers and staff at Abbaseya Chest Hospital have contracted the coronavirus, along with a number of their family members, and are all being quarantined in the hospital, according to medical sources. The medical staff are demanding that the hospital stop receiving new COVID-19 patients until a backup medical team can come in to cover the staff shortage.

According to the sources, who spoke to Mada Masr on condition of anonymity, the director of Abbaseya Chest Hospital claimed he had repeatedly called on the Health Ministry to send in a backup medical team but received no response. The sources said the director nevertheless insisted on keeping the hospital operational, which the sources said endangered the lives of health workers and patients. Mada Masr attempted to contact the hospital director, Mohamed Eid, but received no response.

More than 70 PCR tests were administered to hospital staff over the past several days after many began exhibiting symptoms, according to the sources. Ten doctors, 35 nursing staff and seven janitors all tested positive. The positive staff and family members, including children aged between three and five years old, are currently crammed inside the ICU and specialized wards.

More than two-thirds of the medical team at Abbaseya Chest Hospital are currently unable to work after contracting the virus, but the hospital still receives hundreds of patients a day, the sources said. There are currently 23 patients in the ICU ward being treated by only three nurses in each of the morning and night shifts, far lower than the recommended number of nine nurses per shift. Additionally, only one nurse per shift is on call at the hospital’s reception.

“Every 30 minutes, a patient dies in front of our eyes before we even take a swab, and we can’t do anything for them,” one of the sources said.

Meanwhile, the head of the Doctors Syndicate, Hussein Khairy, met with Health Minister Hala Zayed to address challenges faced by medical workers amid the pandemic. Zayed said in a press release on Sunday that steps have been taken to develop a hazard pay fund for medical workers in coordination with the Cabinet and the Finance Ministry, and that the medical professionals’ allowance has been raised to 75 percent. She also said that the ministry is currently considering raising the retirement age to 62.

Zayed claimed the ministry performs PCR tests for working medics who exhibit COVID-19 symptoms. The minister said that over 10,000 PCR tests have been performed on medical workers since the onset of the pandemic in Egypt and that each quarantine hospital has 20 beds dedicated to healthcare workers who contract the virus.

The Doctors Syndicate issued its own statement saying that Khairy reiterated all previous demands made by the syndicate for the ministry to protect medical workers. The statement also said a direct communications channel between the syndicate and the health minister had been established to address problems faced by medical workers more rapidly.

The meeting came amid simmering tensions between the Health Ministry and the Doctors Syndicate that came to a head last week following the case of a 32-year-old doctor who died waiting for a PCR test and a hospital bed. The incident prompted the Doctors Syndicate to blast the Health Ministry for delays in moving the doctor to a quarantine hospital and to threaten to take “all necessary legal action to go after all those involved in the negligence” related to his death. The syndicate also blasted the ministry’s overall handling of doctors’ work, depicting the doctor’s death as just one of many cases of negligence.

Prior to his meeting with Zayed on Sunday, Khairy and several syndicate board members met with Prime Minister Mostafa Madbuly last week to address recurring problems faced by medical workers, particularly shortages in medical supplies and infection control equipment in some hospitals. They also demanded that a central hospital in each governorate or a regional hospital in each of the seven regions of the country be designated for quarantine doctors who contract the coronavirus.

Demands also included that all medical workers who come in contact with COVID-19 patients get PCR testing and be allowed to isolate at home or at the healthcare facility where they work until their results come back, with a second swab to be taken within 48 hours if they exhibit any symptoms.

Separately, Madbuly convened a meeting on Saturday with the government medical task force to address the rising number of cases in Egypt. The task force includes the ministers of health, higher education, interior and information; the advisor to the president on health affairs and prevention; the chairman of the Egyptian Agency for Medical Standard Procurement, Provision and Supply; and other senior officials, according to a Cabinet statement.

The primary outcomes of the meeting included:

The Health Ministry also provided new data on the number of cases and treatment units, including:

The statement also disclosed, for the first time, the contribution of university hospitals in the government’s handling of the pandemic.

He further specified that the student housing facilities currently in use as quarantine hospitals are the Alexandria University student housing and the Abo Qir Youth City under the supervision of a medical team from Alexandria University, as well as the Mansoura, Tanta, Helwan, Assiut, Kafr al-Sheikh, Beni Soueif, Banha, South Valley and Monufiya university housing complexes — totaling 3,491 beds altogether.

Topics
Related
Daily COVID-19 roundup
Daily COVID-19 roundup: June 2
The true number of total infections could be five times official figure, says minister.
Coronavirus
What protective measures can you think of so we don’t go back to the pre-crisis production model?
Bruno Latour | If everything has stopped, and all cards can be put on the table
Coronavirus
Here’s how the government wants us to coexist with COVID-19
Rana Mamdouh | The government made an about-face in strategy on April 23.
Coronavirus
After spike in infections among medical staff, doctors halt work at recently designated quarantine site until demands met
"Swabs are only for those who’ll work. If you’re not going to work, go home."