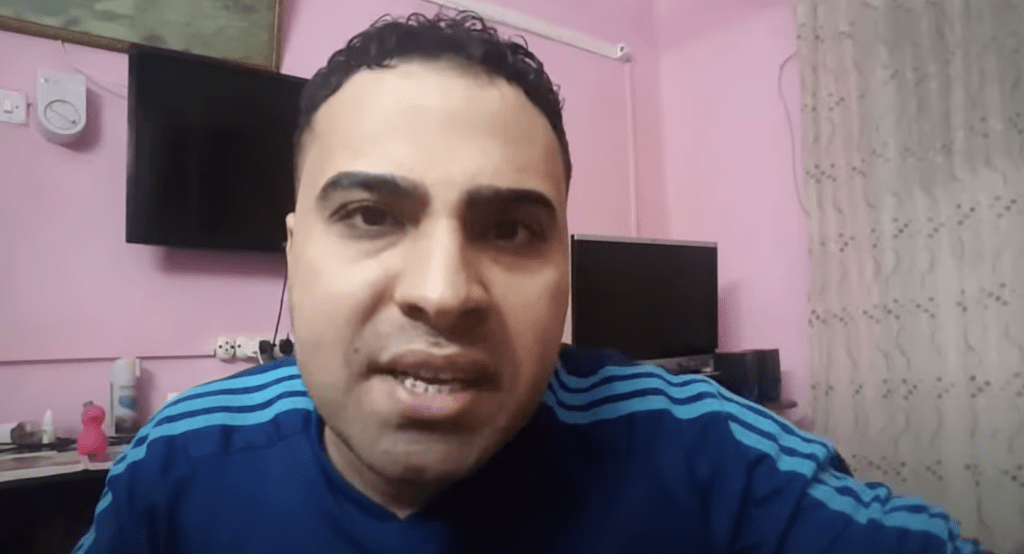 A popular YouTuber known as “Super Maher” is the latest social media personality to be arrested on charges related to inciting debauchery or immorality using the internet.

Maher, who has more than 350,000 subscribers to his YouTube channel, was arrested from his home in the Cairo neighborhood of Sherbeen yesterday, according to news reports. He is the first well-known man to be arrested in what appears to be a sweep targeting social media users. Four female social media personalities, including a teenager who was arrested after she spoke out about being raped, have been taken into custody within the last two months on public morality charges.

Menna Abdel Aziz, a 17 year old who vlogs on TikTok and YouTube, was arrested a few days after she appeared in a May 22nd video with her face visibly bruised and swollen. In the video, she described being raped by a man she knows, and then being beaten and threatened against speaking about it by him and others who assisted him, all of whom she named. In response, the man she accused of rape and several other people who claimed to have been present during the incident published their own videos saying the sex was consensual, accusing Abdel Aziz of lying and promiscuity, and threatening her with more violence. Abdel Aziz later appeared in new videos, including one alongside the man she accused of rape, retracting her accusations and asking people to forget what she had said previously.

According to the Egyptian Initiative for Personal Rights, prosecutors questioned Abdel Aziz as a survivor/victim of rape and battery in the presence of her lawyers into the early hours of the morning of Saturday, May 30. Later that morning, however, while still in custody, Abdel Aziz was interrogated as a suspect without lawyers present on charges of inciting public debauchery and fraudulent use of an internet account. Prosecutors ordered her detained on Sunday for 15 days on remand. The man accused of raping her has also been arrested, along with five other people accused of involvement in the incident.

“Interrogating Abdel Aziz and confronting her with charges in the absence of her lawyers is a grave breach of her right to defense,” EIPR, whose lawyers are representing Abdel Aziz, said in its statement on Sunday. “Moreover, the prosecution has put her in the position of a defendant who is intimidated by the interrogation and afraid of its consequences, rather than treating her as a young victim/survivor who needs as much reassurance as possible in order to participate in the investigation.”

A few weeks earlier, on May 14, police arrested vlogger Mawada el-Adham and charged her with inciting debauchery and using social media to publish pornography. Police raided her house a day later and said they found thousands of US dollars in cash as well as electronic devices, which they seized as evidence against her. Two weeks before that, Haneen Hossam, a TikTok celebrity, was arrested after other social media users and television hosts, including Nashaat al-Dahy, accused her of encouraging young women to pursue online sex work and asked the government to intervene. In addition to charges of inciting debauchery and undermining social values, she faces charges of human trafficking. Bellydancer Sama al Masry was arrested on April 24 and also faces charges of inciting debauchery.

In early May, the public prosecutor’s office published part of a statement on Facebook likening the internet to a national border that needs to be policed and protected, because it “allows for evil forces to corrupt society.”

Topics
Related
debauchery charges
Up in arms over a TikTok star: Public morality and the state
Ghadeer Ahmed | Earlier this month, the internet exploded with criticism of Haneen Hossam, a twentysomething with more
monopolization
The fight for the internet (1)
Odra | We need to find a way out of this.
censorship
Beating the block: Mada Masr launches Tor mirror
Mohamed Tita | This cat and mouse game has been going on for too long now.
cybercrime law
How you will be affected by the new cybercrime law: A guide
How the law affects users, providers, web administrators, government employees and digital experts