March and April brought back memories of bleaker days for the Egyptian economy.

In a May 7 statement, the Central Bank of Egypt announced that foreign currency reserves dipped by about US$3 billion in April, bringing the total drop to about $8 billion — nearly a fifth of the $45.5 billion in holdings recorded in February — before the COVID-19 pandemic ravaged global markets.

The Egyptian pound, meanwhile, has remained largely stable at LE15.70 to the dollar — fueling concerns about a repeat of the crippling currency shortages of 2011 and 2015–2016.

Egypt has moved to shore up its currency reserves to stave off such a currency crisis by bringing in $2.8 billion under the International Monetary Fund’s emergency Rapid Financing Instrument, with a potential $9 billion coming from the IMF and other sources down the line.

Nonetheless, the dip in currency reserves remains. To understand the reasons behind the drop and its possible ramifications, Mada Masr spoke to economists and former government officials.

Egypt uses these holdings to ensure a healthy balance of payments, the summation of all international transactions a country has with other countries. Foreign reserves are crucial in making foreign debt payments, paying for commodity imports and ensuring a backstop in the event of an economic crisis.

How are reserves measured?

Other than their absolute dollar value, foreign reserves are often examined relative to the country’s imports: how many months of imports can reserves cover should all other foreign currency resources — such as tourism revenues and exports — grind to a halt?

The current reserves should cover about seven months of imports, as Egypt bought foreign commodities at a monthly average of $5.5 billion in the first half of the current fiscal year, which spanned from July to December 2019. The global average is 10.8 months, according to World Bank data. 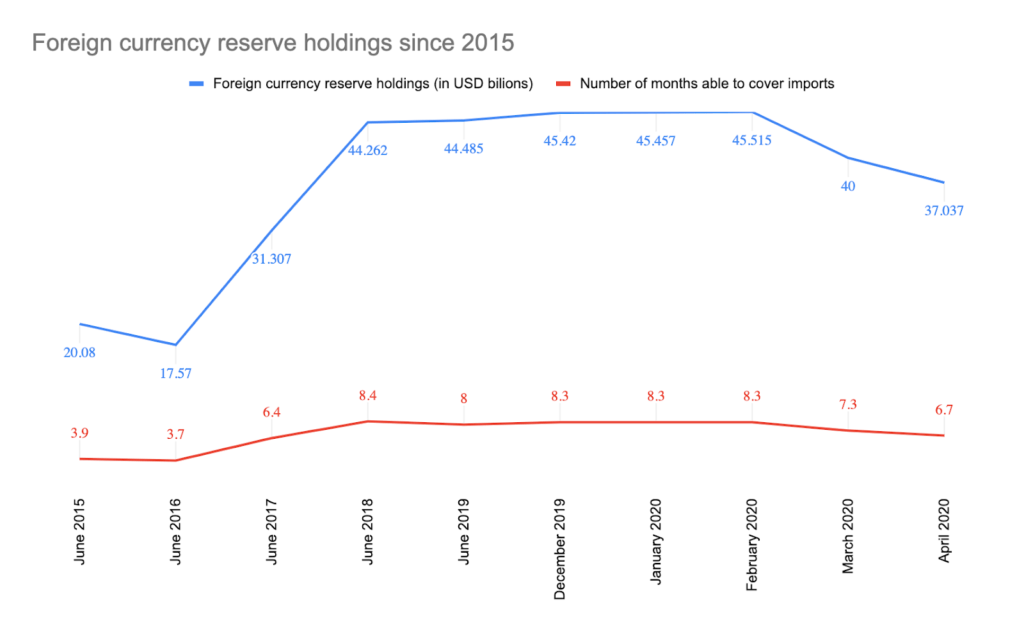 Despite the drop, Egypt’s reserves still exceed the “rule of thumb” of a three-month threshold that the IMF sees as providing a traditional “level of comfort,” according to the fund’s Debt-and Reserve-Related Indicators of External Vulnerability.

The central bank provided three reasons for the dip in April: $3.1 billion were used to fund imports of strategic goods; $1.6 billion to repay foreign debt, including $1 billion in bonds; and covering repatriation flows for foreign investment in local debt securities through its legacy mechanism, though the bank did not specify the amount repatriated. The cumulative losses presented by the bank are larger than the reported $3 billion, however, and it is not clear how the central bank was able to close some of the gap.

Shoring up the pound

Covering funds needed for “strategic goods” implies intervening to support the exchange rate, according to Alia El-Mahdy, the former dean of the faculty of economics and political science in Cairo University, and Samer Atallah, an economics professor at the American University in Cairo.

The central bank’s normal role is to avail hard currency just for the government, but if it does the same for the private sector then that would be considered currency intervention, Mahdy says.

Hassan, the former central bank governor, explains that “strategic goods” usually include food, medicine and government imports. Yet, “there isn’t a specific law that defines what strategic goods are,” he said.

The pound witnessed an upward streak in the fourteen months through February 2020, gaining 13 percent against the dollar since January 2019, according to Bloomberg data.

The adequacy of reserves could also be measured by the percentage of short-term liabilities compared to total external debt — the lower the better and vice versa, according to the IMF.

The below chart shows an improvement in that metric since Fiscal Year 2015/16, as the government reduced its reliance on short-term borrowing in foreign currency to 25.5 percent of total external debt at the close of September, compared to 40 percent three years earlier. 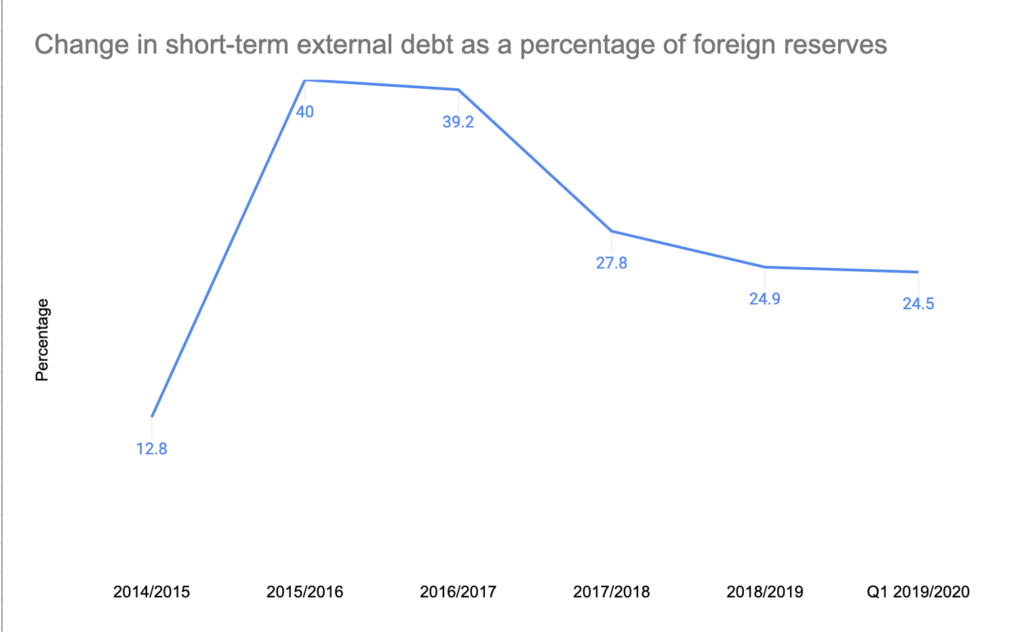 That was the case despite a 16 percent year-over-year increase in total external debt in the second quarter of 2019/20 to US$112.6 billion. Short-term debt, which needs to be repaid in a year or less, directly impacts foreign reserves because it reflects commitments the central bank needs to cover using its foreign reserves.

Following the 2016 devaluation, the central bank employed a special mechanism to attract foreign investment to Egypt’s local debt market. Under this mechanism, investors purchased Egyptian pounds from the central bank directly rather than from banks, which is normal practice, to invest them in Egyptian debt instruments, under the condition that if the investors chose to leave the market, their investment would be repatriated in dollars.

The mechanism was scrapped in 2018 and investors had to source their currency needs from the exchange market. However, those that invested in Egyptian debt in the 2016-2018 window are still entitled to repatriate their investments in dollars.

AD
You Might Have Missed
Mugamma revisited: Reimagining the building and the square
Where do old lesbians go to die?
Carbon Colonies & A Green New Deal
What we talk about when we talk about trees
AD
Beesan Kassab
43 articles on Mada

Topics
Related
Coronavirus
After spike in infections among medical staff, doctors halt work at recently designated quarantine site until demands met
"Swabs are only for those who’ll work. If you’re not going to work, go home."
textile industry
Ghazl al-Mahalla: Beleaguered public company steps up to help combat pandemic
Omaima Ismail | The company's move will eventually increase domestic face mask production by nearly 30 percent
Coronavirus
Distraction and narcissism in confinement: Q&A with Stephen Frosh
Salah El Oweidy | "That’s the danger of all this material, I think we need more time alone with our thoughts."
IMF
Egypt, corona and the IMF: What do we know about the new loan?
Beesan Kassab | The IMF plans to hold a meeting on May 11 to consider the Egyptian government's request