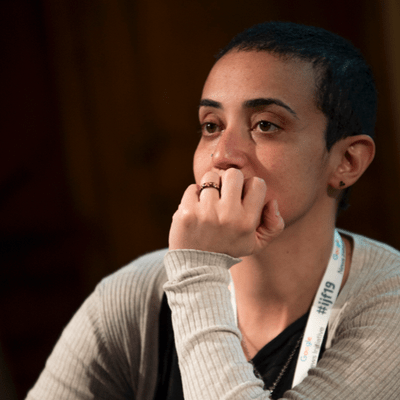 Lina Attalah, the co-founder and editor-in-chief of Mada Masr, was detained on Sunday afternoon outside the Tora Prison complex where she was conducting an interview with Laila Soueif, the mother of imprisoned activist Alaa Abd El Fattah.

At around 12 pm, security officials confiscated Attalah’s phone and arrested her shortly afterward. She was transferred to the Maadi police station, where she is currently being held. Authorities have refused to allow Mada Masr’s lawyer to see Attalah and to inform him of the reason for her arrest. On Sunday evening, Lina Attalah was taken to the Maadi prosecutor’s office for questioning, the lawyer said. She was released from the Maadi police station on Sunday night.

Attalah is a world-renowned, award-winning journalist who has been working as a reporter for more than 15 years. She was outside the maximum-security prison complex today following the story of Laila Soueif, who was making her 22nd attempt to deliver cleaning and medical supplies to her son, Abd El Fattah. Abd El Fattah has spent 35 days on hunger strike after lawyer visits and court sessions were suspended due to coronavirus restrictions.

Since 2015, Egypt has regularly featured among the world’s top jailers of journalists.

Access to the Mada Masr website, which Attalah co-founded in 2013, has been blocked in Egypt since May 2017, one of over 500 websites currently unavailable on ISPs in the country.

In November 2019, Mada Masr editor Shady Zalat was arrested from his home, and security forces raided the website’s offices the following day. Mada Masr staff were held for several hours, before three senior Mada editors and reporters were arrested, including Attalah. The raid and arrests gathered a significant amount of local and international attention, and those arrested were released.

This article was updated to reflect that Attalah was released on Sunday night.