As the coronavirus spread across the globe earlier this year, skyrocketing demand for face masks had already depleted Egypt’s inventory by February, causing prices to shoot up by some 500 percent.

On April 6, the public sector Misr Spinning and Weaving Company (MSWC, known colloquially as Ghazl al-Mahalla) announced that it had repurposed one of its production lines to make surgical face masks in response to a severe shortage in the country.

MSWC was not the first storied public sector company to return to the fore amid the pandemic. In the weeks prior, perfume maker Kesma and Chabrawichi saw a renewed surge in demand for its Cologne 555 which is made with 70 percent alcohol and became an affordable disinfectant of choice for many.

Yet MSWC’s entry into the medical supply market was a wholly proactive one. Workers toiled over one of the factory’s worn-out production lines, repurposing and upgrading it to eventually increase domestic production of face masks by nearly 30 percent.

According to Hamdi el-Sisi, a technician at MSWC, the idea was first suggested by Osama Atef, a company chemist and the head of its medical cotton department. He proposed reconfiguring the factor’s existing machines to produce face masks. “Five technicians started working on the plan,” Sisi told Mada Masr. “Currently, we produce 60 facemasks per minute, 3,600 per hour, which is approximately 1.5 million per month. This is achieved over two eight-hour shifts per day, across 26 business days per month.” At this rate, the company is able to produce approximately 18 million face masks annually.

Prior to MSWC’s entry into the market, Egypt’s annual surgical face mask production hovered around 60 million, according to the Cabinet and the Federation of Egyptian Chambers of Commerce. MSWC’s contribution boosted that figure by nearly 30 percent.

MSWC’s surgical face masks are not made available to merchants, Sisi says. Rather, they are supplied to the Health Ministry’s preventive medicine division, civil society organizations, security directorates, police stations, and other government entities. They are also supplied to large corporations that distribute them to their employees for protection, such as Orascom and Arab Contractors. The government has priced the company’s product at LE2 per mask, Sisi says.

There are a total of ten production lines for surgical masks in Egypt, according to Mohamed Ismail Abdo, head of the General Division of Medical Supplies at the Cairo Chamber of Commerce. All ten lines were added to existing medical supply factories during the avian flu outbreak in 2006 and the swine flu outbreak in 2009.

Prior to the coronavirus pandemic, Egypt imported approximately 180 million face masks annually from China to help cover domestic demand, which ranged between 230 and 240 million a year. Abdo attributes this reliance on imports to the cheaper cost. A locally produced face mask costs roughly 12 piasters while an imported one costs just 9 piasters. Medical supply companies opted for imported masks resulting in little incentive to boost domestic production.

“The company is playing a heroic role,” Sisi says of MSWC. Labor has been divided between its 14,000-strong workforce in a way that mitigates the spread of the coronavirus while avoiding a drop in production, particularly given that the company exports various textile products to some 37 Arab and European countries.

The company secured export contracts worth US$2.5 million in January and was planning to export a total of US$60 million worth by the end of the year. Despite the pandemic forcing many countries to all but halt external trade, MSWC appears to be determined to meet its target.

The company recently announced that it would shift its focus to African markets, Hesham Abo Shameyya, the director-general of exports at MSWC, said in a press statement. According to Abo Shameyya, 80 percent of the company’s exports to European markets have been blocked due to border closures, prompting African markets to emerge as an alternative.

But the coronavirus pandemic is only the latest episode in the tumultuous saga of Ghazl al-Mahalla since the company’s founding nearly a century ago. 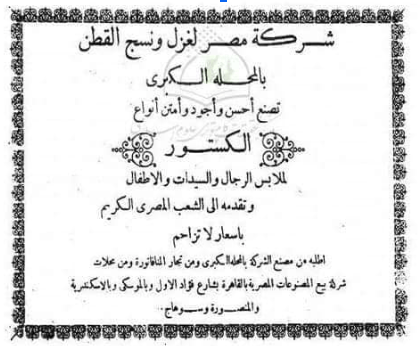 In his 1987 book Al-Rehla (“The Journey”), trade unionist Fekry al-Khouly recounts the launch of MSWC:

“One day in early 1928, I was at school as usual. The town elders came by and asked us to go to the mayor’s plantation. There, I saw my mother, my sisters, and a host of women, men and children from the village. The mayor asked us to take a seat. An effendi stood beside the mayor and declared loudly, ‘People of Kafr el-Hama, we’ve come here to talk to you. Bank Misr has established a factory to spin the cotton you grow and make it into clothes for you to wear. In the old days, we grew cotton for the English. Now, we will spin the cotton we grow into textiles. We’ll grow it, spin it and weave it ourselves, so that all of it will be made in Egypt, nationally produced. Send your sons to learn [this] craft. They’ll earn a decent living once they have.’”

The company was established by Talaat Harb Pasha in 1927 with LE300,000 in capital from Banque Misr, the first fully Egyptian-owned bank. By 1958, it had increased to reach approximately LE4 million. Now, it is estimated at LE1.5 billion (the Egyptian pound was devalued several times, most recently in 2016 when it lost approximately half its value).

MSWC products occupy a certain place in cultural memory. Many of our fathers and grandfathers used to wear MSWC suits and shirts. Its flannel fabrics were among the commodities one could purchase on a government subsidy card. It was arguably the most popular fabric in the 1960s and 70s and was a staple of loungewear, donned by rich and poor alike. 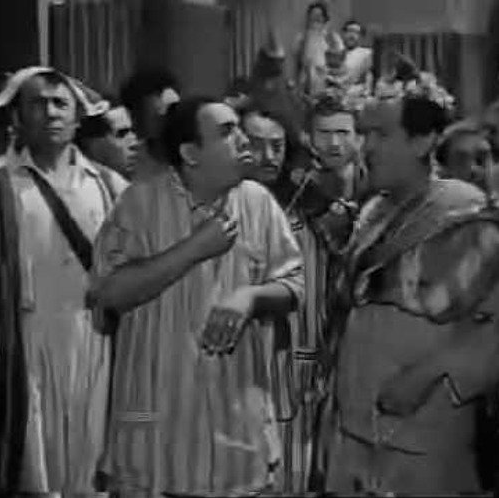 A still from the 1950 film, The Millionaire

The shrinking number of workers is a reflection of the company’s decline over the past 30 years. The 1990s brought about radical changes to the public sector, and particularly to the spinning and weaving industry, which precipitated the company’s fall from grace.

An especially detrimental blow was dealt to MSWC by Law 203 of 1991, which re-designated public sector companies as business sector enterprises. It also turned national industry companies into mere subsidiaries of a holding company, with members of the private sector sitting on the holding company’s board. The current board of directors of the Holding Company for Spinning and Weaving includes Marie Louis Bishara, who owns a number of textile and garment production lines, including those for the BTM and Marie Louis brands. 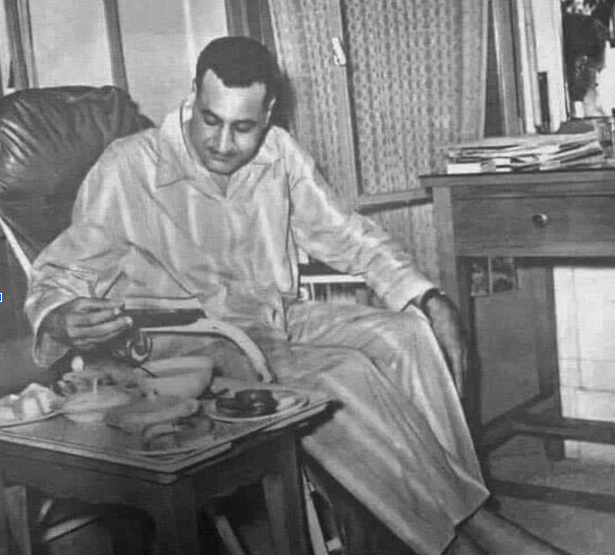 Cotton was fully liberalized in a 1994 decree, leading to a five-fold increase in cotton prices and a sharp rise in production costs for textile manufacturers. MSWC lost LE400 million in a single year. The private sector grew, as did imports, which undercut local manufacturers.

“During the 1990s, interest in the company began to wane,” Sisi says. “It was intentionally made to incur losses for the benefit of the private sector and duty-free zones. It was neglected by one administration after another, who all refused to upgrade the machinery or take any protective measures. Until recently, there were lines that worked with the same machines from 1955 without any upgrades.”

Farag Awwadh, a former general commissioner at the company, acknowledged as much when he told the press in 2018 that the factory had not been upgraded or refurbished since the early 1990s. The fashion line, which formerly made suits and shirts, was shut down and repurposed to make jacquards and furniture textiles instead.

A factory worker, who spoke to Mada Masr on condition of anonymity, said the government’s decision to withhold investment in the domestic textile industry as a whole was evident in a number of aspects. As an example, he described how some machines would remain out of order for weeks on end because they lacked a small, easily obtainable replacement part.

Most public sector companies were also exploited politically, the worker says. In the run-up to parliamentary elections, candidates from the ruling National Democratic Party at the time would order mass hirings, adding a burden of unnecessary wages to the company’s budget. The worker also points out that the company’s sales were affected by the decline of domestic marketing efforts and retail outlets. In the past, the Egyptian Industrial Sales Company, Benzion, Omar Effendi and other state-owned trading companies all provided MSWC products with proper marketing services. As such outlets were privatized or rented out, MSWC lost a chunk of its market share, which further contributed to its decline.

Between 2007 and 2011, MSWC posted losses of LE600 million, according to the Central Auditing Authority, which came despite having LE952 million in debt forgiven in 2007.

Worker conditions in the 2000s deteriorated along with company performance, prompting a series of strikes in 2006, 2007, and — most notably — on April 6, 2008, which was violently thwarted by security forces. This event also gave rise to the April 6 Youth Movement that emerged as a leading grassroots movement in the build-up to the January 25, 2011 revolution.

Eight years after the mass uprising in which organized labor played a key role, Egyptian authorities began embarking in 2019 on a new vision for the entire textile industry in a bid to curb losses and boost productivity by restructuring every company operating in the sector. The government’s plan is to gradually merge nine ginning, trading and pressing companies into one corporation, as well as to merge 22 spinning, weaving and dyeing companies into nine major corporations.

According to Public Enterprise Minister Hisham Tawfiq, the development plan includes the establishment of a central marketing and export unit within the Holding Company for Spinning and Weaving that would oversee all marketing for its subsidiaries, examine ways to automate systems of operation, and study options for expansion into new products and markets both domestically and abroad. According to the chairman of the holding company, the development plan will be rolled out over a span of two and a half years.

With regard to MSWC in particular, a development scheme was devised by Warner Consulting Group, according to the company chairman, Ashraf Ezzat. The plan includes upgrading six spinning lines, establishing a new factory with a daily spinning capacity of 200 tons of cotton (making it the largest in the Middle East), and upgrading 800 weaving machines to produce 130,000 meters per day of 100 percent Egyptian cotton bedding fabric slated for international export. The company will eventually merge with Al-Nasr Textile to form a new corporation: New Misr el-Mahalla.

Various aspects of the new development plan are already underway, according to Sisi, the MSWC technician. Several training workshops were organized in January and February to familiarize workers with the new incoming equipment, which they hope will help restore MSWC to its former glory.

AD
You Might Have Missed
Carbon Colonies & A Green New Deal
Mugamma revisited: Reimagining the building and the square
What we talk about when we talk about trees
Where do old lesbians go to die?
AD
Omaima Ismail
8 articles on Mada

Topics
Related
Daily COVID-19 roundup
Daily COVID-19 roundup: May 14
Doctors Syndicate asks the president to intervene against "dangerous" new infection control measures
Coronavirus
Video | All in a day’s work
Mostafa Mostafa Mohamed | Mada Masr takes to the streets of Alexandria accompanying a tram driver, bakery worker and a laborer
Coronavirus
Paramedics on the frontline
Mohamed Ashraf Abu Emaira | The hours are grueling, and they often go with little sleep on long drives to and from hospitals.
Coronavirus
Cologne 555: How coronavirus revived Egypt’s favorite perfume
Omaima Ismail | Production had been "modest" in recent years