اقرأها بالعربية
Egypt, corona and the IMF: What do we know about the new loan?

Egypt’s government has asked the International Monetary Fund (IMF) for a new loan to support the economy in the wake of the coronavirus pandemic.

The request, however, raises wider questions about the health of Egypt’s external position and the nature of the technical support the IMF can offer.

Egypt is seeking financing under the IMF’s Rapid Financing Instrument and its Stand-By Arrangement, the latter being the same funding mechanism several Egyptian governments unsuccessfully sought to secure in the period between 2011 and mid-2013.

Both programs are designed for countries facing urgent or anticipated difficulties in their balance of payments. The government, however, did not disclose how much money it is seeking.

Ahmed Moussa, a talk show host whose messages often align with the state’s, said the loan would exceed US$7 billion, while the privately-owned Al-Shorouk newspaper quoted an unnamed government official expecting the loan to edge above $3 billion. While a source at the Central Bank of Egypt told Masrawy yesterday that Egypt will receive a first payment of $2.7 billion on May 11, Reuters has reported that the IMF plans to hold a meeting on May 11 to consider the Egyptian government’s request.

It’s only been a few months since Egypt successfully concluded a $12 billion program with the IMF. Signed in November 2016, the agreement came under the IMF’s Extended Fund Facility mechanism, which targets economies facing structural impediments, slow growth and systemically weak balance-of-payments positions.

The loan deal, which both Egyptian and IMF officials have hailed as a success story, marshaled forth an economic overhaul that included devaluing the currency by 50 percent and scrapping burdensome energy subsidies. Inflation surged as a result, slashing the real incomes and savings of millions of Egyptians, and there have been concerns about the stifled growth of the non-petroleum private sector.

But questions about the timing and the extent to which Egypt can continue to take on debt remain in light of the government’s new requests from the international lender.

The government mainly needs the loan to protect against potential shocks that could prevent it from getting international financing in the future, says Noaman Khaled, an economist at CI Capital Holding. That’s especially pertinent given the impact coronavirus has had on international debt markets.

The funds would also provide breathing room for the central bank if it decides to intervene and support the Egyptian pound, Khaled says.

The pound could depreciate by 7 or 8 percent by the end of the year to reach LE17.2 to the dollar, CI Capital wrote in a report last month. The Cairo-based investment house estimates that defending the pound’s value will cost about $580 million of reserves for every 1 percent.

That translates into US$4.64 billion to stop the pound from depreciating 8 percent against the US dollar, according to CI Capital’s estimates in the report.

A new IMF deal would enable the government to raise debt in international markets at relatively cheap prices, Khaled says. Improving Egypt’s standing as a borrower could be one of the reasons authorities are seeking the IMF loan, he adds.

“Getting an IMF loan is generally viewed as a vote of confidence in the economy’s ability to repay debtors, because of the measures the IMF usually requires before granting funds,” Khaled says. “This translates into debt with good interest rates and generally reasonable terms.”

The chart below shows the growth of Egypt’s external debt over the past nine years. The 2016 spike reflects the loans Egypt secured from regional backers in order to qualify for the IMF’s facility. In 2017, its external debt jumped to 42 percent as the IMF disbursed several tranches of the loan. 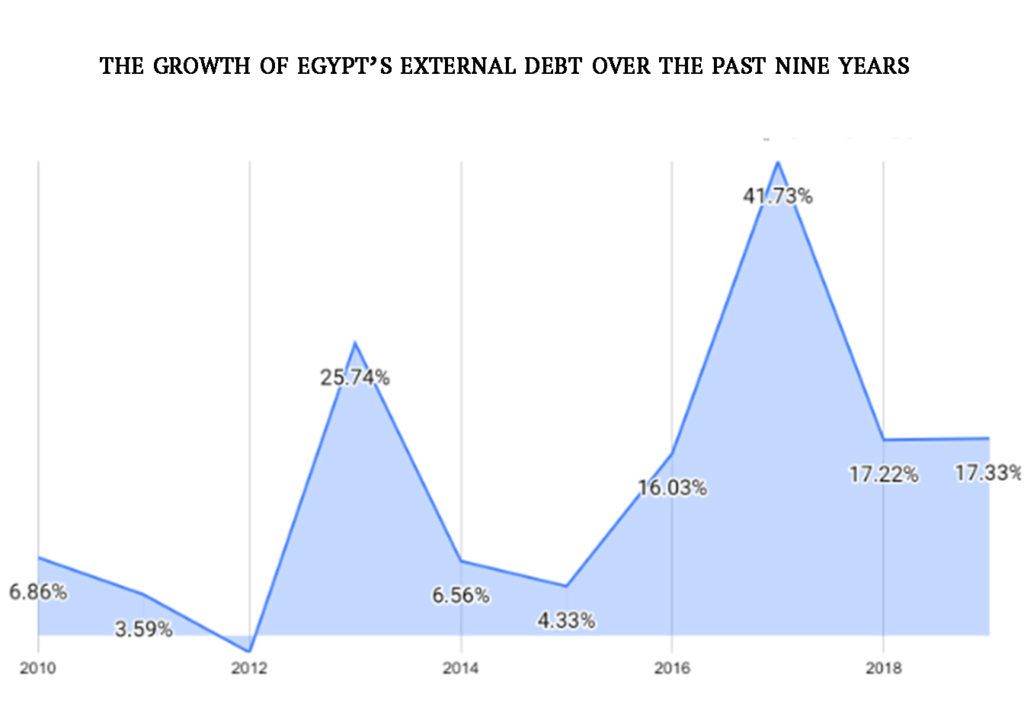 Based on CBE data

“The government often resorts to foreign borrowing because it’s usually cheaper – in terms of interest rates – than domestic debt,” Khaled says. “So, the 2016 deal with the IMF made it easier to tap external debt.”

The CI Capital report stated that it doesn’t expect Egypt will sell dollar bonds in international markets, because they will be expensive — the bonds will likely carry a fairly high rate of 6 to 9 percent, Khaled said.

What are the chances that Egypt defaults

The short answer is that there is no chance of default in 2020, according to the CI Capital report, which provides a picture of the foreign exchange reserves from the end of March to the close of the year.

The investment house initially projected about $10 billion in outflows of foreign investment from pound-denominated treasury bills, a value which amounts to 83 percent of the total $12 billion in holdings in Egyptian debt instruments at the close of March.

But these estimates were later revised after it became unlikely that there would be a greater exodus from holdings in Egyptian debt instruments, Khaled says. Accordingly, CI Capital updated its figures, projecting outflows of $53.4 billion in addition to $6.9 billion in payouts on foreign debt that will reach its maturity date in 2020.

About $12 billion of repayments due to Gulf countries are expected to be postponed and are excluded from the estimate, Khaled adds.

The chart below shows the expected foreign currency inflows and outflows. 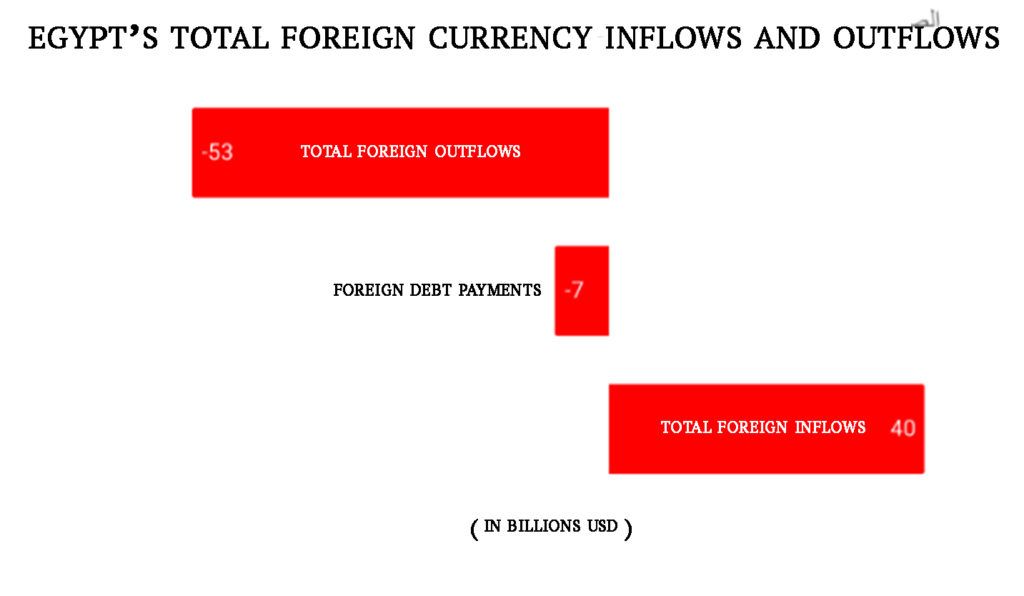 Based on CI Capital data

This translates into about $60 billion dollars of outflows in the period between March and December 2020. Inflows in the same period are expected at $40 billion, leaving Egypt with a funding gap of about $20 billion.

These figures can be juxtaposed, however, against the foreign assets available to the economy, which come in at around $60.2 billion, according to CI Capital. These are split between net foreign reserves ($40 billion), banks’ net foreign assets (-$3.5 billion), deposits not included in the foreign reserves ($6.9 billion) and debt securities ($5.2 billion).

The chart below breaks down the total foreign assets available. 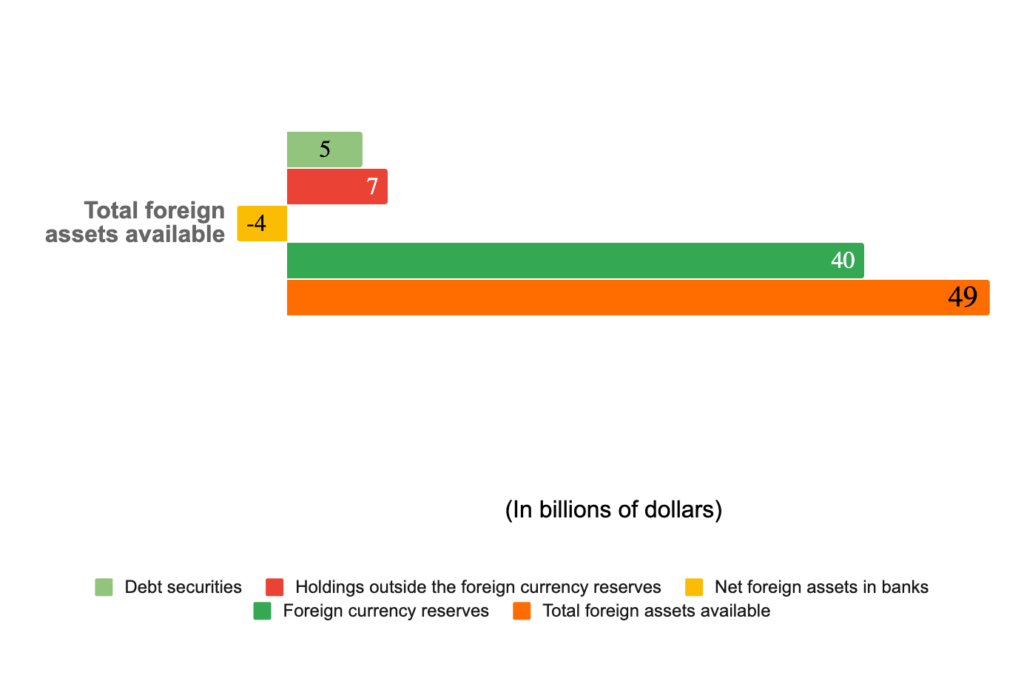 Based on CI Capital data

The deposits held outside the foreign currency reserves’ account is a relic from a mechanism the central bank introduced after the 2016 devaluation that was used to attract foreign investment to Egypt’s local debt market. Under this mechanism, investors purchased Egyptian pounds from the central bank directly, rather than banks which is normal practice, to invest them in Egyptian debt instruments, under the condition that, if the investors chose to leave the market, their investment would be repatriated in dollars, Khaled explains.

This system was phased out in 2018, and foreign investors get their FX needs from banks. However, those that invested in Egyptian debt in the 2016-2018 window are still entitled to repatriate their investments in dollars.

The debt securities are Egyptian investments in U.S. debt instruments and could be liquidated at any time, Khaled says.

As a whole, Egypt’s foreign assets can cover over 15 months of imports even after covering the $20 billion gap.

How technical is ‘technical assistance’?

Egypt, like other IMF members, already receives technical assistance under the periodic Article IV consultation — which involves IMF economists visiting a country to assess economic and financial developments and policies.

But the technical assistance Egypt has requested with the loan is different from the Article IV consultation, in the sense that they are more specific, Khaled says.

“Technical assistance usually tackles certain problems or weaknesses,” from the government or the IMF’s point of view, and it provides advice on how to fix them, he says.

Such weaknesses or shortcomings can be “easily deduced” by examining the measures the government didn’t carry out under the now-concluded $12 billion agreement. These measures are listed in the last program review report and include selling shares in government-run companies on the stock exchange, he says.

The government has only offered a small share in Eastern Tobacco Company so far, while the agreement sets out that Egypt must offer shares in at least four companies.

The agreement stipulated that Egypt should improve the efficiency of industrial land allocation through a market-based, transparent and competitive mechanism operating under accessible regulations.

AD
You Might Have Missed
Where do old lesbians go to die?
What we talk about when we talk about trees
Carbon Colonies & A Green New Deal
Mugamma revisited: Reimagining the building and the square
AD
Beesan Kassab
47 articles on Mada