اقرأها بالعربية
Tuition for empty seats: No salaries for teachers, no refunds for parents 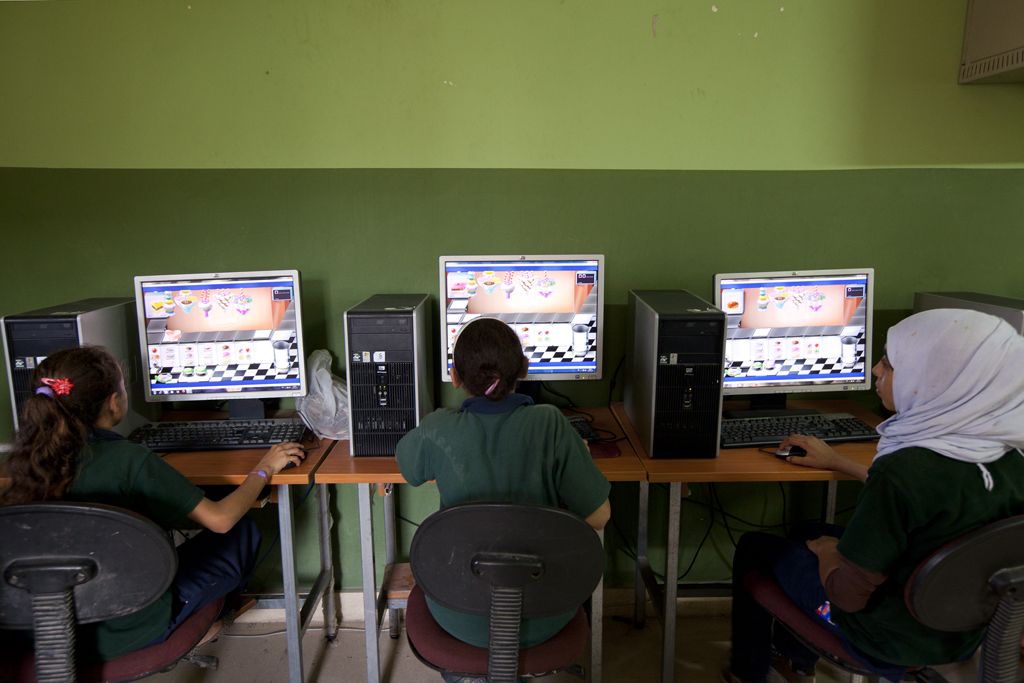 The COVID-19 pandemic officially arrived during the spring term. It was a matter of weeks before schools were suspended. Within a few more, the government announced that schools would be closed until the end of the year. Many parents who had already paid tuition fees for private schooling through the summer are now asking for at least a portion of their money back.

Private schools, most of which are run as for-profit businesses, have had mixed responses. Most have refused to refund any tuition, and some have stood their ground even as they have reduced their costs by laying off staff or forcing them to take unpaid leave.

The government, meanwhile, has stayed out of the conflict. “Now is not the time,” Tarek Shawky, the Minister of Education, said on television earlier this month. Schools are not legally bound to pay back the fees, he said, adding that the ministry would not look into the issue before the end of August because it requires detailed study.

Two million students attend a total of 7,500 private national and international schools, according to 2019 government data. Government schools, of which there are nearly 46,000, enroll about 19 million students.

National private schools collect tuition at the beginning of each semester, although some allow this payment to be made over two installments. International schools follow a similar payment pattern, although they also tend to fold in a percentage of the tuition for the following year into the current year’s payment. They also charge late fees and can withhold a student’s academic records in the case of missed payments, according to parents who spoke with Mada Masr.

Most schools have already collected tuition fees in full for the current year, and some have even asked for next year’s payments, says Rania Badran, administrator of one of the most popular Facebook groups for parents of children in international schools. Badran says the page has been flooded with posts from parents demanding repayment of at least part of the fees.

Most parents who send their children to private schools are salaried employees who take out loans from banks or informal savings groups to pay tuition fees, according to Nany Fekry, a mother of two students in a national private school in Cairo.

Education in Egypt is “dreadful” she says, but national private schools are “the only chance the children of the middle class have to get a half-decent education. We don’t save a dime, we’re only investing in our children.”

Hoda* works as a medical doctor and describes her income as decent, but she had to take out a loan to pay for her children’s private school. She told Mada Masr about a friend of hers who pays about LE100,000 ($6,350) annually in tuition and school supplies. The friend paid the school in full in December after participating in an informal saving group to which she contributes LE10,000 monthly. Hoda’s friend makes her money through an online store which has been battered by the pandemic.

Now the school is refusing to return the money, saying it has to pay wages for teachers, while Hoda’s friend is jobless, and still obligated to pay her savings group monthly.

Other schools have threatened to expel students to force parents to pay the fees in full. Fouad International School in the Sharqiya governorate is insisting on collecting the last LE30,000 installment of its LE135,000 tuition fees, despite forcing its physical education teachers and other staff on unpaid leave, according to several parents in the school. One parent said the school denied her a one-month grace period, despite the overwhelming circumstances. The school did not respond to Mada Masr’s request for comment.

Because the Education Ministry replaced final examinations with research papers, allowing students to matriculate from one year to the next, schools feel they have provided the service they were paid for and are entitled to collect full fees, says Adel Bakhit, a public school teacher.

Special needs students are the most affected by the suspension of schools, both financially and psychologically, said Badran, the Facebook group admin, because their tuition fees are generally higher than other students and they can’t do online classes.

A 2017 law stipulates that 10 percent of classes must include special needs students, such as those with attention-deficit or autism spectrum disorders. Each school must have special units to care for these students.

Heba*, a mother of a four-year-old child with autism, put in his application to school at the end of 2019 in order for him to begin in September 2020. The school offered to enroll him in private sessions from February to June, to help him prepare for full-time enrollment in September. When school was suspended in March, the administration offered to continue the sessions online, despite the fact that her son can’t be exposed to screens because of his condition. They also threatened not to admit her son in September as planned if she didn’t pay her fees in full.

She has already paid the school LE26,000 this term. “I’m still going to work and putting myself at risk just to pay for a service I’m not getting, ” Heba says. Her salary was cut by 20 percent this month.

Heba said private schools usually refuse to admit special needs students, and when they do, tuition fees are doubled to cover the cost of the special care unit. In reality, these units are often non-existent and the school just provides a “shadow teacher,” whose salary is paid for out of the parents’ doubled fees.

A handful of schools have agreed to share the burden with parents. Windrose Academy reduced its third semester’s tuition installment by 20 percent. Greenland International School has offered financial aid to struggling parents, and is accepting post-dated checks for next year’s fees. Others have cut next year’s bus fees.

Schools aren’t legally obligated to return the fees as long as classes continue online, lawyer Ahmed Ragheb said. But authorities should mediate between schools and parents for the public good, he said, giving the example of the central bank’s decision to postpone loan payments for six months, or the stipend offered to informal workers.

Schools say they are still paying expenses, chiefly staff salaries. That’s true for some institutions such as American City International School and Metropolitan International School. Many others, however, aren’t doing so. New Vision School has collected full tuition but gave its teachers the option to give online classes while cutting their salaries by half, an employee at the school who asked to remain anonymous said. Meanwhile, the school’s administrative staff was offered a choice between continuing normal work at half salary or going on open-ended unpaid leave, the employee said, adding that she chose the latter option.

Valley Language Schools in Giza is forcing teachers to be physically present in the school twice a week, even though study sessions for the end-of-year research projects are almost finished, according to a teacher at the school. Teachers who requested to work from home have been threatened with salary freezes, and those whose children attend the school and haven’t paid the last tuition installment had their salaries cut.

Meanwhile, Stanford Integrated Schools forced teachers, supervisors and drivers to take unpaid leave after finishing online review with students at the end of March, according to a teacher at the school.

There is no easy way out of this problem, Ragheb said. If parents are paid back in full, school staff will suffer, including janitors and bus drivers. He suggests we find a way for schools and parents to share the losses.

AD
You Might Have Missed
Mugamma revisited: Reimagining the building and the square
What we talk about when we talk about trees
Where do old lesbians go to die?
Carbon Colonies & A Green New Deal
AD
Nada Arafat
13 articles on Mada

Topics
Related
Coronavirus
Garbage collectors do essential work without protection from coronavirus
Karoline Kamel | They do so at risk of infection, working within a system that does little to protect them.
Coronavirus
Facing both poverty and the virus, informal workers keep working and losing work
Omaima Ismail | Fatma Gamal, a mother of five, says her whole family has been put out of work because of the virus.
Coronavirus
After doctors blame administration for COVID-19 clusters at hospitals, Health Ministry circulates new procedures in internal memo
The index case for the latter two hospitals is still unknown
Coronavirus
Pandemic pushes work at home — and it’s not that great, new remote workers say
“If you don’t see facial expressions, you don’t understand how people are thinking”