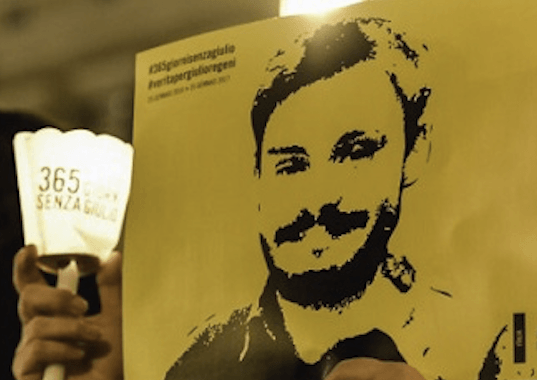 Events marking the anniversary of the brutal killing of Italian student Giulio Regeni four years ago in Egypt have been held in Italy over the past two weeks.

In Regeni’s hometown of Fiumicello, a candlelit vigil wove through the streets. At an event in the town theater, the president of Italy’s lower house of parliament renewed his calls for justice. Regeni’s parents, Paola and Claudio, published a book about their son. An Italian TV host traveled to Cambridge, where Regeni was a student, and brought his bicycle back to his mother in a publicized event. Small demonstrations were held in Rome and other cities. On the airwaves, criticism of Egypt’s role in the investigation of Regeni’s death was rekindled.

Amid it all, Egypt’s Foreign Ministry in Cairo sent instructions to the Egyptian Embassy in Rome ordering it to maintain a low profile and not to make any statements about the case, according to a well-informed Egyptian official.

The directive to the embassy is emblematic of Cairo’s approach to the case, as Egyptian authorities have delicately managed their relationship with the Italian government while also stymieing efforts to hold any officials accountable for Regeni’s murder. At the same time, Italy has maintained — and even strengthened — its economic ties to Egypt over the past four years, despite continued calls and grassroots pressure for the case to be resolved.

Regeni, a Ph.D. candidate at Cambridge University who was researching independent trade unions in Egypt, disappeared from a metro station on January 25, 2016 — the fifth anniversary of the 2011 revolution — while on his way to meet a friend in downtown Cairo. His body was found several days later, on February 3, on the side of a highway on the outskirts of the city bearing marks of severe torture.

Italian prosecutors have been investigating Regeni’s killing in coordination with Egyptian officials but after nearly four years, no one has been charged.

This past December, an Italian parliamentary commission set up to review the case held its first session in Rome. Lead Italian prosecutor Sergio Colaiocco told the commission that Egyptian officials deliberately tried to mislead the investigation on at least four occasions — including claiming Regeni might have died in a car accident and then suggesting he was killed by a criminal gang of five, who in turn were shot dead by Egyptian police. Colaiocco also said the Italian post-mortem examination found Regeni had been tortured “in stages” between January 25 and the day of his death. His body sustained injuries that showed he was beaten with “kicks, fists, sticks and clubs”, and that he died from a broken neck, Colaiocco said.

Last year, Rome prosecutors placed five members of Egypt’s security forces under official investigation for their alleged involvement in Regeni’s disappearance. The Associated Press identified the five at the time: Major General Tarek Saber, a senior official at the National Security Agency at the time of Regeni’s death who retired in 2017; Major Sherif Magdy, who also served at the NSA, where he was in charge of the team that placed Regini under surveillance; Colonel Hesham Helmy, who served at a security center in charge of policing the Cairo district where Regeni lived; Colonel Asser Kamal, who was the head of a police department in charge of street works and discipline; and junior police officer Mahmoud Negm.

At the January 25 commemoration event in Fiumicello, the president of the Chamber of Deputies, Roberto Fico, read out the names of the five men from the stage. “We have these names,” Fico said, according to La Republicca. “2020 must be the year of truth, the year of Giulio Regeni.”

In mid-January, Italian Prime Minister Giuseppe Conte met with Egyptian President Abdel Fattah al-Sisi in Cairo for talks on the crisis in Libya. During the meeting, the two discussed the ongoing joint investigation into Regeni’s killing, though the details of the discussion were not revealed.

After the meeting, Egypt’s public prosecutor Hamada al-Sawy announced that a new investigative team had been formed to look into the case. Sawy did not state why the new team had been formed, but according to the Egyptian official, the move allows Egypt to further procrastinate while appearing to make progress on the issue.

“The simple fact is that this case involves some people who have to be protected and it is highly unlikely that anybody will end up being scapegoated,” the source said, adding that he expects the case to remain unresolved for the foreseeable future.

Regeni’s death initially impacted relations between Cairo and Rome, with Italy recalling its ambassador to Egypt in April 2016 in objection to Egypt’s unwillingness to cooperate with the investigation. Yet a little over a year later, a new ambassador was appointed and returned to Cairo in August 2017. For the past several months, Regeni’s parents have increasingly called on the Italian government to recall the ambassador once again.

Meanwhile, top-level economic and diplomatic ties between Cairo and Rome have strengthened over the past four years.

Both Egypt and Italy have to appear as if they are working on the case, but the expanding economic interests between the two countries as well as Italy’s appreciation of Egypt’s efforts to virtually halt illegal migration from its shores mean that the case will continue to go in circles, the source said.

At the forefront of the strong bilateral ties is Italian oil giant Eni, which discovered the massive Mediterranean gas field Zohr off Egypt’s coast in 2015. Since then, the company has had overall investments in Egypt that top $13 billion, according to CEO Claudio Descalzi, who visited Cairo last year and held talks with Sisi, Minister of Petroleum Tarek al-Molla and head of the General Intelligence Directorate Abbas Kamel.

Eni continues to develop new wells in the Zohr gas field and to expand its investments in Egypt, most recently signing oil and gas exploration agreements to develop concessions in the Western Desert.

Meanwhile, in December, Italian ambassador Giampaolo Cantini held talks with Egypt’s Minister of Military Production Mohamed al-Assar aimed at boosting joint cooperation in manufacturing for defense and civilian industries. Egypt and Italy signed nine memorandums of understanding, including on the establishment of an integrated Italian trade and logistics entity in Cairo, according to a statement by the Supply Ministry.

The same month, Minister of Trade and Industry Amr Nasser said trade between Egypt and Italy hit US$7.2 billion in 2018 and called Italy one of Egypt’s most important global trading partners while speaking at the second Egyptian-Italian Economic Forum in Cairo.

While the economic deals continue to grow, Italy may use the political pressure it faces over Regeni’s case as further leverage to secure even more deals with Egypt, according to the Egyptian official. “What is likely to happen is perhaps some mega-economic deal to accommodate the Italian government,” he said.

Back in Italy, Regeni’s parents are continuing their tireless campaign to keep the case in the public eye and to call for justice for their son four years after his killing.

“We need Egypt’s cooperation and we cannot obtain it after ‘scolding’ them only to then welcome them with a red carpet,” Paola Regeni, Giulio’s mother said on stage in Fiumicello on January 25. “Over these past four years we have seen an expansion of business between these two countries, therefore we will never be able to squeeze them. This is the time for choices.”