At doctors’ memorial service, anger and calls for health minister to resign
By
Mada Masr 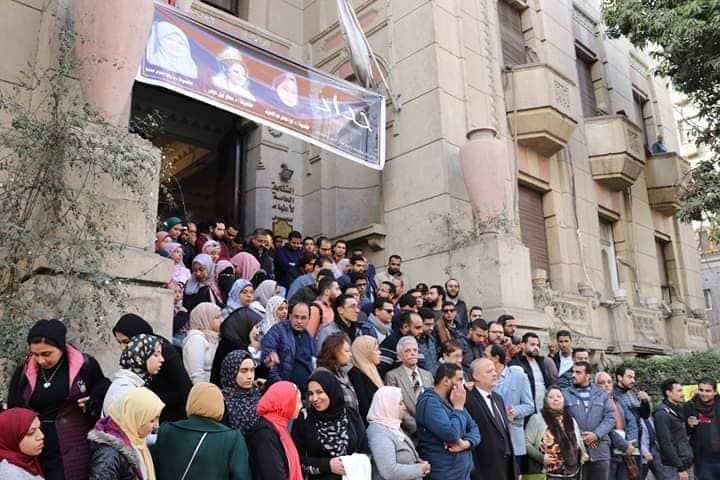 A memorial outside of the Doctors Syndicate headquarters for the three doctors who died in a microbus accident on January 15, 2019.

A memorial service at the headquarters of the Doctors Syndicate in downtown Cairo on Tuesday was followed by a standing protest for three doctors who were killed in a road accident that left 11 others seriously injured. Their deaths have sparked outrage within the syndicate, which is accusing the Ministry of Health of routinely mistreating doctors. The syndicate has filed a request with the public prosecutor to investigate the accident and hold those responsible in the ministry to account.

The doctors, all of whom are women working for the ministry in the governorate of Minya, were pressured by ministry officials to travel to Cairo for a women’s health training on last-minute notice without proper travel arrangements, according to a number of survivors and syndicate members. The microbus the doctors were riding collided with a truck in the Karimat area on the Eastern Desert Road early in the morning of January 15. Rania Moharram, Samah Nabil Awad and the microbus driver Wael Mohamed were immediately killed. A third doctor, Nora Kamel Abdel Latif, died of severe head injuries two days later. Eleven other doctors were seriously injured, including one woman who suffered a miscarriage and had to have her uterus removed.

“This is a blow to us all,” Ehab Taher, the Doctors Syndicate Secretary-General, said in a press statement posted by the syndicate’s website. “We did not imagine that administrative abuse could be so severe as to make us lose three promising young doctors.”

After the memorial, a crowd stood on the steps of the syndicate headquarters on Qasr al-Aini street and chanted against Health Minister Hala Zayed, calling for her to resign or be removed from her post.

“Where is the health minister? Why didn’t she come today to give her condolences?” Taher asked in his statement.

Ahmed Sadek, a member of the syndicate’s branch in Minya, told Mada Masr that the group of doctors had received threatening SMS messages from officials ministry officials ordering them to participate in a training course in Cairo. If they refused, the doctors would be transferred away from the health units in which they worked.

On Saturday, the syndicate referred the directors of the medical departments of Abu Qurqas, Samalout and Minya as well as the Assistant Secretary of the Ministry of Health in Minya and Zayed’s assistant secretary for healthcare initiatives to the syndicate’s investigative committee. The syndicate has also filed requests with the public prosecutor’s office to investigate the deaths.

During a TV interview on DMC on Saturday,  the syndicate’s Treasurer Mohamed Abdel Hamid said that the number of doctors resigning from the Health Ministry due to administrative abuse is on the rise, emphasizing that the number of resignees rose to 3,507 in 2019, up from 2,600 in 2018.

According to Abdel Hamid, orders like the one that forced the doctors to suddenly travel to Cairo “happen every day and every year, but because a road accident happened this time, people started realizing that there is administrative abuse,” Abdel Hamid said.

“This is the norm in the Health Ministry. You receive an order and you either have to obey or be punished, it could be a sudden secondment that starts the next day, and there’s no regard for the doctor’s social or psychological circumstances. The argument is always that the work is needed.  If the doctor refuses the assignment, all sorts of abuse can happen: penalties, termination or relocation to distant units,” he continued. “We don’t have an issue with doctors being relocated, but it has to happen in an organized manner, which is something that happens in the whole world,” he adds.

The doctors in the accident were all carrying out their “takleef” service in Minya, according to Sadek, a member of the syndicate’s branch in the city. “Takleef” is a decades-old scheme through which doctors are assigned to compulsory service within the ministry at the start of their careers. The health minister has faced controversy in recent months after announcing changes to the “takleef” system last October, which critics said were announced too abruptly and without a clear plan for implementation.

Earlier this week, the syndicate formally requested that President Abdel Fattah al-Sisi and Prime Minister Mostafa Madbouly classify the three deceased doctors as “martyrs” and grant their families the associated privileges, which include monetary compensation. The syndicate also appealed to Sisi and Madbouly to take all the necessary measures to provide optimum medical care, compensation and moral support to those injured in the accident.

Sadek said the syndicate also called for measures to prevent doctors from being forced to travel via unsafe transportation and proposed that the Transport Ministry offer special rail subscriptions to medical practitioners.

The Doctors Syndicate also called on its members to attend a general assembly on March 13 to evaluate the way the Health Ministry and concerned authorities handled the accident. The general assembly will also discuss potential measures to end all forms of administrative abuse along with the usual demands to raise wages, improve the work environment, and secure hospitals.

Topics
Related
healthcare reform
Doctor assignments: Will the new system improve government healthcare?
Mostafa Mohie | Over the years, the takleef system was abandoned or constricted in most fields, besides medicine.
Doctors Syndicate
A new healthcare system in Port Said
Mona Selim | Ultimately, the government would have to cover the health insurance costs of 30 million people
healthcare reform
One resignation after another: Why are doctors disappearing from government hospitals?
Mohamed Hamama | Recent months have seen a spike in the number of Health Ministry doctors requesting unpaid leave or resigning
Doctors Syndicate
Collective action anesthetized: The Doctors Syndicate from 2016-2018
Hadeer El-Mahdawy | How has the Doctors Syndicate gone from a vehicle for mobilization to beset by low participation?