Merkel at Berlin conference on Libya: Arms embargo to be ‘more closely monitored than in past’
By
Mada Masr 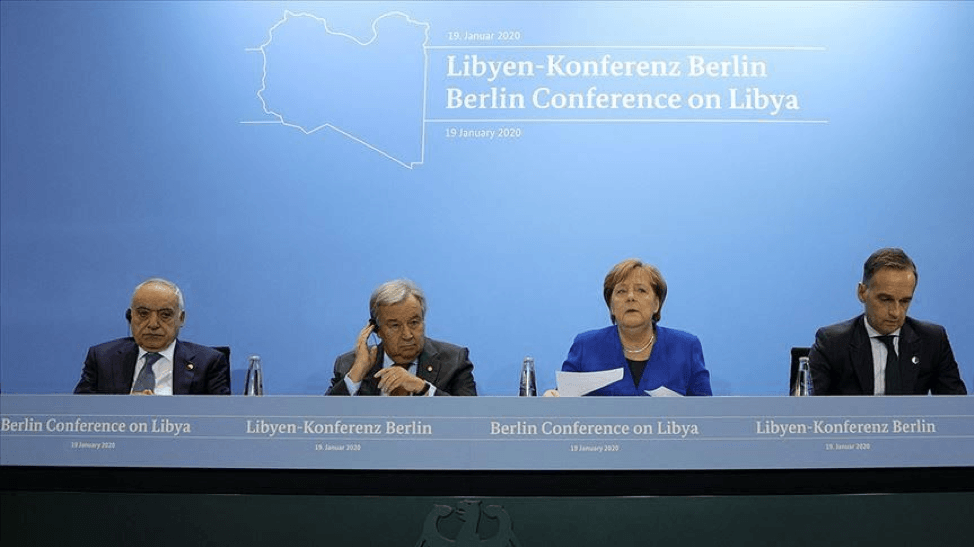 Foreign powers agreed at a conference in Berlin on Sunday to bolster a tentative ceasefire and better enforce an existing arms embargo in Libya, where a 10-month offensive on the capital of Tripoli has left more than 150,000 people displaced.

Khalifa Haftar, the head of the self-styled Libyan National Army, and Fayez al-Serraj, the head of the UN-backed Government of National Accord, both attended the conference, alongside leading state figures from the United States, France, Italy, the United Arab Emirates, Egypt, Russia and Turkey.

At the conclusion of the one day conference, which had been in the planning stages for months, German Chancellor Angela Merkel told reporters that participants agreed that the truce in Tripoli, which was announced by Russia and Turkey and put into effect on January 12, should be turned into a permanent ceasefire to allow a political process to take place.

Reuters reported that the jointly issued communique includes terms that will see a special committee made up of five military men from the GNA and LNA to monitor the truce. Foreign powers active in Libya also committed themselves to upholding the arms embargo and to stop supplying weapons to both sides.

The United Panel of Experts has repeatedly documented violations of the arms embargo, with international parties supplying weapons to the GNA and LNA.

However, Serraj and Haftar did not meet at the summit, according to Merkel.

While media attention was focused on the high-level diplomatic meeting in Berlin, fighting broke out south of Tripoli, where the sound of gunfire and explosions could be heard on the frontlines to the south of the capital.

A senior officer in Haftar’s ranks told Mada Masr that “GNA-affiliated forces are the ones who have repeatedly violated the ceasefire agreement since it was announced seven days ago.”

After the GNA and LNA pledged to adhere to the jointly called for a ceasefire on January 12, Tripoli has been in a state of cautious calm after a 10-month period of grinding combat that began in April 2019. The news outlet Bloomberg reported that in the leadup to Russia and Turkey calling for a ceasefire, there was a scaling back of Russian Wagner Group mercenaries, whose deployment to fight alongside Haftar was instrumental to the LNA’s rebound from a major setback in losing their primary operations room in Gharyan last year.

Without Russian troops, Haftar may face a significant deficit in fighting and technical power on the frontlines, as Turkey has deployed up to 2,000 fighters from Syria to the frontlines to support the GNA.

“If Wagner stops helping Haftar, Sudanese mercenaries will have great difficulty substituting for the Russians. That could throw Haftar back into the vulnerable position of four to five months ago,” Jalel Harchaoui, a researcher who focuses on the international dimension of the Libyan conflict, previously told Mada Masr, ahead of the Russian-Turkish ceasefire push.

The UN Panel of Experts noted in a report published in December that Haftar had purchased the support of at least 1,000 troops from Sudan’s Rapid Support Forces.

In the face of the potential deficit, Aguila Saleh, the head of the eastern government’s parliament, which is affiliated with Haftar, gave a speech in Egypt’s Parliament last week stressing that there may be a need for Egyptian military intervention after Tripoli’s decision to send troops to Libya.

Egypt has assisted Haftar militarily in the past. In October 2017, Egypt carried out airstrikes on the eastern city of Derna on behalf of its ally Haftar. An Egyptian source said at that time that Egyptian forces were responsible for these airstrikes, despite the Foreign Ministry’s denial. However, it has not committed to a troop surge in the conflict in Tripoli.

A meeting between Serraj and Haftar in Russia to sign a long term truce deal fell apart last week, after the LNA leader refused to sign the document and left Moscow, the site of the talks. According to the New York Times, the United Arab Emirates, which has aided the offensive on Tripoli with drone strikes, urged him to keep fighting rather than accept a cease-fire. In the week since the ceasefire was put in place, independent aircraft trackers have noted a significant uptick in UAE military freight aircraft potentially traveling to Libya.

A day before the commencement of Sunday’s conference, all oil terminals in the east of the country halted production, as protesters affiliated with Haftar announced they are closing ports and oil fields controlled by the LNA to prevent an inflow of funds to the internationally recognized Central Bank of Libya affiliated to the GNA.

The National Oil Corporation in Libya declared force majeure after oil production at the eastern facilities was suspended and accused Haftar of blockading the oil ports and fields.

On Sunday, the National Oil Corporation stated the major southwestern fields of El Sharara and El Feel were closing after forces loyal to Haftar shut a pipeline.

In Berlin, the conference’s primary concluding draft statement called on combating actors in Libya to abstain from attacking oil facilities and recognized the National Oil Corporation in Tripoli as the only legitimate entity allowed to sell Libyan oil.

The LNA’s spokesperson announced in a press conference on Saturday night the military’s full support to protesters’ decision to shut down oil facilities but denied the LNA’s responsibility for this action.

The National Oil Corporation has estimated that the stoppage will cut crude oil output by 800,000 barrels and cause financial losses of $55 million per day,

Topics
Related
Libyan conflict
From Tripoli’s front lines: How Haftar recovered from the setback in Gharyan and what’s next for the advancing LNA
Tensions within the LNA have not faded away, despite the presentation of a unified front.
Libyan National Army
The Libyan National Army’s patchy walk toward Tripoli
3 months into the assault on Tripoli, Mada takes stock of the LNA's alliances after a major setback
Libya
After failed meetings with Sarraj, Haftar’s move to mount offensive on Libyan capital sparks disagreement with Egypt
Military strongman Khalifa Haftar set on entering Tripoli, confirm diplomatic and military sources
Libya
Palermo conference: Haftar invited to Tripoli, plan for 2nd Italian conference to discuss 2019 Libyan elections
LNA head Khalifa Haftar leaves Palermo conference with invitation to visit Triploli