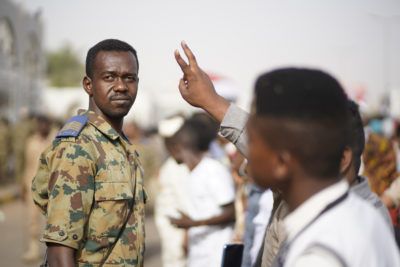 Hundreds of Sudanese security forces are staging a rebellion, firing live rounds into the air and clashing with the country’s Armed Forces around a number of military headquarters in Khartoum and other states, amid civilian panic and chaos in the city.

According to government and security sources who spoke to Mada Masr, the rebellion was prompted by the Sudanese government’s decision to dissolve the operations wing of the National Intelligence and Security Service (NISS), dismissing its members and turning it into an intelligence-gathering body.

The operations wing of the NISS, which was renamed to the General Intelligence Service in 2019, was behind the violent crackdown on protests in Khartoum and other Sudanese states in the mass uprising between December 2018 and April 2019 that ousted former President Omar al-Bashir.

Eyewitnesses in Khartoum told Mada Masr that the rebellion started when hundreds of soldiers from the operations wing fired shots into the air near their headquarters in Khartoum on Tuesday morning, before closing off main roads.

Eyewitnesses in the Taif neighborhood in eastern  Khartoum reported the sounds of heavy gunfire and sound grenades started early Tuesday morning at the headquarters of the operations wing, located close to the Khartoum airport. As a result, airport authorities stopped all air traffic, according to sources in the airport that spoke to Mada Masr.

According to the Central Committee of Sudan Doctors,  one civilian, a 15-year-old boy, was injured after being shot in the jaw by the operations wing forces’ gunfire.

Employees in the Sufian and Hadida oil fields in the state of East Darfur told Mada Masr that soldiers from the operations wing stormed the two fields and disabled their communications network, before confiscating oil engineers’ car keys and instructing employees not to move.

Later in the day, clashes broke out between the operations wing and the Sudanese Armed Forces and the Rapid Support Forces (RSF), who were deployed to contain the situation. Eyewitnesses in Kafouri told Mada Masr they saw forces from the intelligence body and the military exchange fire.

Holding a press conference in the South Sudanese capital of Juba, the vice president of Sudan’s Military Council and RSF head General Mohamed Hamdan Dagalo “Hemedti” accused former NISS head Salah Gosh, who has been residing in exile in Cairo since Bashir’s ouster last year, of leading the insurrection.

Hemedti also took aim at the current general intelligence head, who he said had failed to act on orders issued seven to eight months prior to disarm the operations wing.

A government source told Mada Masr that the government is waiting for further intelligence from its security committee to evaluate the situation and confirmed that military units in Khartoum are on high alert.

After the decision to restructure the armed wing of the former NISS, the transitional government decided to reassign to the RSF or terminate 13,000 members of the operations wing, a decision met with opposition from the soldiers, who refused to hand over their headquarters.

A source close to the RSF confirms that the reasons for the conflict go back to the transitional government’s plan to restructure the NISS, supported by the Armed Forces and the RSF. The source told Mada Masr that the soldiers were given a choice between being dismissed or absorbed into the Armed Forces or the RSF. The source added that there were conflicts between some of the dissolved wing’s members and leadership in the security apparatus, the army and the RSF.

In the wake of Bashir’s ouster, Sudan’s military established the Transitional Military Council to rule the country, which was headed by Lieutenant General Abdel Fattah al-Burhan, with Hemedti serving as the vice-chair. After months of negotiation with civilian opposition figures, the TMC reached an agreement with the Coalition for Freedom and Change on a 39-month power-sharing agreement, after which elections will be held.

Topics
Related
Sudan
Sudan’s revolution 1 year on: Families of disappeared, martyrs still wait for justice
Mohammed Amin | Military members of the government, especially Hemedti, are likely responsible for the violence.
Coalition for Freedom and Change
Sudan peace negotiations up for grabs: How Hemedti is exerting influence in negotiations in Juba
Mohamed al-Amin | Sudan's Sovereign Council announced that direct talks would be postponed until February.
attacks on civilians
Sudan opposition rejects committee report blaming sit-in attack on rogue security officers
Protesters rejected the report as an attempt to shield the military council from responsibility
military coups
Thousands fill Khartoum streets in ‘millions march’, driven back by security forces under gunfire, tear gas
Security forces fired teargas at protesters who continued to press on toward the presidential palace