اقرأها بالعربية
Gone with the wind: The flotation’s impact on Egyptian exports

When asked how Egypt’s currency flotation boosted exports, Mahmoud Sarag, the chairman of the Leather Export Council put it this way: “We import the buttons. We import the zippers. And then we cheer when we export the ready-to-wear shirt.”

Three years ago, on November 3, 2016, Central Bank Governor Tarek Amer announced the liberalization of the exchange rate. The decision was expected, especially after the boom in dollar circulation on the black market. The decision was just one in a series of austerity measures in an economic reform program set forth by the government’s loan agreement with the International Monetary Fund.

At the time, the government argued that flotation would give a strong boost to national exports. The logic seemed straightforward: the devaluation of the Egyptian pound meant that the dollar would be worth more against the pound, and consequently the price of Egyptian products in foreign markets would drop, making them more competitive.

This logic has some merit. The IMF published a report on the relationship between local currency depreciation and export growth rates around the world. The study analyzed annual export data from 60 countries between 1980 and 2014, and it concluded that for every 10 percent devaluation in currency, there is a 1.5 percent increase in exports.

If this applies to Egypt’s case, then we should have seen a 7.5 percent jump in national exports as a percentage of the GDP, given that the Egyptian pound was devalued by 50 percent after the flotation. But this did not happen — Egyptian exports grew at a much lower rate than expected. And the growth mainly occurred in oil exports, after discoveries of new natural gas fields in the Mediterranean Sea. So what went wrong?

According to a report issued by the World Bank last July, Egypt witnessed a steady growth in export rates during the first decade of the 2000s due to bilateral trade agreements and the government’s strategy to transform Egypt into an export-based economy. Since 2003, when the government partially floated the pound, goods exported by Egypt increased and became more diversified.

But the export growth was “short-lived” and “not sustainable,” according to the World Bank report. “Although Egypt succeeded in increasing the volume of its export goods and diversifying its exports basket, most of the exported products do not have a comparative advantage on the global level,” it states.

Growth in oil exports after the discovery of gas fields in the eastern Mediterranean was the main reason for the increase in Egypt’s total exports. Oil exports grew from $6.6 billion in the year of the float to $12 billion in the last fiscal year. Crude oil and natural gas make up 34 percent of Egypt’s total exports, and they are exported without any refining processes that would produce added value.

To add value, Egypt requires a large and robust industrial sector. And to increase exports, the industrial sector has to be developed enough to produce added value. This is not currently the case in Egypt, where the industrial sector only contributes 17 percent of the GDP. For this reason, export growth rates in non-oil merchandise have been more modest. Non-oil exports reached $15.1 billion in FY 2016/2017 and increased by $2 billion in FY 2017/2018. And in FY 2018/2019, an additional increase of $500 million was recorded, according to the IMF’s final review. 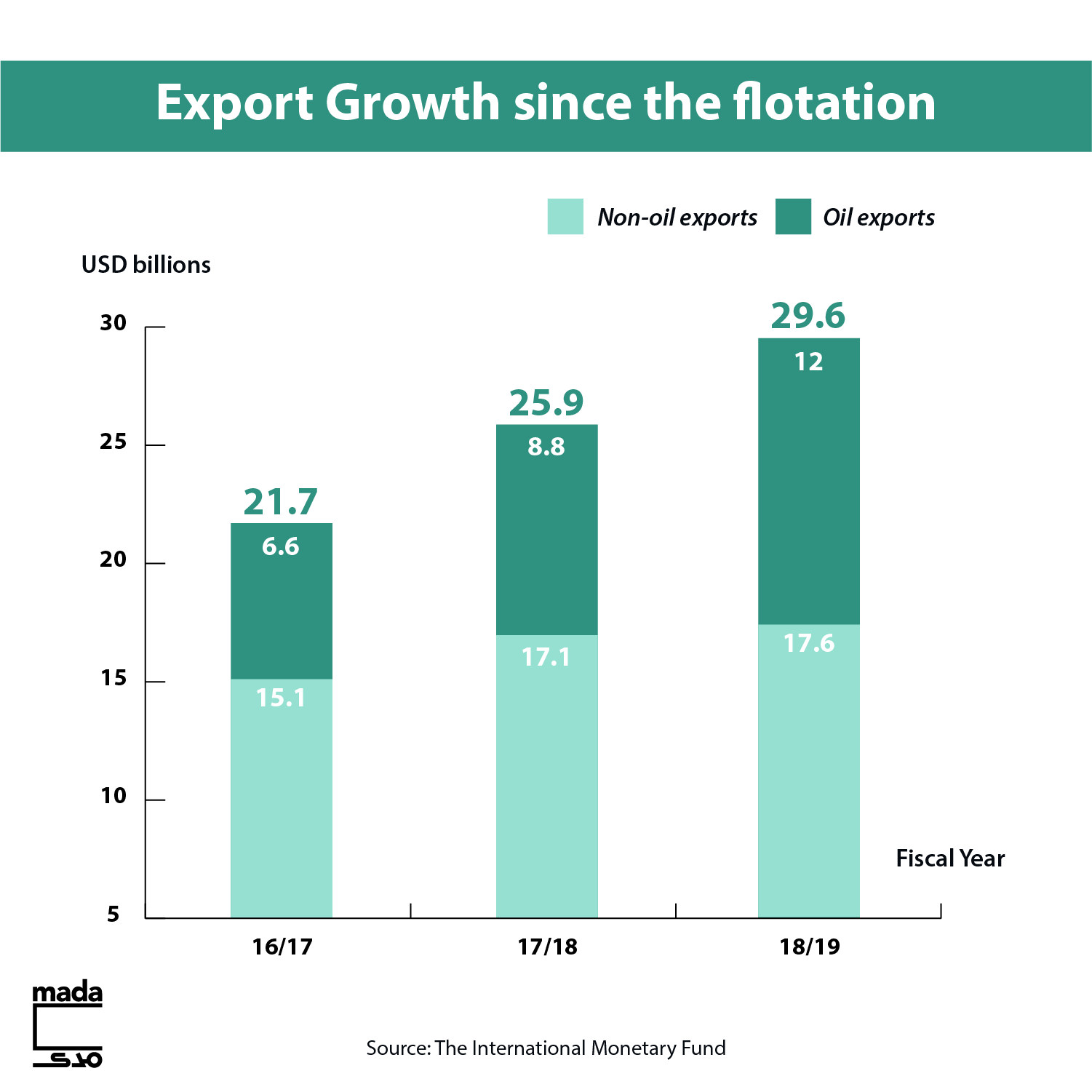 Infograph: Export growth since the flotation of the pound (oil and non-oil exports)

“This is an economic structure with a low-level industrial component, and it supports the export of primary, semi-finished and agricultural goods,” Amr Adly, an economics professor at the American University in Cairo, told Mada Masr. This is reflected in Egypt’s export distribution. 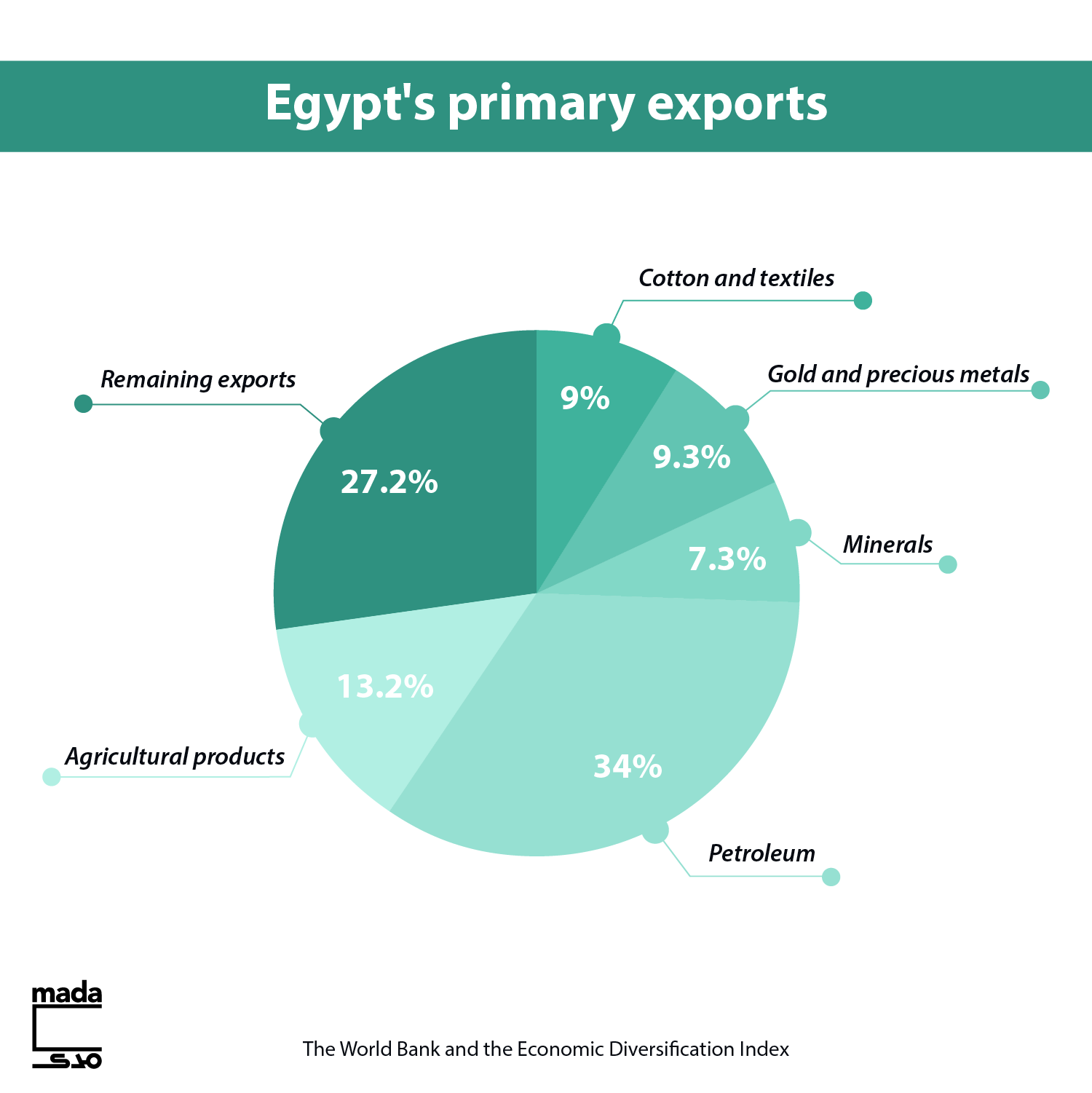 The World Bank has noted that the liberalization of the exchange rate was not enough to unlock Egypt’s potential in the exports sector, compared to other developing countries that saw export booms after the depreciation of their respective currencies.

One of the main reasons that Egypt failed to increase its export rates is the high cost of imported production inputs after the flotation, which hindered the sector’s ability to benefit from the decision. Sarag, the chairman of the Leather Export Council, told Mada Masr that there is an inverse relationship between the extent of a sector’s dependence on imported, intermediate goods and the advantages that sector can gain from the float. “Most industries in Egypt rely on imported intermediate goods and raw materials. Production costs increased, which forced exporters to increase their prices, and Egyptian products lost their competitive advantage,” he explains. In fact, intermediate goods and raw materials account for 47.7 percent of Egypt’s total imports, according to the government’s estimate. To Adly, the economist, this is the biggest program in Egypt’s industrial sector.

“Exports indeed increased during the four months that followed the devaluation of the pound, and that was because some factories had a stock of raw materials and intermediate goods, and some were able to import production inputs at pre-float prices. But once that stock ran out, there was a problem,” adds Sarag.

Hani Barzi, head of the Export Council for Food Industries, believes that exporters experienced a huge loss after the devaluation of the pound, especially in an industrial context in which imported intermediate goods account for 35 percent of the total production inputs. Some sectors, such as the vegetable oil industry, import 100 percent of the ingredients needed for production. Adly cites the petrochemicals sector, which contributes 16 percent of the national exports: Resins, which are imported, account for a third of the total production input in this sector. Similarly, in the textile and apparel industry, all the necessary dyes are imported from abroad. Simple goods, like wires and nails, are also imported.

Sarag agrees with Adly. In Sarag’s view, the lack of complementary local industries to supplement final products closed the door to any possible benefits from the devaluation of the pound. In addition, the drop in energy subsidies and spike in prices that came with austerity measures affected the competitiveness of some products in overseas markets. The World Bank’s report on Egypt’s failure to transition to an export-based economy pointed out that Egypt’s production structure has not been able to sufficiently integrate into global markets. The export sector has primarily relied on subsidized energy, allowing energy-intensive industries to dominate exports due to their lower production costs. Among these industries are fertilizers, cement, chemicals, iron and steel.

However, under the new economic reform program, the government moved toward eliminating energy subsidies for these sectors, which contributed to higher production costs, and thus less competitive prices. This is a problem that the government recently attempted to reverse by partially reducing energy prices for these industries.

When the government first removed subsidies, the competitive advantage of Egyptian products weakened. The cement industry is a good example to illustrate this phenomenon: While the sector currently faces an oversupply of product in a domestic market with low demand, it cannot export this surplus due to its lack of competitiveness with countries like Turkey and the UAE, where prices are comparatively lower.

On top of that, the government has neglected its commitment to subsidize the exports sector. Barzi explains that a subsidy framework was promised in the form of of a reimbursement program, in which the government was going to reimburse customs and taxes that were paid for importing intermediate goods meant for the production of export-oriented goods. However, the government has been late in paying this money back.

Complaints by exporters have grown over the last few months, as subsidy arrears have increased to roughly LE25 billion in outstanding payments. 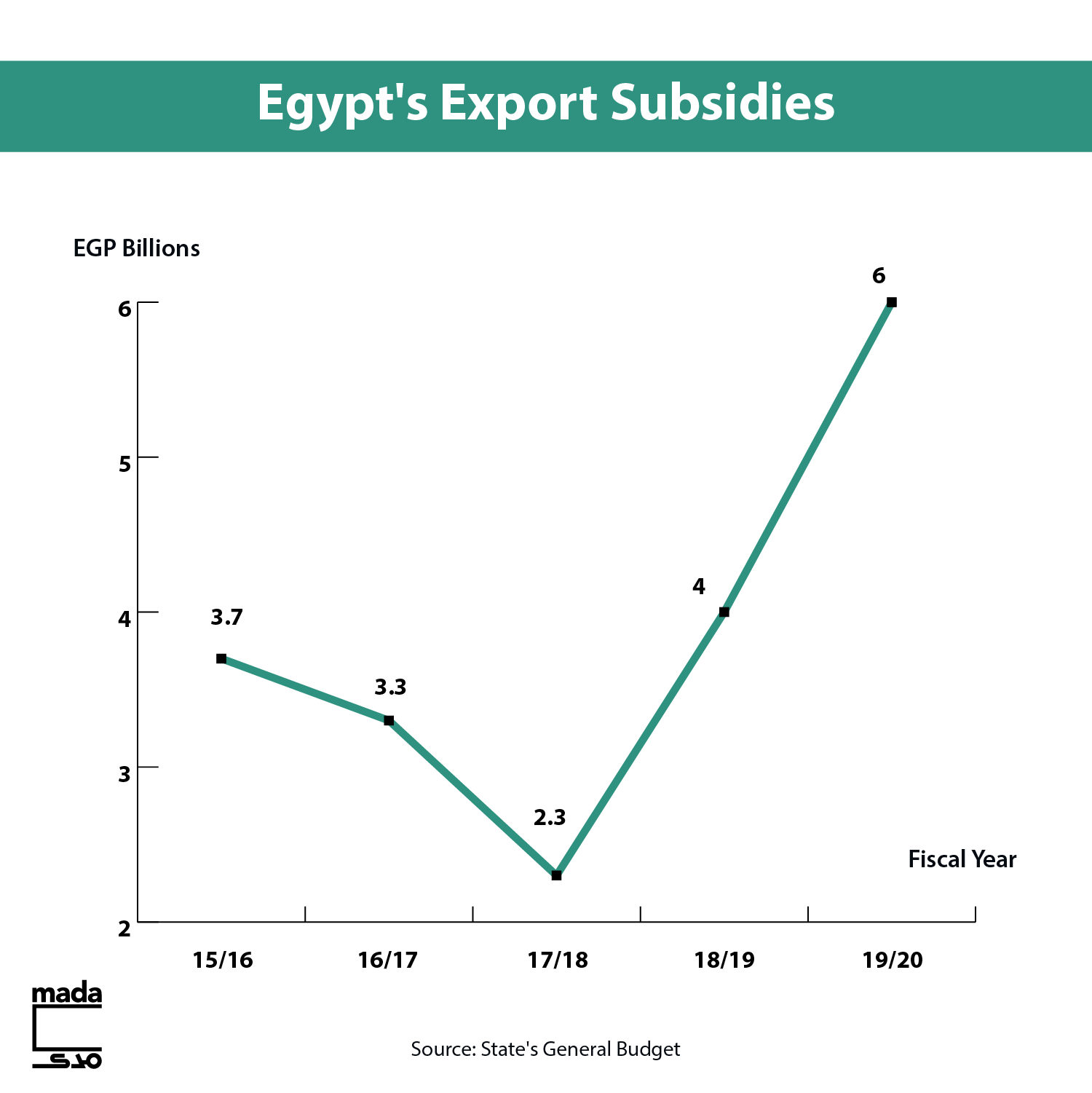 The government recently reached an agreement with exporters to gradually pay off the export subsidy arrears. Under one of the set of proposals, the Finance Ministry would offset its overdue payments by canceling the exporters’ debts from taxes and customs, which has already happened with six companies in a settlement worth LE800 million. The government also promised that beneficiaries would be granted priority in acquiring 6 million square meter land plots allocated for industrial activity by the government. Others would receive 10 percent of arrears in cash. But Sarag states that none of the arrears covered by the agreement have been paid off so far.

The government’s recent focus on the financial, non-export side of things has resulted in an overall surplus in the balance of payments, which went from a deficit of $13.7 billion in FY 2016/2017 to a surplus of $102 million.

Although the government erased its payment balance deficit, the trade deficit is still significant. The balance of trade, the difference between a country’s exports and imports, is the more important indicator in this context. Egypt’s trade balance suffered a deficit of 14.9 percent in FY 2018/2019, compared to 11.7 percent in FY 2016/2017. 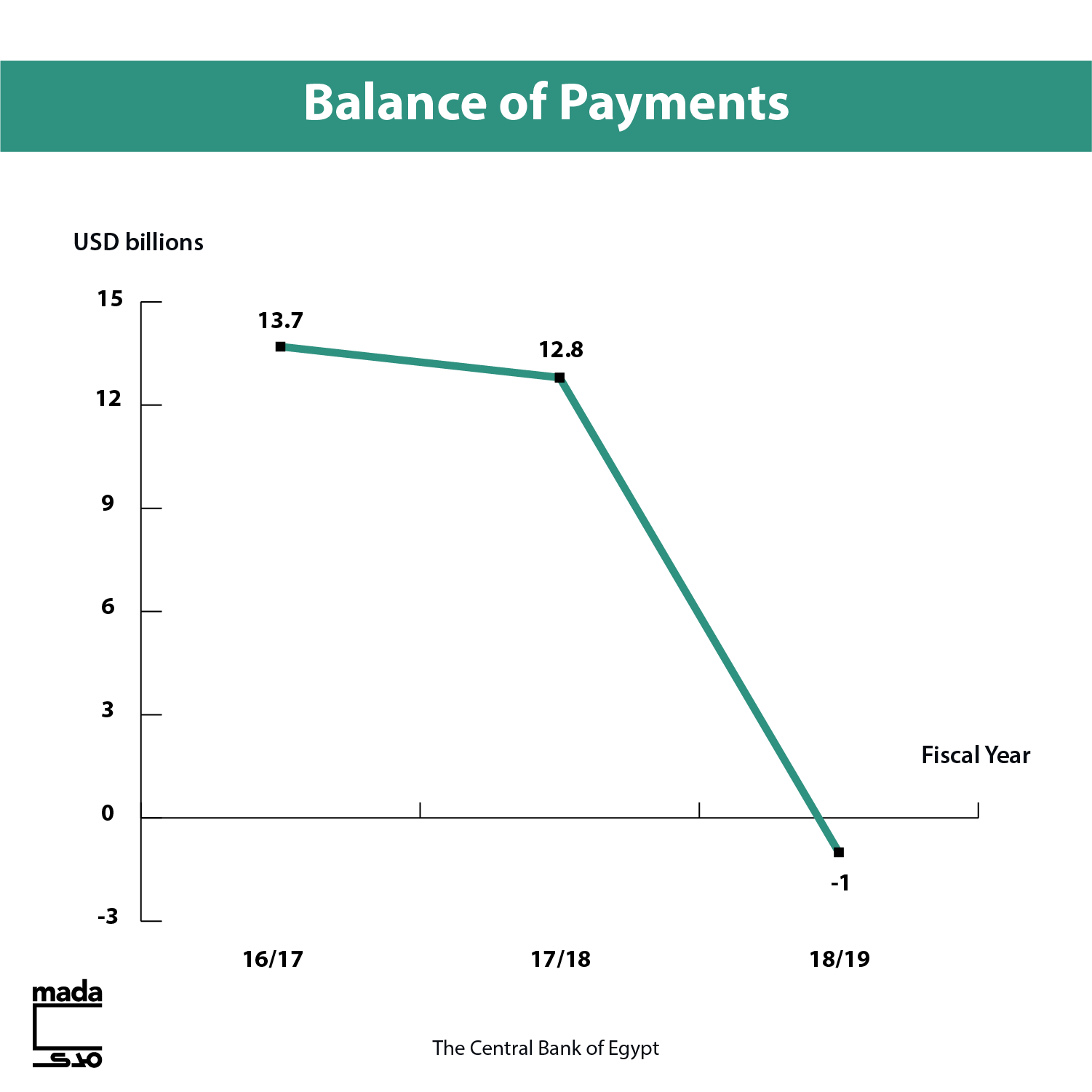 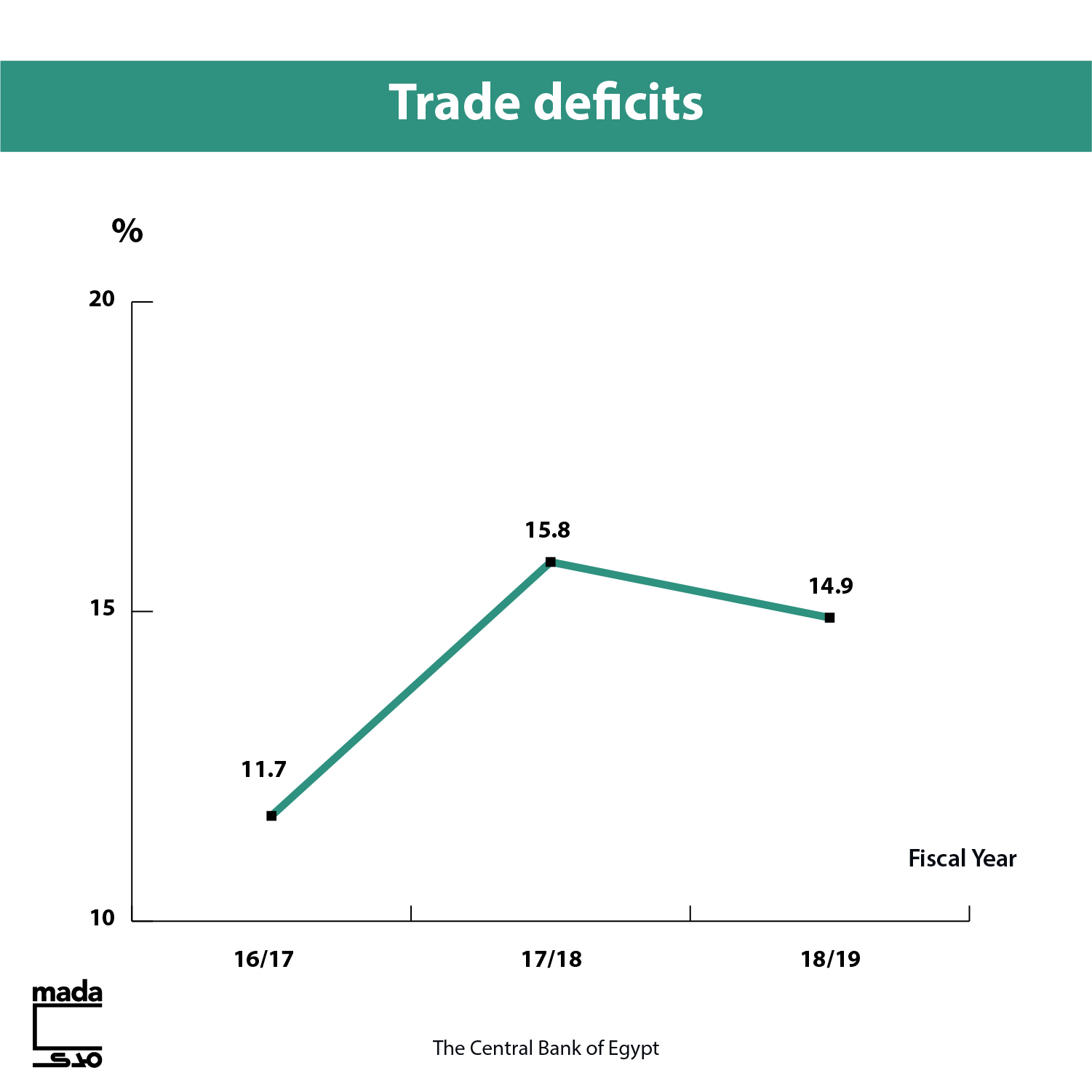 According to Adly, the lack of any clear strategy to increase exports as a proportion of GDP shows that all the government talk about strengthening the export sector is little more than media fodder.

AD
You Might Have Missed
Carbon Colonies & A Green New Deal
Where do old lesbians go to die?
Mugamma revisited: Reimagining the building and the square
If they steal Sheikh Jarrah
AD
Mohamed Ramadan
3 articles on Mada
Sara Seif Eddin
5 articles on Mada

Topics
Related
cement industry
Egypt’s cement industry disrupted by entry of military as major new market player
Omaima Ismail | The additional supply forced companies to lower their prices an average of 15% in the past year
austerity measures
Austerity measures a major cause of poverty increase, statistics agency advisor says
Beesan Kassab | The report shows that 32.5% of Egyptians live in poverty, marking the biggest increase since 2000.
business
The protection of competition: A suspended verdict
Hadeer El-Mahdawy | The discrepancy in the ECA’s positions on Uber and Glovo leaves questions about the role it plays
business
Have the IMF’s promises to Egyptians come true?
Beesan Kassab | The IMF did not only promise growth, it also promised inclusive, job-rich growth.