اقرأها بالعربية
Conversations from the Lebanese uprising | Ahmad El Assi: The movement is an opportunity to end the civil war 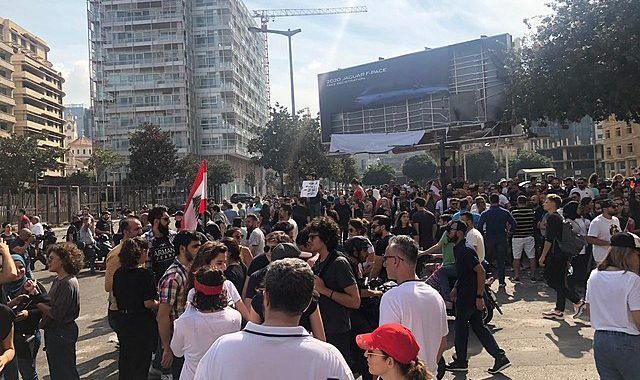 Mada Masr continues its series of short interviews with participants in the Lebanese uprising, this time with Ahmad El Assi, a member of the “Mowatenoon wa Mowatenat fi Dawla (Citizens In A State)” group. The interview has been lightly edited and condensed for clarity.

The group has been active for several months, making several of the same demands on which the current protests are focused. One of the symbols of the movement is former minister, Charbel Nahas, a critic of the socioeconomic system in Lebanon who has worked with others to provide a list of proposed solutions to the current economic crisis.

Mada Masr: How did the current economic crisis begin?

Ahmad El Assi: In truth, the crisis did not start one or two years ago. It began in the early 1990s when armed militias met with billionaires and agreed on the economic regime that governs today. This system lacks production and depends on imports and on remittance dollars. Since that moment, several crises occurred in Lebanon on the back of a shortage in foreign currency. These led to deeper dependence on external debt, which ultimately brought us to where we are today, with the dollar representing the main headline of the crisis.

Editor’s note: Prime Minister Saad Hariri announced on October 20 a rescue plan for the current economic crisis, which includes facilitating loans for youth housing, partnerships with banks to pay off public debt, stopping additional taxes with the continuation of older taxes on low-income brackets, working towards a loan from the International Monetary Fund to help low-income families and the abolition of the Ministry of Information.

AE: Of course not. These measures do not change the nature of the economic system. The main mission for us now is to become a force of change to replace the current economic system from its roots.

MM: People responded well to the sit-ins and to calls for a general strike and civil disobedience. What are the possible escalation tactics that can be used to achieve these demands?

AE: I disagree with you in the phrasing of the issue. We are not demanding, we are confronting. This is not a disagreement in terms, it is the mode of work. We will continue to confront the current government and our tactical demand is bringing down the government and establishing a transitional government that has financial and social priorities, as well as reorganizing political relations. On the financial side, the priority has to remain the fair redistribution of economic losses. This means that those who caused the crisis and accumulated billions of dollars in the banks have to bear the burden of these losses.

AE: I do not believe that Hezbollah is different from the other actors. What is certain is that each participant in the current authority represents it, and there is no doubt that Hezbollah wants to keep Michel Aoun as the President. As for Hezbollah itself, I don’t think they realize how pervasive the movement is — they underestimate it.

MM: When majority-Sunni Tripoli chanted with the revolutionaries from majority-Shia Tyre, Nabatieh and Dahieh, several observers said that people began to discover themselves, and went as far as saying that the civil war has ended now. What do you think?

AE: I understand the metaphorical meaning in this statement but I disagree. What is happening now in the streets of Lebanon is massive, and the scenes that represent overcoming the regional and sectarian past are various, and we seek to perpetuate that scene. But in reality the war ends when the state starts treating people as citizens and not in accordance with their sects. In other words, what is happening has not ended the effects of the civil war — rather, it is an opportunity for that to happen.

AD
You Might Have Missed
Mugamma revisited: Reimagining the building and the square
What we talk about when we talk about trees
Where do old lesbians go to die?
Carbon Colonies & A Green New Deal
AD
Omar Said
82 articles on Mada

Topics
Related
Lebanon protests
Conversations from the Lebanese uprising | Joelle Boutros: The civil war only really ended today, with this movement
Omar Said | "I think this is the first movement in the country’s modern history that encompasses all of Lebanon"
Israel
The merry-go-round of occupation: Unpacking the stakes of Israel’s election
For the second time this year, Israel is holding a general election in an attempt to form a coalition
Beirut
Metro al-Madina: Inside Beirut’s underground time machine
Mariam Kirollos | Located in the heart of Beirut’s vibrant Hamra Street, an area that served as a hub for intellectuals
censorship
The project of Mashrou’ Leila
Ahmed Wael | Mashrou' Leila's boundary-pushing and nuanced politics have often put them at odds with authorities.