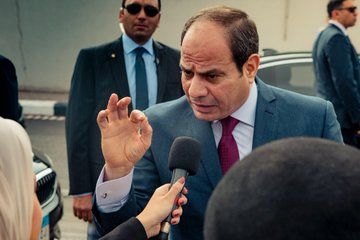 While thousands of demonstrators gathered at the Unknown Soldier Memorial in Cairo’s Nasr City district to chant, dance and wave flags in a show of support for President Abdel Fattah al-Sisi, small-scale scattered protests against the president emerged, amid heavily blocked and securitized roads across Cairo.

Buses carrying Sisi supporters were seen discharging them around the site of the gatherings in East Cairo — the same area that witnessed the violent dispersal of mostly Muslim Brotherhood protesters contesting the ouster of deceased President Mohamed Morsi and the subsequent military takeover in  2013.

Meanwhile, an eyewitness told Mada Masr that hundreds of residents in Warraq gathered to protest, chanting “Leave, Sisi! We won’t leave our homes!” Security forces dispersed the protestors with tear gas and birdshot pellets and chased them across the island. Additional security forces arrived at the island by boat from the Imbaba Corniche as protestors tried to assemble once more. Residents of Warraq have been in a long-running battle with state authorities who want to see the island evacuated and replaced by investment projects.

Another eyewitness told Mada Masr that the police fired shots in the air in an attempt to disperse dozens of anti-Sisi protesters who tried to gather in front of al-Istiqama mosque in Helwan after Friday prayers. The authorities also ordered all coffee shops and stores on the main streets to close for the entire day.

Both the Warraq and Helwan protests occurred against a backdrop of heightened security measures and pro-Sisi mobilization.

Since early on the day, security forces blocked all roads leading to Tahrir Square in Cairo, and set up checkpoints on the 6th of October Bridge and the 15th of May Bridge, all key arteries in the city.

A number of metro stations, including Opera, Sadat, Gamal Abdel Nasser and Ahmed Orabi stations —all of which are in the vicinity of Tahrir Square — were also closed after the Egyptian Company for Metro Management and Operation announced that the stations will undergo maintenance until Saturday morning.

A government source told Mada Masr that the Ministry of Interior has been instructed to respond initially to the expected demonstrations with limited force “for no more than a few minutes,” before resorting to all possible violent measures to break up any potential protests and marches.

Meanwhile, a source from the Nation’s Future Party told Mada Masr that the National Security Agency has instructed a vast number of health, education, and youth and sports directorates as well as oil companies across different governorates to gather their employees and join the pro-Sisi demonstrations taking place in Rabea al-Adaweya Square and in front of the Unknown Soldier Memorial. The party member, who is also a parliamentarian, said he learned about these instructions through informal phone calls he had with members of the National Security Agency.

Sources from the village of  Bani Mazar in Minya told Mada Masr that a group of families prepared 30 buses to drive people to participate in Cairo’s demonstrations in exchange for free meals. The Nation’s Future Party was also trying to rally more crowds from the same area in Minya, according to the sources.

In the same context, MP Hamdi al-Sisi told Mada Masr that the Nation’s Future Party Secretary in al-Haram has been rallying crowds in his constituency and urging other MPs to do the same in their respective constituencies to participate in today’s festival.

One independent MP told Mada Masr that he was warned by the National Security Agency against speaking about the ongoing events or the discussions around Sisi, even if he was to speak rationally. He also learned that other independent members of parliament received similar warnings.

Sisi returned to Cairo earlier today from New York, where he took part in the 74th United Nations General Assembly over the past week. Dozens of supporters received him with chants upon his arrival, even the timing of his return had not been announced previously. Upon arrival, the President told reporters: “You have to know that the Egyptian people have become very aware of how a spectacle is created to falsify reality and deceive the people. The Egyptian people now know these things, and that what was done before can’t be repeated for God’s sake and for your sake. Don’t worry about a thing.”

“This is a spectacle, similar to the previous one. It is all lies, slander, defamation by electronic battalions and some media outlets that work to present a false image. You must be aware of that. We are very strong with the will of God, the country is very strong with your support,” he added.

“The day I call on Egyptians, like I did on the day when I called on Egyptians to delegate me to fight terrorism on their behalf in 2013, [it will send] a message to the whole world, millions will come and not less,” said Sisi in a show of confidence in the people’s support for him.

Contractor-turned-actor Mohamed Ali has called for mass demonstrations on what he referred to as the “Friday of Salvation,” following a series of videos he has posted over the last three weeks exposing incidents of corruption in which the military is implicated.  On Thursday evening, Ali posted a plan for today’s demonstrations on his personal Twitter account, calling on people to take to the streets after Friday prayers, urging them to protest in the main squares and neighborhoods without necessarily venturing into Tahrir Square, which has seen a heightened security presence over the past week. Ali also advised protestors to keep a distance from the pro-Sisi demonstrations also expected to take place today.

Security forces have carried out a comprehensive arrest campaign over the past week after scattered protests broke out across several cities in Egypt last weekend and ahead of today’s expected protests, the largest such campaign since Sisi took power. As of Thursday night, the Egyptian Center for Economic and Social Rights recorded 2,076 arrests over the past week. Only 976 have appeared before prosecutors, while there is a lack of official information on 1,092 other people. The arrests include high-profile lawyers and activists that were not involved in the protests, according to their lawyers.

Newly appointed Attorney General Hamada al-Sawy issued a statement on Thursday regarding the ongoing investigations into those detained in relation to last week’s protests. According to the statement, the public prosecution has questioned “no more than 1000 people” so far and ordered the seizure of security and surveillance cameras near the sites of the protests. They also ordered the inspection of defendants’ social media accounts.

The statement then noted that a number of foreigners were arrested in connection with the protests in Cairo, and added that public prosecution is continuing to investigate evidence and reports, so they “make decisions regarding the defendants, releasing those who put themselves in suspicious situations without intending to break the law and punishing those who committed crimes.”

Sawy then called on the citizens who want to protest to follow the legal procedures by submitting a request with the location, timing, occasion and number of participants in the protests, as well as the slogans that will be used.

Last week’s crackdown and expectations of further protests today led to international responses and criticism. Four US legislators —Bernie Sanders, Chris Murphy, Bob Menendez and Ro Khanna — tweeted their concerns about the use of force against Egyptian protestors. The Franco-Egyptian Initiative for Rights and Freedoms sent a letter to French President Emmanuel Macron demanding the French government to “take responsibility for the use of French weapons against protesters,” adding that a correspondent for French magazine Le Point said on September 22  that an “eyewitness saw French made armored vehicles used against peaceful protests” last Friday.

The German Federal Foreign Affairs Office issued a statement last Wednesday demanding that Egyptian authorities release the protesters who were arrested last week and have not been charged. The statement added that Germany stressed at the Human Rights Council in Geneva that: “the rising repression against civil society and free journalism will not contribute to Egypt’s stability. On the contrary, rising oppression will lead to radicalization and violence.”

UN human rights chief Michelle Bachelet issued a statement on  Friday in which she expressed “serious concerns” about the lack of due process following widespread arrests in Egypt. “All those arrested and detained solely for exercising their rights should be released immediately,” she said.

Topics
Related
protester arrests
Biggest wave of arrests since Sisi took office: 1909 people detained
Amnesty International demanded that the authorities allow protests to take place tomorrow
Armed Forces Engineering Authority
Money and image: Framing Mohamed Ali’s face off against Sisi
Leila Arman | Ali is a child of the post-2013 world, the world of naked conflict, stripped of any symbolism.
Karama Party
Lawyer Mahienour al-Massry arrested and Karama Party leader appears before Supreme State Security Prosecution after forced disappearance
“They’re arresting me. I am being taken away.”
Mohamed Ali videos
Demonstrations persist in Suez on Saturday as rights organizations continue to track arrests
So far, there has been no official response from the government or security agencies.