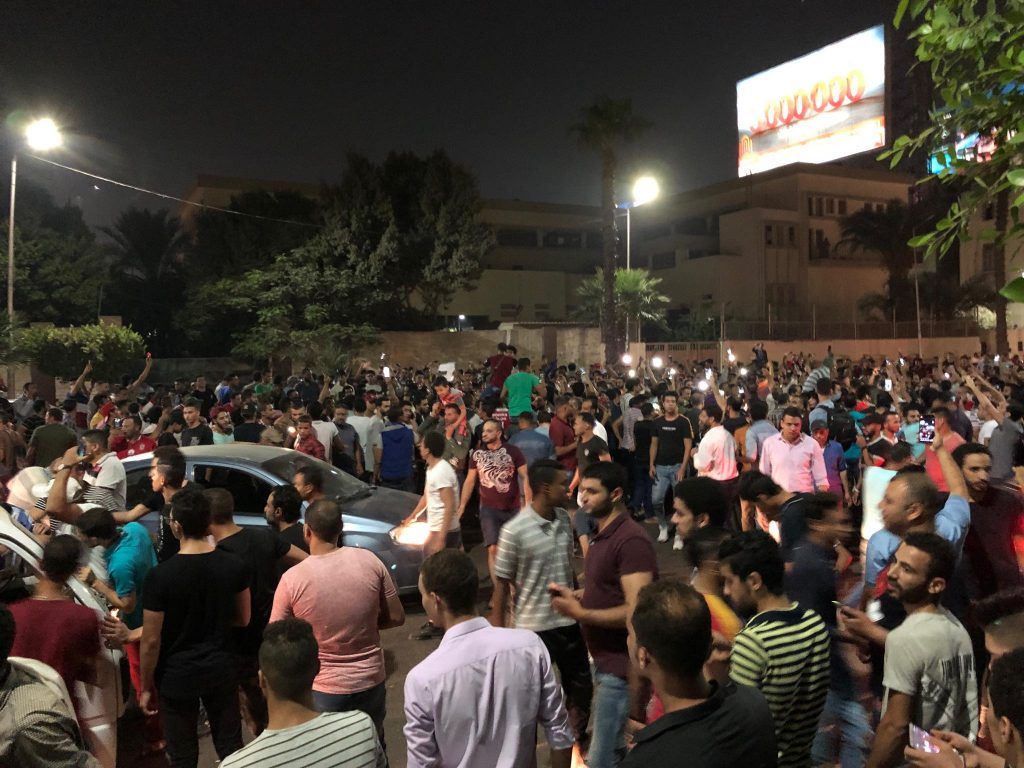 Protests broke out on Saturday night in Suez for the second day in a row. People in the port city gathered in al-Arbaeen Square, calling for President Abdel Fattah al-Sisi to leave office, according to eyewitnesses who spoke to Mada Masr. Security forces began using tear gas to disperse the crowd, but the number of protesters only grew larger, with demonstrations continuing until 6 am Sunday morning.

One source, speaking on condition of anonymity, said security forces carried birdshot rifles and drove armored vehicles, and were significantly more armed than they had been on Friday. Another witness in Suez, also speaking anonymously, told Mada there was a heavy security presence in the city today, adding that al-Arbaeen Square was closed to the public.

In Cairo, Tahrir Square and the surrounding downtown area have been heavily occupied by security forces, many of them in plainclothes, stopping and searching pedestrians at random.

While Friday saw protests in several cities including Cairo, Alexandria and Mahalla, Mada could only verify the reports coming from Suez on Saturday.

The Egyptian Center for Economic and Social Rights has documented the arrests of at least 274 people from different parts of the country after last Friday’s protests. As of Sunday afternoon, the center was still receiving reports of new arrests.

Mohamed Ali, the contractor currently based in Spain whose videos accusing Sisi of corruption went viral in the weeks before the protests began, released a new video on Saturday night in which he called for further massive rallies next Friday.

The websites of Al-Hurra, a US-based outlet, and BBC Arabic were partially blocked on a number of internet service providers on Sunday, according to independent tech researchers. Large numbers of people also reported having trouble using Facebook Messenger and Wire.

President Sisi is currently in New York for the United Nations General Assembly. State aligned media published pictures of dozens of Egyptians waving flags and posters of the president in the streets around the UN headquarters.

More than five years after demonstrations were totally banned, news of the protests that broke out across the country on Friday has gripped social media and unleashed debates about why they are happening now, and where they are headed. So far, there has been no official response from the government or security agencies.

Egypt’s State Information Service (SIS), the government body responsible for overseeing foreign media in Egypt, emailed foreign correspondents to tell them that it has carefully monitored their work over the past 24 hours and to warn them against spreading false information. The statement, also published on the SIS website, makes no explicit reference to the protests.

Most Egyptian daily newspapers have not mentioned the protests.

Topics
Related
protester arrests
Hundreds estimated arrested in country-wide protests, as political source describes confusion in president’s absence
In the absence of an official response to protests last night, lawyers have estimated that hundreds of
Mohamed Ali videos
Shoot, post and share: The viral accusations against Sisi and the military that led to Friday’s protests
Rana Mamdouh | Sisi’s mesh of endearing and threatening discourse might have only given his opponents a leg up.
protests
Scattered protests emerge in cities across Egypt Friday night
In Tahrir Square, dozens were trying to assemble, chanting The people want to bring down the regime
Mohamed Ali videos
Mohamed Ali fallout continues: Sisi mulls canceling New York trip amid high-level meetings to combat ‘destabilization campaign’
General Intelligence Service Chief Abbas Kamel believes that the move would send a negative message.