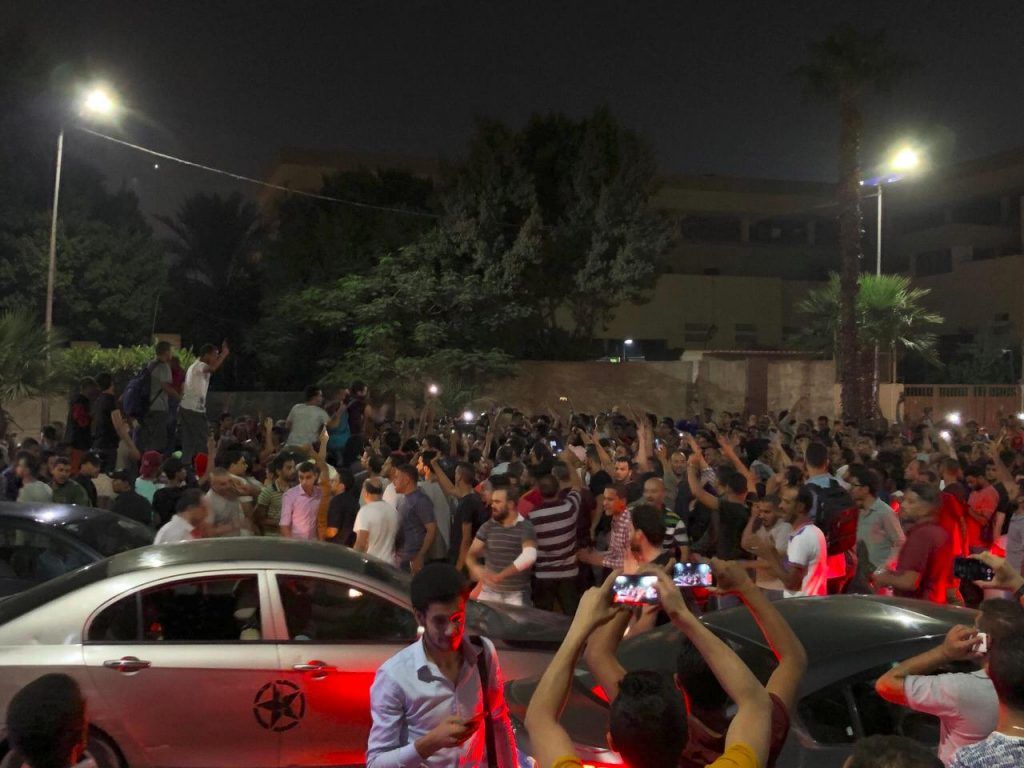 Scattered protests emerged in cities across Egypt on Friday. Here’s what we could verify:

Three of our journalists witnessed small-scale protests in Tahrir Square, where dozens were trying to assemble, chanting “The people want to bring down the regime.” During one of their attempts, riot police were seen arresting about 30 people and using tear gas. Riot police have closed some streets to all traffic, while police trucks have been driving frantically on the streets surrounding the square. Another journalist working with us saw a number of people in cars honking their horns in the Azbakeya area of central Cairo, chanting, “Down with Sisi.”

In Alexandria, an eyewitness saw about 20 to 30 protesters gather in the central Qaed Ibrahim area, chanting “The people want to bring down the regime” and “Leave, Sisi.” Shortly after they gathered, police dispersed the crowd, beating some protesters using batons. Some were dragged into microbuses belonging to the Ministry of Interior. Another protest took place in Raml Station, another central Alexandria neighborhood, according to a second eyewitness.

In Suez, an eyewitness told us that a small group gathered in al-Arbaeen Square, and chanted against the regime for half an hour. When numbers increased, police intervened to disperse the protesters, chasing after people as they fled.

In Mahalla, an eyewitness told Mada Masr that he saw dozens of protesters gather under the Reda Hafez Bridge, who were later dispersed by police. The area has regularly seen protests since 2008. The city, a major center of Egypt’s textile industry, has long been a site of large labor protests, even after the legal ban of all protests after the ouster of former President Mohamed Morsi.

Meanwhile, in a message posted on the official Facebook page of detained former Chief of Staff Sami Anan, titled “A message to the nation,” Anan reportedly supported the protests taking place in various cities and demanded that Egyptians stay in the streets until “the state is liberated from the head of the regime.” Anan urged his “sons in the Armed Forces” to protect the will of the Egyptian people and respond to their demands, steering away from “politics.” Anan is currently detained in the Maadi Military Hospital, according to government sources. He was arrested in January 2018 after he published a video announcing his intention to run in the 2018 presidential election. The army accused him of running for office without permission, which it said was a breach of military law. He was subsequently sentenced by a military court to 10 years in prison.

On the media front, most state-owned outlets ignored the protests. However, on his show al-Hekayah, pro-regime media figure Amr Adib showed some shots of protests around Tahrir Square and said that the protesters gathered and chanted for a couple of minutes and then sent videos. Adib said that most protesters were rounded up and that they were mobilized by the Muslim Brotherhood. On his Twitter feed, MP and media figure Mostafa Bakry, another regime ally, said: “Where are the patriotic, honorable voices? The war waged by the Muslim Brotherhood media is taking over and is trying to start a revolution and incite people to destroy their own houses. Why aren’t we learning our lessons?

President Abdel Fattah al-Sisi traveled to New York on Friday as scheduled, to take part in the 74th United Nations General Assembly. Government sources had told Mada Masr that the president was mulling adjusting or canceling his trip in light of the call for protests on Friday.

The calls for protests followed a series of videos over the last two weeks, in which Mohamed Ali, a contractor who worked with the Armed Forces on a number of projects, accused Sisi and the Armed Forces of squandering billions on vanity real estate projects. Ali, who is now in Spain, ended his series of online videos with a call for protests against Sisi’s rule. In his latest post, he called on Minister of Defense Mohamed Zaki to arrest Sisi and side with the protesters. He also threatened to personally return to Egypt on Friday.