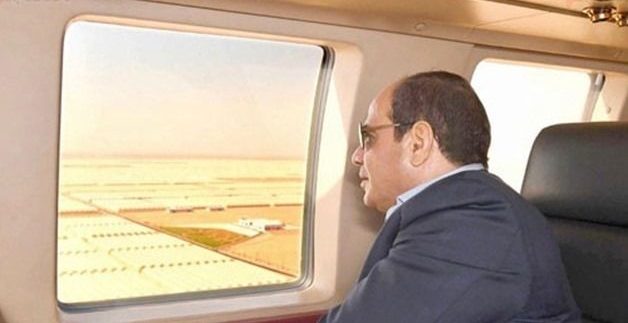 Continuing to face the fallout caused by a series of viral videos that allege state funds were used on vanity projects, President Abdel Fattah al-Sisi is considering canceling his trip to New York, scheduled for Saturday, for the United Nations General Assembly, or at least shortening his trip, which was planned to last a week, according to three government sources.

So far the president has not decided to cancel his trip, but Minister of Foreign Affairs Sameh Shoukry, who left for New York on Thursday to attend the preparation meetings for the assembly, was told before he left that he will head the Egyptian delegation in Sisi’s place, the sources told Mada Masr.

One of the sources said that there are discussions in the circles around Sisi about the potential implications of canceling the trip, adding that General Intelligence Service Chief Abbas Kamel believes that the move would send a negative message.

The possibility of canceling the trip to New York is the most recent episode in a series of developments stemming from accusations made by contractor Mohamed Ali against Sisi and the Armed Forces. Ali, who is now in Spain, published a series of videos on social media in which he accuses Sisi and the army of squandering billions on vanity real estate projects, including presidential palaces and a luxury hotel for the military intelligence in a Cairo suburb.

After the videos went viral, Sisi was prompted to respond directly in a hastily organized youth conference, which was held last Saturday.

Following the release of Mohamed Ali’s videos, a series of other videos were released accusing Sisi and the Armed Forces of corruption and demanding that he leave office, a demand that soon developed into calls for protests on Friday. The calls were popular on social networks in the past few days.

One of the government sources who spoke to Mada Masr said that the release of Mohamed Ali’s videos and their implications had caused anger in ruling circles.” This anger has been translated into punitive measures against intelligence-gathering personnel. Kamel called the intelligence official at the Egyptian diplomatic mission to Spain and criticized him, according to the source.

The source also said that Sisi held several high-level security and political meetings to discuss the recent developments in the country and review the media plan to combat what was described as “a systematic campaign that aims to undermine stability and threaten security.”

The president also met several military, intelligence and security leaders — in groups and individually — to make sure that “nobody will go to the streets” and that whoever considers doing so would be handled decisively, according to the source. Instructions have been handed down to officers in the Armed Forces and the police in order to boost the morale of their subordinates and to guarantee an action plan to mitigate any calls for protests early on.

The meetings also discussed the steps that the president can take in the next few days, especially if he decides not to head to New York, including a possible Cabinet reshuffle.

The sources believed that there were unlikely to be any serious developments on Friday, despite what they described as the increasingly charged tone of the videos as they progressed.

The sources refused to comment on a statement attributed to Sami Anan, the former Chief of the General Staff of the Armed Forces, calling for Armed Forces Chief of Staff and Minister of Defense Mohamed Zaki to stand by the people in removing what he described as a severe offense to the military’s reputation by the president.

Anan is currently serving a 10-year sentence in the Maadi Military Hospital, after he was convicted of violating military law after he announced his intention to run for president last year.

Topics
Related
Mohamed Ali videos
Sisi refutes contractor’s allegations that state funds were wasted on vanity projects at hastily organized youth conference
He accuses Sisi of wasting money on presidential palaces and the army of squandering billions
DMC
Sacking TV presenter Osama Kamal: How graduates of the Presidential Leadership Program manage Egypt’s TV channels
Ashraf Hakim | "There is no mistake. Ramy Radwan will present the show instead of you today and going forward."
diplomacy
Sisi approves diplomatic reshuffle after months-long delay
Fishere was told that he had “crossed all political red lines" prior to his termination.
cabinet
Sources: Egyptian intelligence issues order banning ministers from appearing on air until further notice
Ashraf Hakim | Current ministers will not be allowed to appear on air or conduct on-air phone interviews