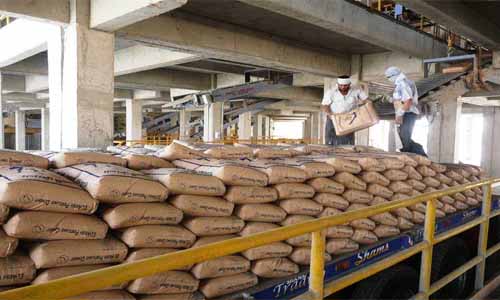 Egypt’s cement market was disrupted last year with the entry of the Armed Forces as a major new player in the industry.

In August 2018, the Arish Cement Company, which is owned by the military-run National Services Products Organization, launched the largest cement plant in the country in Beni Suef. The Armed Forces also announced the completion of two more production lines in the second phase of its existing factory in Arish.

The new plants have a whopping annual production capacity of 18 million tons, giving the military control over a fifth of Egypt’s cement market.

The new factories have added capacity to an industry that was already oversupplied and struggling. Average annual production in the cement sector jumped from 67 million tons to 85 million tons in 2019, according to an official in the Federation of Egyptian Industries, who spoke with Mada Masr on condition of anonymity. Yet current average demand for cement stands at just 53 million tons, widening an already massive gap between supply and demand.

The additional production capacity brought on by the military plants has forced cement companies to drop their prices. Cement makers have also been hurt by rising fuel prices as a result of government subsidy cuts, and by the flotation of the Egyptian pound nearly three years ago.

Those hardest hit by the sizeable entry of the Armed Forces into the cement industry appear to be public sector companies.

In October 2018, the general assembly of the long-struggling National Cement Company agreed to liquidate over continued financial losses and debts. This past July, El Nahda Cement Company announced it was partially suspending its main production line for six months after sales fell due to oversupply (Chemical Industries Holding Company owns a 50% stake in El Nahda, Misr Holding owns 20%, and Arab Contractors 30%).

In the private sector, Tourah Cement, a subsidiary of Germany’s HeidelbergCement, said in August it had suspended production because of financial distress caused by oversupply in the Egyptian market and was considering liquidation.

A recent report by the investment bank Pharos Holding found that total sales in the cement sector decreased by 3.3% during the first half of 2019 and that current market dynamics could force companies with a combined production capacity of up to 6 million tons out of the market in the next 12 months. The market demand for cement would need to increase by 47% in order for the sector’s dynamics to improve, according to the report, an unrealistic prospect in the short term.

Meanwhile, the export market does not provide a solution to issues of overcapacity.

“Talking about exports is meaningless, because neighboring markets also have a massive surplus,” the official at the Federation of Egyptian Industries tells Mada Masr. “It is difficult to resort to exports as an alternative to exiting the market.”

Saudi Arabia, for example, has an annual surplus of about 25 million tons, according to the source. The same issue of oversupply also exists in Turkey, Cyprus, Greece and Jordan.

“We are only left with Libya,” the Federation of Egyptian Industries source says. “ If political conditions stabilize and reconstruction begins then it could become a potential export market, but it would be a small one that wouldn’t be able to absorb excess Egyptian cement production if factories operate at full capacity.”

Even though Egyptian cement is the second cheapest in the world after Turkey, the export market cannot compensate for declining sales, rising costs, and overcapacity issues in Egypt, the source says.

Cement factories are now appealing to the government for help as they face higher risks of bankruptcy and closure. The complaints raised by the companies are mainly focused on declining sales and profitability compared to previous years.

In July, Prime Minister Mostafa Madbuly met with cement manufacturers to address the problems plaguing the industry. After the meeting, Madbuly pledged to formulate a special program to subsidize cement exports as well as to direct banks to reschedule corporate debts. Export subsidy programs for all exports are financed from the state budget with an allocation of about LE6 billion for the current fiscal year.

At the same time, the military’s move into the industry poses a burden on the state budget. Military business ventures are exempt from taxation and do not contribute revenue to the government budget. According to Article 47 of the 2005 income tax law, all corporations based in Egypt are mandated to pay income tax with the exception of projects run by the military-owned National Services Products Organization.

So even though the army now controls 20% of the cement market, the government will not earn any tax receipts from their profits. Meanwhile, the army may stand to benefit from any government export subsidy scheme for cement manufacturers.

Private sector companies did enjoy hefty profit margins that exceeded 50% in the six years leading up to 2016, according to a former cement company official who spoke to Mada Masr on condition of anonymity. This changed drastically after the flotation of the pound and continued cuts to energy subsidies.

The additional supply brought on by the military’s new plants forced companies to lower their prices by an average of 15% over the past year to a record LE810 per ton, down from LE900 per ton in 2018.

AD
You Might Have Missed
Carbon Colonies & A Green New Deal
What we talk about when we talk about trees
Where do old lesbians go to die?
Mugamma revisited: Reimagining the building and the square
AD
Omaima Ismail
8 articles on Mada