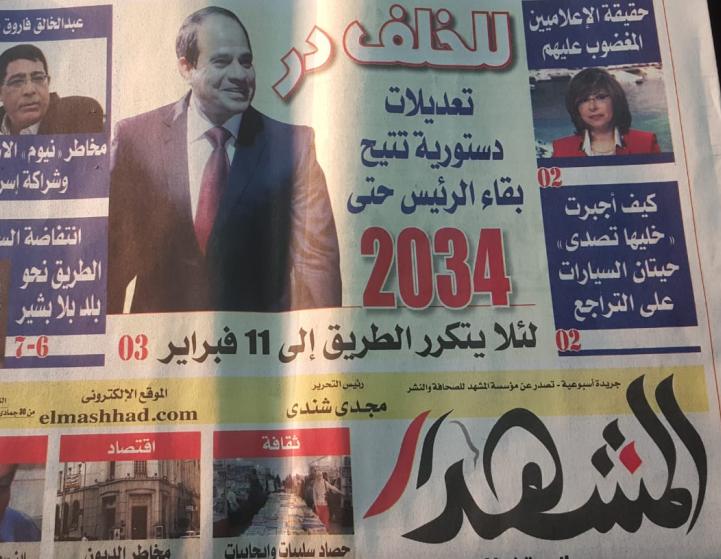 Police forces raided the home of journalist Magdy Shendy, editor-in-chief of Al-Mashhad newspaper, on Tuesday. While Shendy was not home at the time of the raid, police arrested his son, Omar, according to Amr Badr, a member of the Journalists Syndicate board.

During the police raid, Shendy’s family called him to alert him about what was happening, according to Badr. Shendy told them he was coming home immediately, yet police told the family they were detaining Shendy’s son and taking him to the Giza Security Directorate.

When Shendy went to the security directorate to inquire about his son, he was informed he had been taken to the headquarters of the National Security Agency in Sheikh Zayed, Badr said. Shendy contacted several security officials and senior colleagues at the Journalists Syndicate to try and find out what was happening, to no avail, according to lawyer Tariq al-Awadi.

On his Facebook page, Shendy wrote that he is ready to turn himself in at any moment but says he has no information of any case filed against him. “If someone wants me, I am not hiding,” Shendy wrote. “All it takes is a phone call from any government body and I will comply immediately. I don’t know what the reason was  to arrest my son.”

Shendy’s son is a student at Helwan University’s Faculty of Music Education. As a result of his detention, he missed a scheduled college entrance exam, which could affect his educational future, Badr said.

In a statement, the Arabic Network for Human Rights Information (ANHRI) blasted the arrest of Shendy’s son as a “serious violation of the law.” ANHRI called on “the Ministry of Interior to urgently release Magdy Shendy’s son, respect the Constitution, punish those responsible for the crime and apologize for the practices carried out by its officers.”

In its weekly issue, published on Monday morning, Al-Mashhad ran an article by former presidential candidate Hamdeen Sabbahi on the “Hope Coalition” case, which involves the arrest of a number of prominent political figures, as well as an article on the videos posted by Mohamed Ali, the contractor who did construction work with the Armed Forces and is accusing the military and President Abdel Fattah al-Sisi of corruption.

Al-Mashhad was the first newspaper to be sanctioned by the Supreme Media Regulatory Council (SMRC) under its new bylaws for media violations in March. The SMRC handed the newspaper a LE50,000 fine and ordered a block on its website for six months for a number of alleged violations, including violating public morals, insulting a public figure, publishing a pornographic image and more. At the time, Shendy denied the accusations and said the likely reason for the sanctions was the “newspaper’s stance regarding the constitutional amendments.”

Topics
Related
activist arrests
Prosecution takes up political line in interrogation of several Coalition for Hope defendants, hands down 15-day detention orders
Rana Mamdouh | Detainees have been questioned about their leftist political views after arrests on Tuesday
Journalists Syndicate
Security interventions place 3 pro-govt figures on Egypt’s Journalists Syndicate council
Ashraf Hakim | The security apparatuses sent a list of six nominees by WhatsApp to newsrooms
freedom of the press
Editor in chief: Al-Mashhad handed 1st penalties under new bylaws for report on police racketeering for amendment referendum
The first suspension and substantial fine was handed down to a media organization on Thursday
censorship
Journalists Syndicate board members walk out of meeting in protest over proposed SMRC bylaws
2 board members walked out in protest during a meeting over proposed media violation bylaws