اقرأها بالعربية
Have the IMF’s promises to Egyptians come true?

Almost three years have passed since Egypt sealed a deal with the International Monetary Fund, which ends this year. The last disbursement of the loan was recently approved as part of the IMF’s final review of Egypt’s implementation of the economic program agreed upon in the deal.

The agreement included clauses to raise growth rates, exports and foreign direct investments and to improve the business environment overall. The agreement also included increased spending on health and education and an enhanced social safety net for the poor through savings generated from cutting energy subsidies and wages and implementing the value added tax.

Egypt managed to fulfill the agreement specifically in terms of increasing growth rates, but on the other obligations, the state is either lagging behind, or has not been able to translate the achievements into the broader economic improvement that the IMF had promised.

The increase in Egypt’s growth rate has exceeded the IMF’s expectations, according to the IMF’s reports on its previous reviews, issued between fall 2017 and spring 2019. According to the state budget, GDP increased from 4.2% in fiscal year 2016/2017, the first year of the IMF agreement, to 5.6% in FY 2018/2019, and it is expected to reach 6% in the current fiscal year. The IMF had set its benchmarks at 3.5% and 6% for the medium term.

Throughout the agreement period, the IMF has promoted private sector-led growth, with the expectation that the loan would improve the business environment. But various assessments show that the years of the loan’s agreement haven’t quite served the private sector. The private sector’s share of the domestic credit was merely 23% in April 2019, according to the World Bank. This share is a drop from that recorded in September 2016 prior to the IMF agreement when it stood at 31 percent, as shown in the Central Bank data.

The loan agreement stipulated that the Central Bank of Egypt raise interest rates in an attempt to curb inflation after Egypt floated its currency, a move which was considered harmful to the private sector. The national bank raised interest rates by a total of 7% over several months before embarking on an easing cycle in February 2018, which raises fears that inflation rates might rise again. In its most recent Egypt Economic Monitor report, the World Bank stated that higher interest rates had put pressure on the private sector as the cost of borrowing increased.

Meanwhile, the Egyptian economy became more attractive to foreign direct investments, which increased from 2.1% in FY 2015/2016 to 3.4% the following fiscal year (before receding somewhat to 3.1% the year after), according to Central Bank data. The petroleum and gas sector alone attracted two thirds of these investments in FY 2017/2018, according to the World Bank report. The World Bank and other institutions are usually critical of high concentrations of investments in oil and gas, as it views such investments as less employment generative.

The IMF noted in its first review that the lower exchange rate for Egyptian currency that followed the floating of the pound was intended to improve the competitiveness of exports and curb imports. But the Egyptian government acknowledged in the documents published with the first review that non-oil exports are in crisis, as the share of non-oil goods exports was less than 6% of GDP. “We are reforming our export promotion regime to provide adequate support to small and new exporters,” read one of the government’s documents. The World Bank said recently that growth in non-oil exports remains weak despite the currency float. The World Bank report found that improvement in non-oil exports did not match the magnitude of the currency depreciation.

Total exports increased by 16.2% in FY 2016/2017, and again by 18.9% in FY 2017/2018, but the growth in non-oil exports was minimal in both years, indicating that the rise in exports was mainly driven by petroleum exports. The improvement in the trade deficit, which represents the difference between exports and imports, was attributed in the report to gas production from the Zohr gas field. This allowed for oil imports to drop significantly and for greater fuel independence, putting Egypt on the path to achieve a surplus in the petroleum trade for the first time in four years.

Oil and non-oil exports as a percentage of total exports 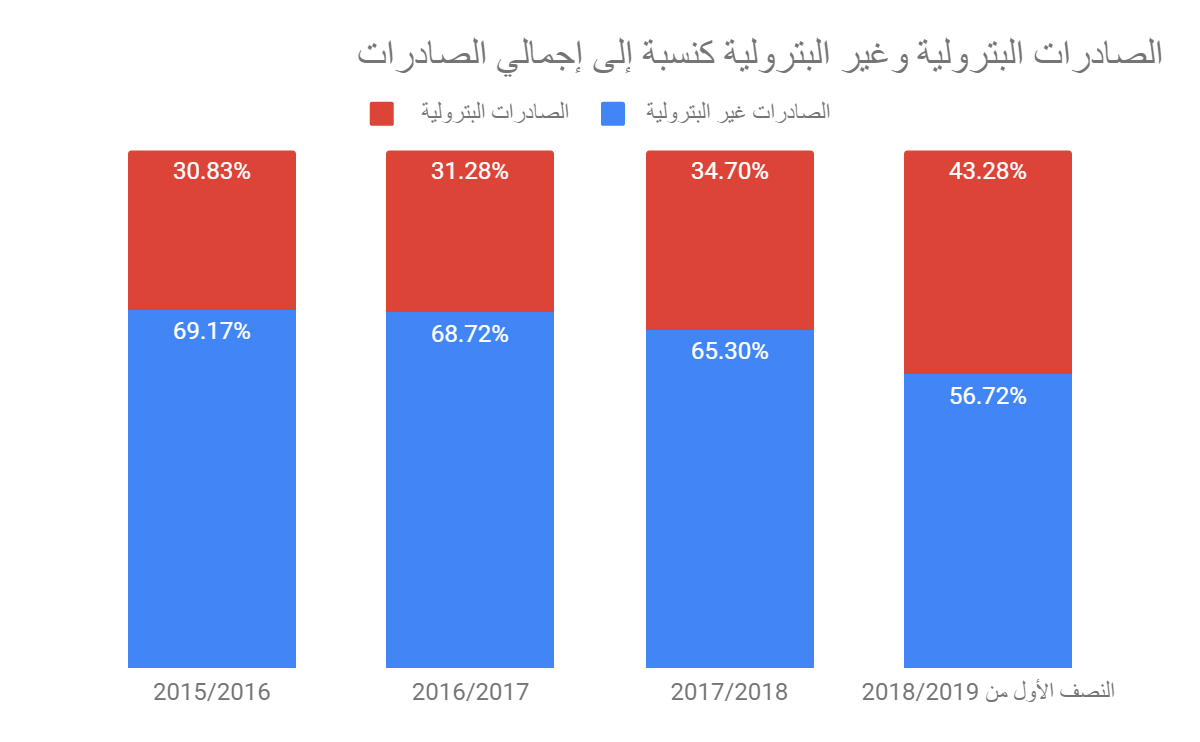 Egypt fell far short of IMF expectations concerning debt. External debt increased beyond the projections the IMF had outlined in its first review, which considered the size of the debt and its service, and the difference grew over the course of the program. In the first year, the difference was $3 billion, while in the second it was $18 billion. 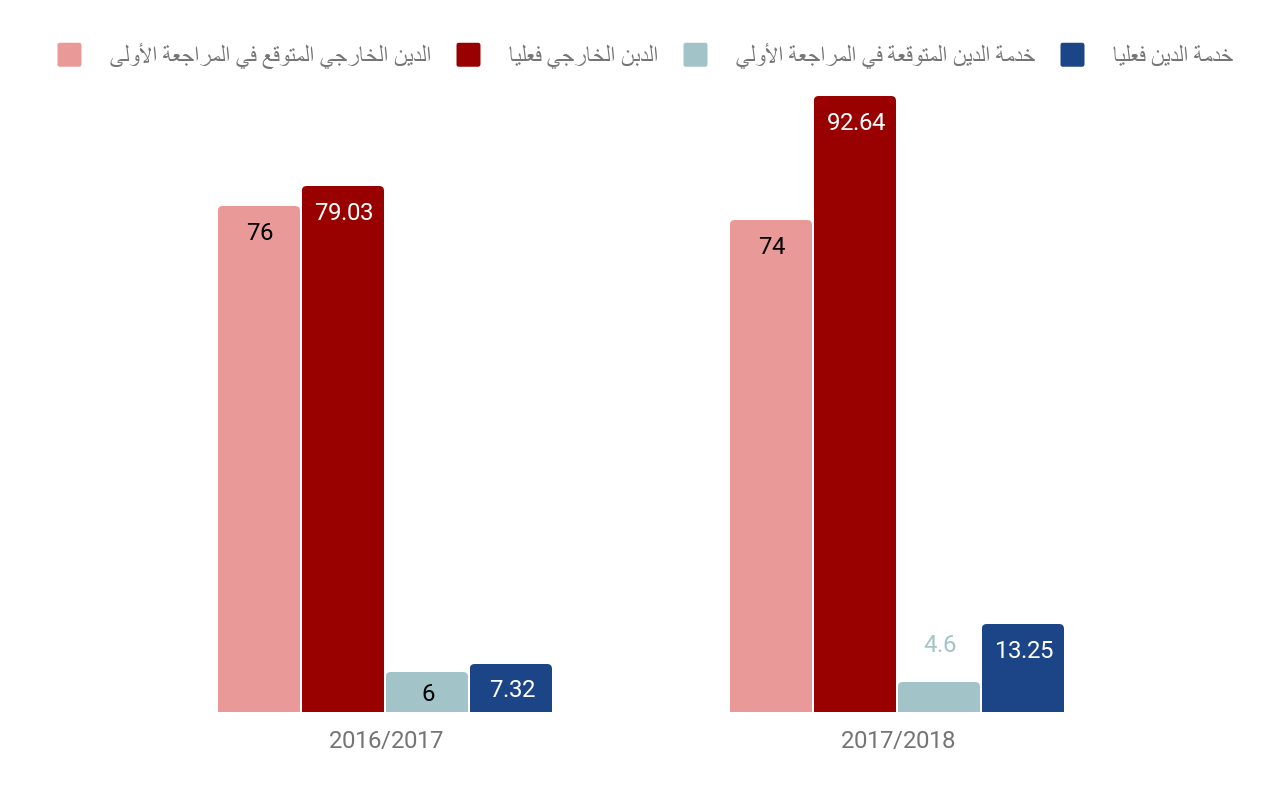 Social protection remains the ultimate point of contention in the overall IMF loan scheme for Egypt. Fundamental questions concerning the trickle down of growth rates and protection of disadvantaged Egyptians in the wake of austerity measures remain unanswered.

The IMF did not only promise growth, it also promised that “this [implementation of the government program] will help achieve inclusive, job-rich growth.” Inclusive growth, according to the World Bank’s simplified definition, refers to growth that is favorable to the poor — meaning growth from which the poor benefit, or growth that entails an increase in wages for the poor, reducing inequality.

While the IMF promised that the reduction in spending on energy subsidies would allow the government to raise social spending, especially on education and healthcare, what actually happened was that allocations on education (basic, higher and scientific research) and healthcare both fell as a percentage of GDP.

As part of the agreement, the government committed to raising spending on several social programs, the most important of which were the food subsidies, cash subsidies, pensions, and healthcare subsidies in FY 2017/2018. The following figure illustrates the total allocations for several aspects of social spending and the share of cash subsidies and pensions, health insurance, and food subsidies from GDP. 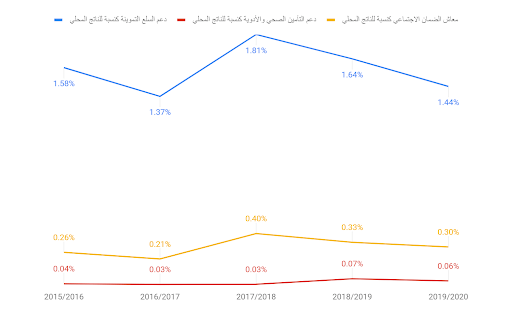 The above figure also shows that spending on food subsidies and cash subsidies, including pensions, as a percentage of the GDP, slightly increased in the fiscal year 2017/2018 before slowing again later on.

Changes in health insurance as a percentage of GDP were insignificant. In a previous report, Mada Masr compared the size of spending targets in comparison with the actual health spending. The report found that the government spent on health insurance only a third of what was allocated in the state budget for FY 2017/2018.

AD
You Might Have Missed
Mugamma revisited: Reimagining the building and the square
Where do old lesbians go to die?
Carbon Colonies & A Green New Deal
What we talk about when we talk about trees
AD
Beesan Kassab
47 articles on Mada

Topics
Related
energy and fuel subsidies
MP: New fuel pricing mechanism ‘rushed’ through to appease IMF on subsidy cuts
Beesan Kassab | The price of liquified petroleum gas cylinders has increased sevenfold since 2014
debt securities
The government wants to reduce its debt. Will its new strategy work?
Osman El Sharnoubi | The plan is to reduce short-term debt obligations and avoid paying billions in interest each year
Central Bank of Egypt
$2 billion dip in foreign currency reserves points to Egypt’s reliance on unsustainable investments
Beesan Kassab | The drop is a sign that the methods Egypt has used to prop up its reserves are unsustainable
IMF loan
2 years after the loan agreement: What the IMF failed to anticipate
Beesan Kassab | On November 11, 2016, the International Monetary Fund (IMF) and the Egyptian government finalized a US$12