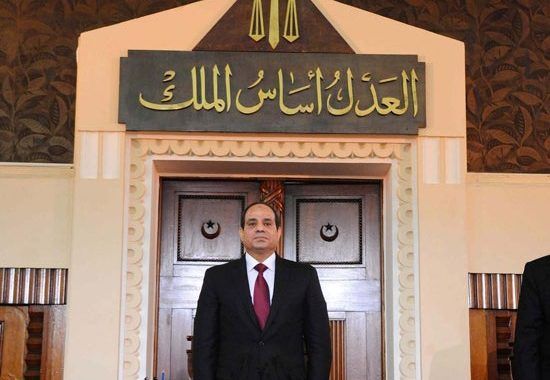 The day after a set of controversial constitutional amendments were approved in a national referendum in April, the Minister of Justice sent three laws to the heads of Egypt’s judicial bodies.

The first two bills regulate how the heads of the country’s top judicial bodies are selected — namely the Supreme Constitutional Court, the Administrative Prosecution Authority, the State Lawsuits Authority, the Court of Cassation, and the State Council — as well as the military judiciary.

The third law establishes a Council of Judicial Bodies, headed by the president and comprised of the heads of various judicial agencies, and also includes the head of the military judiciary.

Justice Minister Mohamed Hossam Abdel Rahim included a letter with the three bills addressed to the head of each body asking them to offer their opinion on the draft laws. According to a judicial source, at least one of the judicial heads responded, inquiring into the reasons for the military judiciary being included in the bills. The minister responded by saying that the laws are an implementation of Article 185 of the amended Constitution.

The first two laws were eventually ratified by President Abdel Fattah al-Sisi on June 26, while the third law to establish a Council of Judicial Bodies was postponed by Parliament, pending the selection of new judicial heads by the president.

According to a number of judges and legal experts who spoke to Mada Masr on condition of anonymity, the constitutional amendments and the ensuing legislation entrench the Armed Forces firmly within Egypt’s judicial system, bestowing more authority on what is already the most powerful actor in the country. The changes also greatly expand the application of military trials for civilians, essentially normalizing what was once an exceptional practice.

A deputy head of the State Council tells Mada Masr that the government surprised everyone when it used this ambiguity in the amended article to draft a law that includes the head of the military judiciary as a member of the Council of Judicial Bodies, a move that essentially deems the military judiciary a part of Egypt’s regular judicial apparatus.

The source says that the inclusion of the military judiciary within the Council of Judicial Bodies lays bare “the military’s desire to share the functions of the civil judiciary, in order to deter any possibility of judicial rulings that could impede their control.” The source adds that the speed at which the judicial laws were prepared following the constitutional amendments indicates the changes were one of the “main goals” of amending the Constitution.

A deputy head of the Court of Cassation describes the changes as a “violation of judicial principles” and says there is no way to assess the enormity of the implications of incorporating the military judiciary into the civil judicial system.

The Court of Cassation source says the changes to the status of the military judiciary are part of a broader effort to undermine judicial independence. The president now has greater powers over the selection of the heads of Egypt’s top judicial bodies and will also determine appointments, promotions and other judicial aspects as head of the Council of Judicial Bodies.

“What they want will happen and nobody will object. Whether it’s the incorporation of the military judiciary into the civil judiciary, or essentially granting the president veto power over all judicial affairs, from appointments to promotions to assignments and so on,” says the deputy head of the Court of Cassation.

The first moves toward bringing the military justice system under the umbrella of Egypt’s civil judiciary and expanding the military’s authority to try civilians came during the drafting of the 2012 constitution, according to one of the 10 legal experts who drafted the 2014 constitution.

While the Constituent Assembly ultimately denied the request, it did include language that defined the military judiciary as an independent judicial body, and for the first time permitted the military to try civilians “for crimes that harm the Armed Forces.” It also emphasized that members of the military judiciary are granted all the rights, obligations and guarantees of regular judicial authorities, as well as granting them independence and protection from dismissal.

Conversely, there were no suggestions to incorporate the military justice system into Egypt’s civil judiciary during the drafting of the 2014 constitution, nor was it a topic of discussion in the run-up to the constitutional amendments earlier this year, according to the legal expert. It also did not come up in 2007, when former President Hosni Mubarak amended the military judiciary law.

In 2007, Mubarak issued a decree that changed the name of the “military rulings” law to the “military judiciary” law,  referring to it as an independent judicial body for the first time. In 2008, Mubarak issued another law to establish the Council of Judicial Bodies, a predecessor to the council formed under this year’s constitutional amendments, although the military judiciary was not included in it.

According to the legal expert, during the drafting process of the 2014 constitution, of which he was a part, there was a general inclination to remove the “military judiciary” as a definition from the constitution, as well as its authority to try civilians, and instead stipulate that the law should regulate the jurisdiction of the military justice system.

Ultimately, however, these provisions were kept in — on the one hand, to pay tribute to the military for its role after June 30, 2013, the legal expert says, and on the other to “reassure” defendants on military trial that the process is constitutional.

However, not everyone sees the normalization of the military justice system as a problem.

Awady believes that the dangers faced by the country in the current moment requires giving the Armed Forces all the powers they need, saying the military is the only force capable of achieving the best interests of the state and deterring any aggressors. He also says that the military has no interest in putting civilians on trial in the first place, referring to a request made in 2012 by the head of the military judiciary to Parliament to remove an article that gave the president the right to refer any crime to a military court during a state of emergency.

Meanwhile, another deputy head of the Defense and National Security Committee in Parliament, Lieutenant Yehia Kedwany,  refused to respond to Mada Masr’s question on who the current head of the military judiciary is or when will he complete his term. Kedwany stresses that the Armed Forces have their own system and rules and that only they can give statements on these issues, adding that it is “not desirable” for any entity to speak about the military.

The constitutional amendments expanded the military’s authority to try civilians in a number of ways. Article 204, which specifies instances for which civilians can be tried in military courts, includes “crimes that constitute a direct attack on military installations.” In the amendments, the word “direct” was removed, a small but significant change. A deputy head of the Constitutional Court tells Mada Masr that removing the word “direct” allows for vastly broader interpretations of cases where civilians can be put on military trial.

A provision was also added to Article 204 that allows for the military trial of civilians if they assault “a building under the protection of the Armed Forces.” The additional provision expands the types of crimes civilians can be tried in military courts for and enshrines it in the constitution.

The military began sharing a number of police duties with the Interior Ministry in January 2011, after police forces withdrew from the streets in the face of mass protests and when the Supreme Council of the Armed Forces took charge of the country following Mubarak’s ouster. Those duties include the protection and security of various public buildings and government installations, including gas stations, electricity transmission towers, gas pipelines, petroleum fields, the railway system, roads, bridges, and more.

The head of an administrative court puts it more bluntly: “The independence of the judiciary has ended.”

AD
You Might Have Missed
Where do old lesbians go to die?
Carbon Colonies & A Green New Deal
Mugamma revisited: Reimagining the building and the square
What we talk about when we talk about trees
AD
Rana Mamdouh
71 articles on Mada