22 killed and dozens injured in an explosion at the National Cancer Institute in downtown Cairo, Egypt on the evening of Sunday August 4, 2019. - Photograph: Mohamed El Raai
By
Mada Masr

At least 20 people were killed and 47 wounded in a powerful blast in central Cairo on Sunday night after a car loaded with explosives blew up in front of the National Cancer Institute, according to the Interior Ministry.

In its initial statement early Monday morning, the Interior Ministry said the blast occurred after a car driving the wrong way hit three other cars along the Nile Corniche road but made no mention of explosives of any kind. According to a source within Egyptian state TV, security agencies issued strict instructions to broadcast outlets via a WhatsApp group on how to report on the incident, ordering them to only rely on official accounts, which in the hours after the attack contained little information.

In a second statement 12 hours later on Monday afternoon, the Interior Ministry said its preliminary investigation indicates that the militant group Hassm was behind the attack. It said the group was planning on conducting a terrorist attack in another location using a car laden with explosives when it crashed into three other cars in front of the National Cancer Institute and blew up.

A video released by the Interior Ministry shows a car moving slowly in the opposite direction of incoming traffic along the Nile Corniche road. Soon after the car passes out of the frame, at 11:37 pm, a large explosion fills the screen.

On his official Twitter account, President Abdel Fattah al-Sisi expressed his condolences for the victims in what he described as a “cowardly terrorist incident.”

Hassm denied any responsibility for the attack in a statement published online several hours later. The group expressed its condolences for the victims and stated that it focusses its attacks solely on the regime and not on “innocent civilians.”

Eyewitnesses who spoke to Mada Masr said that they did not see the moment of the explosion or the alleged accident, but confirmed that a car had exploded in front of the institute and saw other cars ablaze.

A staff member at the institute told Mada Masr that she saw two microbuses, apparently part of a wedding procession, in flames in front of the building and the passengers inside burning to death.

Paramedics quoted in al-Shorouk newspaper also claimed that most of the casualties were part of the wedding procession and visitors waiting in front of the institute. 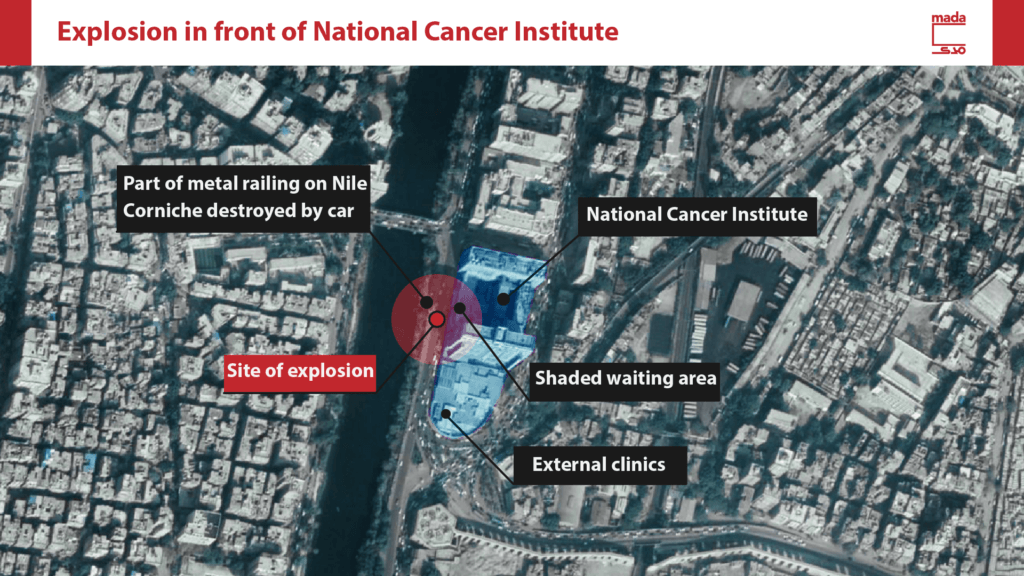 Those wounded in the attack have been transferred to the Nasser Institute, Qasr al-Aini, and El Mounira General Hospital for treatment of injuries including fractures and burns of varying degrees, according to the Health Ministry.

A nurse at the institute told Mada Masr that staff began to evacuate patients from the institute moments after the explosion, which shattered the building’s windows and damaged parts of the ceiling inside. The aluminium facade of one of the buildings collapsed as did parts of the main entrance, with debris strewn on the ground floor. A small crater was visible immediately in front of the damaged building.

All 78 patients who were receiving treatment inside the cancer institute have been transferred to nearby hospitals, including Nasser Institute, Dar al-Salam, and El Mounira General Hospital, according to the Health Ministry.

“There was dust everywhere, and the fire continued in front of the building, so we decided to evacuate the patients immediately without waiting for instructions,” the nurse said.

Operations and check-ups are postponed inside the destroyed buildings until after the Eid holidays, according to nursing staff. Yet the President of Cairo University, Mohamed Osman al-Khosht, said the undamaged facilities will continue to operate as normal. 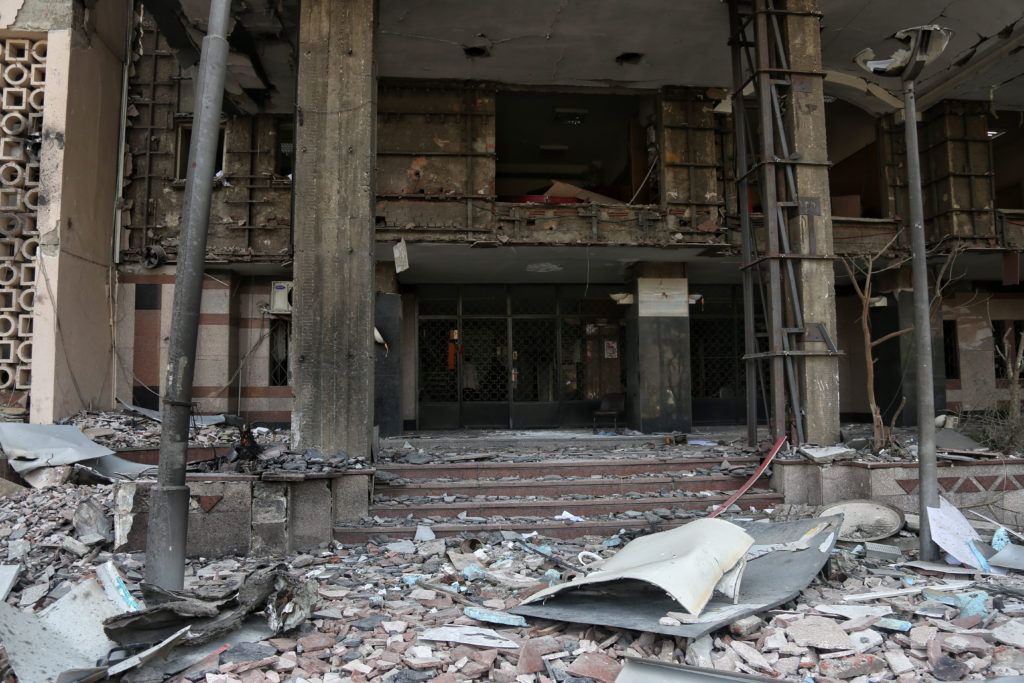 Immediately following the incident, many turned to social media for news updates, particularly as television outlets delayed reporting on the attack until they received instructions from security agencies on how to cover the news.

The first message came immediately after the explosion and instructed the media outlets not to report on anything related to the incident and to wait for a forthcoming statement by the Ministry of Interior.

Nearly an hour later, Egyptian state TV broadcast a breaking news story stating that “A fire ignited after a loud noise near the National Cancer Institute.” That report was based on a second message sent to the WhatsApp group. The source said security agencies included a note reminding media outlets not to publish any information concerning the incident except in coordination with the group.

Cairo University, which runs the National Cancer Institute, issued the first statement of any kind about the incident, denying that the explosion came from within the facility. “Initial information indicates that the explosion occurred outside the institute as a result of a car crash involving multiple vehicles,” the statement said.

The third message concerned the Minister of Health Hala Zayed’s visit to the Nasser Institute to check on the wounded who had been transferred there and her comments announcing the arrival of 25 ambulances to transfer the remaining victims from the site of the explosion. In the message, security agencies also warned against publishing any photos of the wounded, which state television appeared to comply within its broadcast.

State television then broadcast the Interior Ministry’s initial brief statement at 1:30 am, according to a security source.

At approximately 9 am, security agencies sent the fourth message to the WhatsApp group instructing media outlets to cease reporting on any statements made by ministers or any government officials until further instruction.

Egyptian TV outlets appeared to comply with the instructions in their coverage and only initially reported on the separate statements made by the ministries of health and interior. Coverage on private television networks was largely the same, with Extra News reporting the ministry statements at the exact same time as state TV.

In contrast, the Saudi-owned channel MBC Masr reported on the incident before Egyptian outlets. On his show, “Al-Hekaya,” host Amr Adib began reporting on the incident around midnight. He referred to online coverage in the newspapers Al Masry Al Youm and Al Fagr and broadcast photos published by eyewitnesses on social media. Adib initially reported on “the explosion of an oxygen tank at the National Cancer Institute.” This was followed by a statement by the head of the institute denying the explosion had occurred inside the facility and instead claiming it had been the result of a car collision.

State television in Egypt then broadcast the statement from Cairo University with the same details, followed by the Health Minister’s visit to the site, and finally the Interior Ministry report. Official statements were then covered in a similar fashion by most news channels.