In her debut graphic novel Shubeik Lubeik (2018), young graphic novelist Deena Mohamed Yehia (1994) draws a parable that evokes a fantastical present-day Cairo where the dreams and wishes of the populace are commodified, sold in bottles at supermarkets and local convenience stores. Purchased and traded by the rich, the wishes symbolize the city’s hierarchical class and power structure: the expensive wishes are purchased by the rich, while the poor slumber in their opiate daydreams, getting by on superstitions and unanswered prayers from day to day. The only wishes the working classes can afford are the very lowest tier, dubbed the “De Lesseps Wishes,” deceptive and unreliable like their namesake: French architect Ferdinand de Lesseps, who in 1854 convinced Yehia Said Pasha to sign a concession authorizing him to develop the Suez Canal, granting ownership of the founding company to France for 99 years.

Yehia initially published Shubeik Lubeik at her own expense during the 2017 CairoComix Festival, where it was awarded the Grand Prize for Best Graphic Novel. She later added twenty pages to her novel, which was re-released by Dar al-Mahrosa in time for the 2018 edition of the same festival.

Shubeik Lubeik is chiefly a political graphic novel, the nod to the French architect being one of many loaded references. Poor Egyptians are made to believe their wishes will be fulfilled, that they will have access to a better life outside the slums, and so they keep buying the cheap De Lesseps wishes, which end up backfiring in their faces. Yehia’s protagonist, Aziza, is one of those underprivileged individuals; a veiled, obstinate woman who lives with her husband, Abdo. Every time Abdo — who dreams of owning a Mercedes — buys a De Lesseps wish, he rounds up their neighbors to witness his attempts at making it come true. He positions the can that contains the wish in the middle of the street, backs away and begins formulating his wish as articulately as possible. The process culminates in chaos every single time. In one scene, after numerous failed trials, Abdo carefully utters his wish, then raises his arms imploringly to the sky, as if an additional prayer to spur the fulfillment of his wish could not hurt. 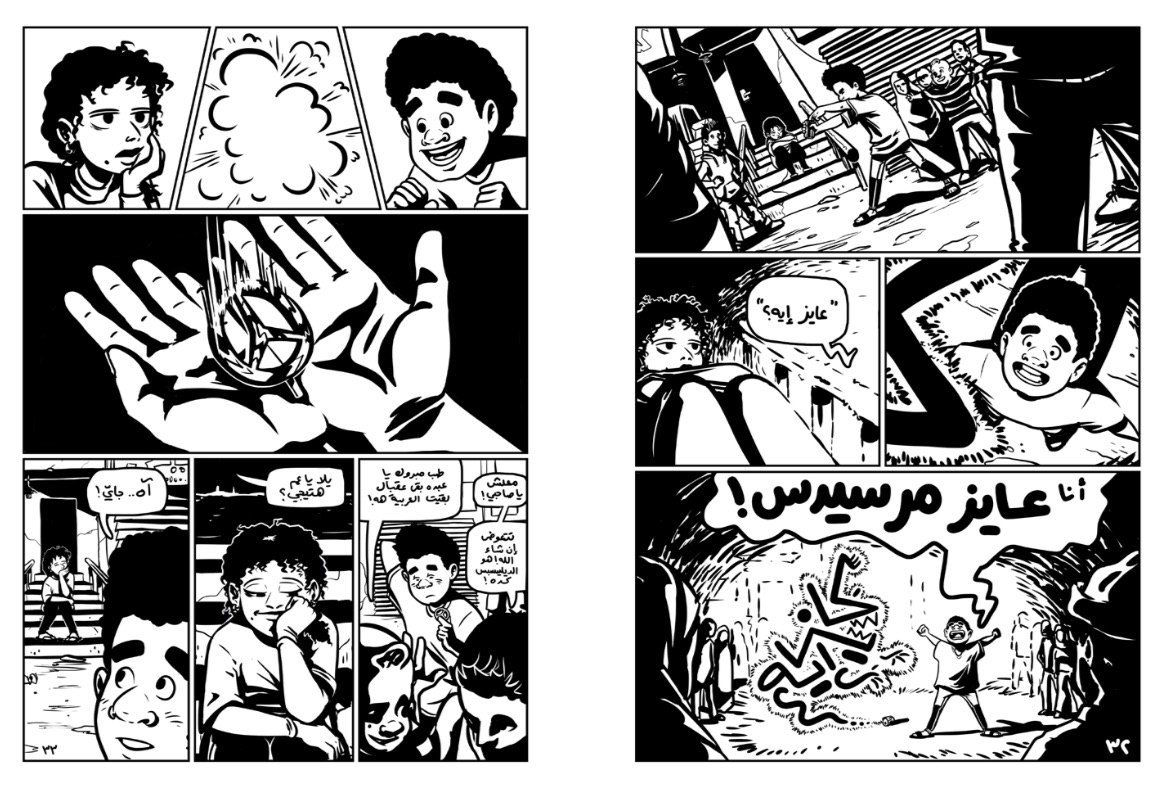 Aziza, meanwhile, is not content with such a feeble existence, and she doesn’t shy away from jeopardizing her safety to pursue what she believes are her essential rights. After she toils for four years to afford a powerful wish destined for the rich, a police officer accuses her of theft and imprisons her, in an attempt to preserve the stilted status quo. In a way, the wishes in Yehia’s novel could be equated with the ideals of January 25: a dream chased by revolutionaries, only to dissipate when they’re on the verge of catching it, just like the De Lesseps wishes.

Yehia deliberately omits the genie aspect of wish fulfilment to ground the novel in a carefully structured realistic dystopia. In some scenes, Shubeik Lubeik is reminiscent of Franz Kafka’s parable Before the Law (1915), where the protagonist confronts an unjust bureaucratic system that denies him access to a better life. However, with its large doses of Egyptian humor, it also calls to mind other graphic novels that employ satire to tackle the subject of political tyranny, such as Marjane Satrapi’s Persepolis (2000) or Riyad Sattouf’s The Arab of the Future (2014). 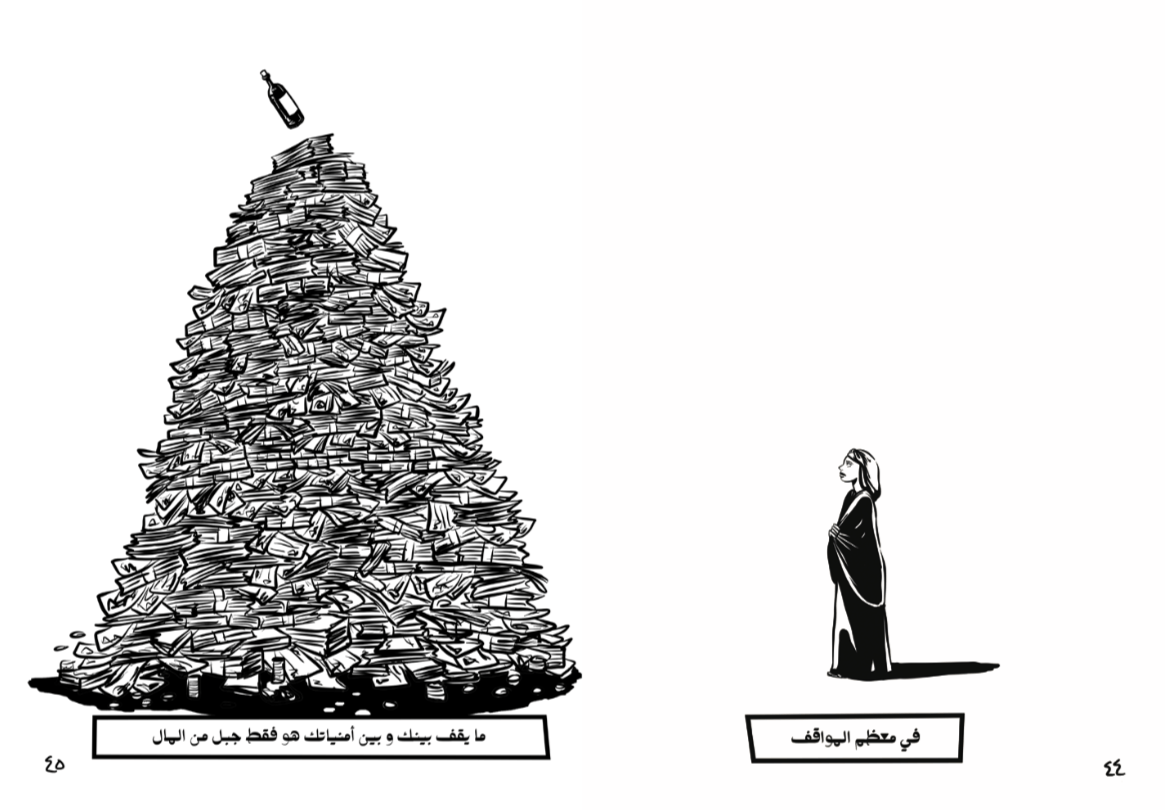 In addition to Abdo’s multiple fumblings with the wishes he buys, the novel is abundant with humor. On their wedding night, Aziza discovers markings all over Abdo’s body, which she realizes he’d used as a cheat-sheet to help him pass the preparatory school exams as a child. He’d used a De Lesseps wish before the exam, and as usual something went wrong, and the cheat-sheet became glued to his back like a tattoo. The characters are also constantly coming across laughable statements in newspapers — the president ponders whether wishes could liberate Palestine, while the mufti debates whether wishes are halal or haram.

Yehia’s illustrations are funny and simple, emphasizing movement and facial expressions. In one strip, we see a series of slightly modified versions of Aziza’s face in a sensitive depiction of her thought process. Unlike other Egyptian graphic novels, chief amongst them Magdy al-Shafei’s Metro (2008), Yehia does not strive to simulate real places or streets; she focuses more on character than setting. A skilful visual storyteller, there is always a constant rhythmic movement to her characters. In a conversation Aziza has with a cellmate in prison, Yehia presents five different drawings of the woman talking, from different angles. In two of them, she only captures portions of the woman’s face, to highlight that the guards can’t see her. In many other drawings without dialogue, Aziza’s countenance and body language speak for themselves. 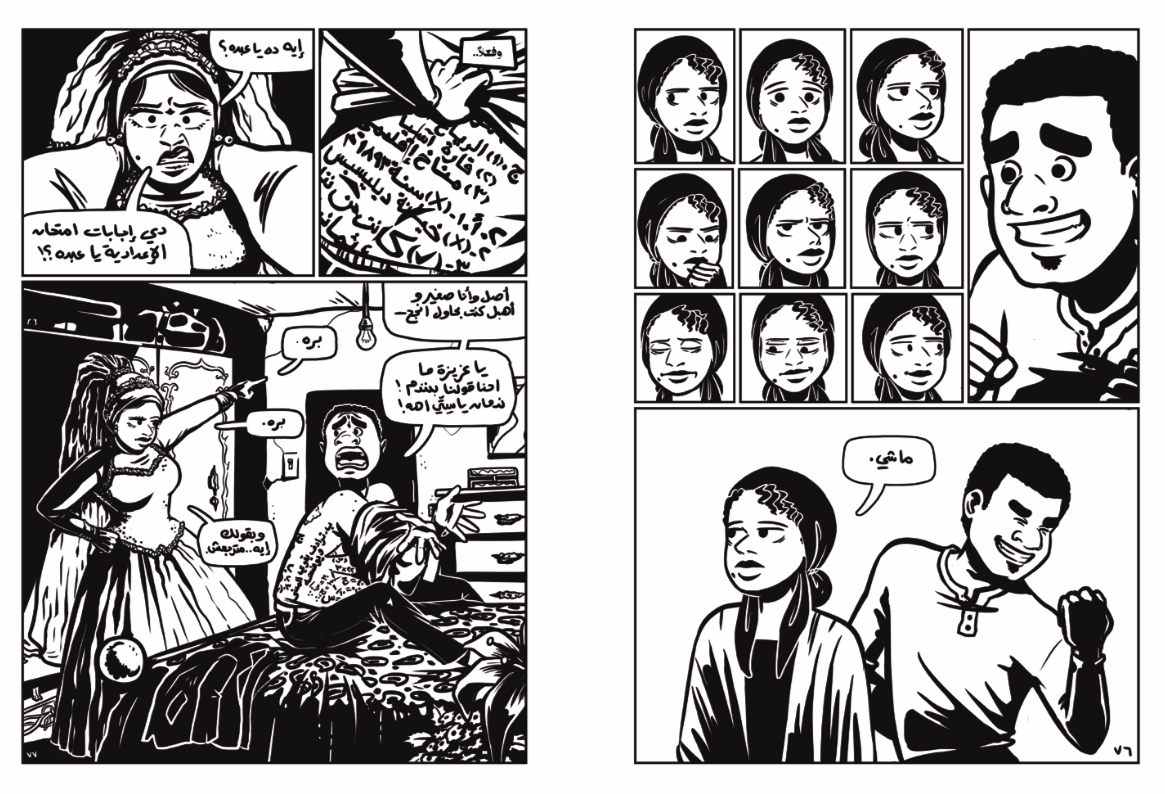 Shubeik Lubeik also shares some tropes with Vera Brosgol’s Anya’s Ghost (2011), which follows a Russian-American student struggling to integrate in an American school and society with the aid of a mysterious ghost. Yehia’s and Brosgol’s heroines are both young and socially suppressed girls who must deal with supernatural powers in order to fulfill their long-desired wishes, and both young artists even share similar drawing techniques. Yet whereas Russian-born Brosgol’s characters gradually deepen and darken, Yehia’s Aziza remains one-dimensional — unscathed by the paradoxical range of human emotions she goes through. One can’t help but feel that Yehia’s focus on the allegorical aspect of the work, with its underlying themes of imprisonment and human rights and the powerful political statement behind it, has come at the expense of the development of her characters and their personal narrative arcs. It might be an intentional attempt at a certain Kafkaesque-ness on the author’s part — as Kafka’s characters, too, never truly come to life; it’s the atmospherics and powerful symbolism that make his works great — yet I would have loved for Aziza to let go of her idealism at a certain point, so the reader can empathize more with her character.

Despite its minor flaws, however, Shubeik Lubeik is a significant contribution to the steadily growing repertoire of Egyptian graphic novels, particularly for its bold experimentation with the fantasy genre, political metaphors, and Yehia’s distinct drawing style.

AD
You Might Have Missed
Where do old lesbians go to die?
Mugamma revisited: Reimagining the building and the square
Carbon Colonies & A Green New Deal
What we talk about when we talk about trees
AD
Sherif Abdel Samad
21 articles on Mada