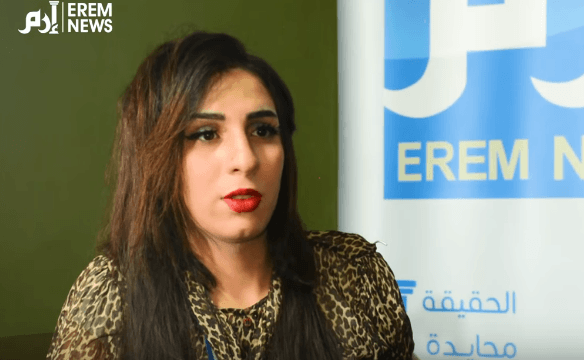 Malak al-Kashif in an interview with Erem News in 2018

Malak al-Kashif and Hossam Ahmed were arrested alongside over 70 others in an ongoing arrest campaign sparked by social media users’ criticism of the government and calls for protests in the aftermath of the train crash that left 22 dead and 43 others injured.

Kashif, 19, is being held in solitary confinement in the Giza Governorate’s Haram Police Station, pending investigations into charges of joining an illegal organization and using social media to disturb public order, according to Egyptian Commission for Rights and Freedoms lawyer Amr Mohamed.

Ahmed, who is being held in a women’s facility in the Abdeen Police Station and faces the same charges as Kashif, has faced harassment and bullying from other inmates and visitors. He has also been denied hormone therapy by Egyptian authorities since his arrest, according to lawyer Mohamed Eissa.

Eissa submitted a request to the prosecutor general on Thursday to transfer Ahmed to a “more appropriate” facility.

Kashif was arrested on March 6 in a sting operation, held in a National Security Agency facility overnight, and then appeared before the Supreme State Security Prosecution, who ordered her to be detained for 15 days.

Reports of her arrest were widely circulated on social media, with users drawing attention to the fact that her detention may leave her vulnerable to serious abuse at the hands of Egyptian authorities and other inmates, including the potential for harassment, assault and rape.

These threats are exacerbated by the fact that Kashif’s official documents, including her national ID, identify her as “male,” despite what social media users say have been sustained efforts to change her documentation. As such, it is likely that she will be held in male detention facilities, a number of social media users pointed out.

Ahmed, who was visiting Cairo from the Daqahilya Governorate city of Mansoura, was arrested by security forces from a downtown Cairo coffee shop on February 27 — the same day as the deadly train crash — alongside two other people, who have since been released.

Ahmed’s whereabouts were unknown for four days following his arrest, until he appeared before the State Security Prosecution on March 4, when he was issued a 15-day detention order pending investigations.

Last week, lawyer Ragia Omran, Mohamed and lawyer Azza Soliman met with the head of the Supreme State Security Prosecution to discuss Kashif and Ahmed’s arrests and submitted a request for their places of detention to be disclosed.

Omran previously told Mada Masr that lawyers have requested Kashif’s immediate release in order for her to be able to continue medical treatment for severe injuries she sustained following a suicide attempt in the summer of 2018.

Kashif and Ahmed have been added to Case 1739/2018, which includes at least 35 people who have been arrested over the past week and are being held pending investigations into charges of joining an illegal organization and using social media to commit a criminal act. The case also includes six members of political parties who were arrested in January after attending a ceremony commemorating the anniversary of the 2011 revolution.

In an ongoing arrest campaign that started on February 27, at least 70 people have been arrested across Egypt — mainly in Cairo and Alexandria — for alleged involvement in small-scale anti-government demonstrations in the aftermath of a train crash in Cairo’s Ramses Station that killed 22 people on February 27.

While social media users criticized the government’s lack of investment in railway infrastructure and called for protests following the crash, Mada Masr has not been able to document any protests since last week’s deadly accident.

Many of those detained have been apprehended in public spaces in Egypt’s two largest cities, in areas where security forces had been deployed to prevent protests. Several people have also been arrested from their homes.

The majority of those who have been detained as part of Case 1739/2018 are under 20 years old and do not have any history of political activism, lawyers previously told Mada Masr.