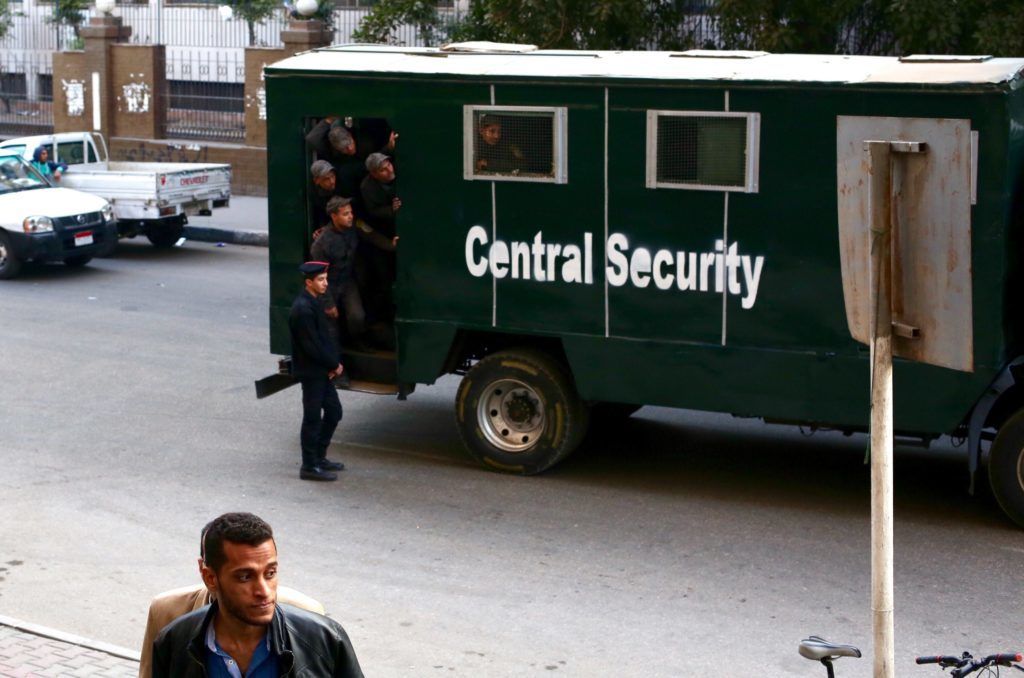 Four members of the Dostour Party are missing after being arrested on Friday, according to their lawyers and the party’s former president.

Authorities have not acknowledged the arrests or stated where the four members are being held, and therefore official charges are pending. However, lawyers and party members told Mada Masr that they believe the arrest to be connected to opposition to constitutional amendments that could extend President Abdel Fattah’s time in office and consolidate the military’s role in politics.

The arrests began at dawn on Friday, when security forces arrested pharmacist and Dostour Party member Helal Samir, from his house in Cairo’s Amiriya neighborhood, according to his lawyer, Ali al-Halawany. Security forces, which Halawany believes were from the National Security Agency, transported Samir to Amiriya police station but later denied that he was being held in custody there, Halawany told Mada Masr.

On the same morning, security forces arrested Gamal Fadel, a physics teacher and party member, from his house in the Aswan governorate town of Kom Ombo, according to Hisham Mubarak Law Center lawyer Mustafa al-Hassan. Hassan said that he submitted a legal complaint on Saturday stating that the NSA had arrested and detained Fadel without notifying his family or lawyers.

The two lawyers told Mada Masr that they believe the arrest of Samir, 25, and Fadel, who is over 50, is related to two videos they posted on social media rejecting the recent constitutional amendments.

In a report published in December, Mada Masr spoke to sources in the president’s office, the General Intelligence Service (GIS) and Parliament who documented coordination to extend Sisi’s stay in office via amendments to the Constitution, which included plans to deal with opposition to the potential changes. Security sources had conveyed to a senior political party leader, who spoke to Mada Masr at the time, that the security apparatus would not tolerate dissent on any scale regarding the amendments.

The reason behind the arrests of the other two party members remains unclear.

Ahmed al-Rassam, the party’s media officer, and Ramadan Abu Zeid, a senior party member from the Minya governorate, were arrested on Friday evening, after they attended a meeting at the Dostour Party’s headquarters in the Giza governorate neighborhood of Dokki, according to Khaled Dawoud, the party’s former president.

For the party’s former president, the arrests of the four Dostour members is tied to the party’s backing of a February petition “categorically” opposing the constitutional amendments that was also signed by political parties, public figures and members of the committee that drafted the 2014 Constitution.

“The citizens of Egypt who sign this statement believe that the essence of the proposed constitutional amendment process is to enable the current president to continue ruling for more than two presidential terms, in violation of the current Constitution, concentrating all powers in his hands and tightening the executive power’s grip on all judicial bodies, which means eliminating any possibility of peaceful transfer of power and freezing the project to build a modern democratic civil state,” the petition states.

Earlier in February, a number of public figures and political parties, including the Dostour Party, announced the establishment of a group to oppose the proposed changes. The group, which is called the Union to Defend the Constitution, aims to act as a “popular democratic framework that will address the task of protecting the Constitution and defending it via all possible, peaceful means,” according to a statement issued by former presidential candidate Hamdeen Sabbahi, one of the group’s founding members.

Those in Parliament have also faced blowback due to opposition to the proposed amendments. Samir Sabry, a lawyer who claims to have filed over 2,700 public interest cases in his 40-year career, filed lawsuits to strip MPs Haitham al-Hariri and Khaled Youssef of their membership in Parliament, over alleged sexual misconduct and breach in morality. Both Hariri and Youssef have announced their opposition to the constitutional amendments.

Youssef was embroiled in controversy at the close of January when video was leaked to state media showing him engaged in sexual activities. The MP and filmmaker claimed that the leak is tied to his opposition to the amendments.

Despite the opposition, Egypt’s House of Representatives continues to move forward with the procedures to approve the amendments. In mid-February, MPs overwhelmingly voted to approve, in principle, the amendments that would allow Sisi to extend his term in office until 2034, re-introduce an upper house of Parliament that was plagued by corruption when it was in session, and change articles relating to the legislature, the judiciary, the media and the Armed Forces.

The amendments were approved by 485 out of 596 lawmakers, with 16 voting against, one MP abstaining, and another withdrawing from the voting session.