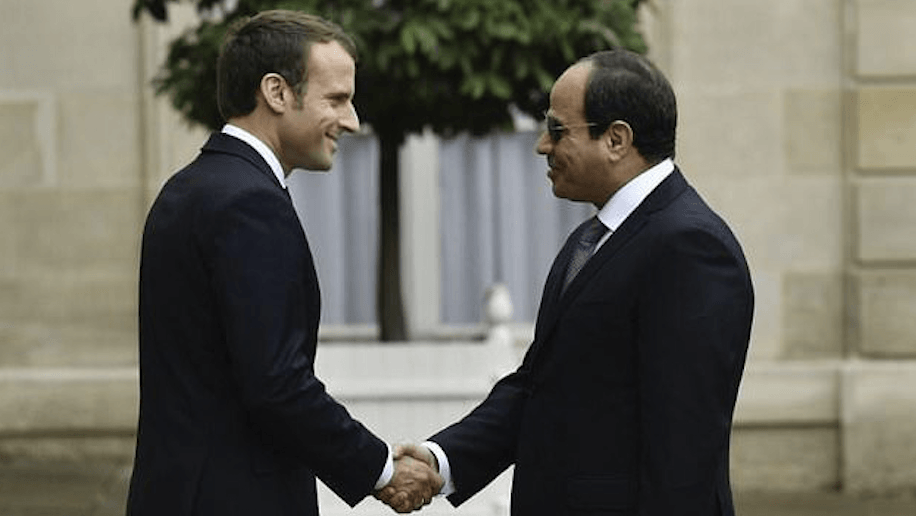 A lawyer has filed a legal complaint against the heads of four of Egypt’s human rights organizations for “threatening national security” a day after they discussed several thorny issues with visiting French President Emmanuel Macron, according to local media reports.

He accused them of “offending the Egyptian state, threatening national security, and harming high interests of the country, via spreading false news to the French officials,” reports said.

Several Egyptian human rights defenders met with Macron at the house of the French ambassador to Cairo on Tuesday afternoon, according to attendees. It was the last day of Macron’s visit to Egypt, which started on Sunday.

The meeting lasted almost two hours and broached issues such as the human rights situation and the proposed amendments to the Constitution that would allow President Abdel Fattah al-Sisi to run the country for a third term.

Zaree told Mada Masr that topics included the blocking of websites, death sentences and prison conditions. During the meeting, Zaree spoke about the arrests on Monday and earlier on Tuesday of several activists who attended a commemoration of the January 25 revolution at the Karama Party headquarters in Cairo. Zaree also highlighted the violations reported during the last presidential elections, including arrests and threats targeting potential candidates.

The CIHRS issued a statement after the meeting saying that Zaree called on Macron to “ensure that French weapons and communication technologies are not being used in Egypt against rights activists and peaceful political dissidents. This can be achieved through an independent investigation team that examines the most significant reports from human rights organizations and draws on the expertise of representatives from Egypt’s civil society and legal communities. The results of the investigation should be announced to the Egyptian and French people alike.”

Amnesty International called on France to suspend arms exports to Egypt in October, stating that French military equipment is being used for violent internal repression in contravention of international human rights law.

Tuesday’s CIHRS statement said that instead of combating terrorism, Egypt is busy “attacking human rights defenders and peaceful political opposition figures including secularists and Islamists. It is relentlessly pursuing people with non-mainstream sexual orientations and even footballers, throwing them all in prison on fabricated charges. This unhinged repressive flurry is made possible by surveillance technologies and programs Egypt has purchased from democratic states like France.”

The statement highlighted the travel ban placed on Zaree, and the threat of prison hanging over him and other human rights activists for defending human rights. Zaree was banned from leaving Egypt in May 2016, along with several other rights workers in the NGO foreign funding case. He was charged with receiving funds from foreign entities and spending them unlawfully with the intention of harming national security and the country’s interests.

Eid wrote on Facebook after the meeting on Tuesday that media and freedom of expression, also under discussion, adding that the blocking of more than 508 websites has restricted independent journalism. He also mentioned the establishment of new 20 prisons since 2011, and the closures of public libraries, including ANHRI’s Karama libraries in 2016.

Eid said that the Egyptian attendees at the meeting brought up the necessity of respecting the law, the Constitution and freedoms. He also referred to a point in Monday’s press conference held by Sisi and Macron when Macron spoke of detained “bloggers,” whom Eid described as “democracy activists using the internet.”

“If President Macron knew their disappointment at France, the country of liberties, after what he said in 2017, he would have spoke clearly years ago,” wrote Eid, referring to a press conference Sisi and Macron gave in Paris in October 2017. Macron said “I believe in the sovereignty of states, and therefore, just as I don’t accept being lectured on how to govern my country, I don’t lecture others.” He added “My deeply held conviction is that it’s in President Sisi’s interest to accompany the defense and consolidation of human rights by the Egyptian state, in the context that only he can be the judge of.”

In Monday’s press conference Macron said that he had delivered a list of detained Egyptian activists during the 2017 meeting, but that things had since gone in the opposite direction and “there are bloggers and thinkers put in prisons.” Sisi responded that “Egypt does not develop through bloggers, but with the hard work of its sons,” asked that human rights be considered in terms of the specificities of Egypt and the region, and said “expressing opinion is different from destroying the state,” according to BBC Arabic.

Zaree told Mada Masr that only two people on Macron’s 2017 list were released, and that ultimately “the number of people who enter prisons is much larger than those who get out.”

He said he hoped Tuesday’s meeting would result in an international response to discourage the proposed constitutional amendments, and that France guarantees that the arms and advanced technologies it exports to Egypt are used in “combating terrorism and not combating liberties.”

None of the meeting’s attendants revealed what was said by the French president.