اقرأها بالعربية
Which battle has EXT. Night chosen to fight? 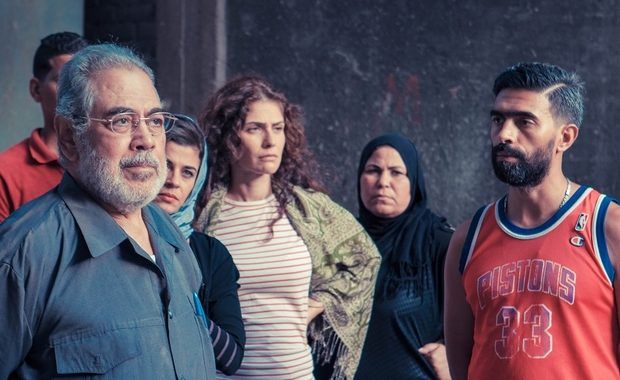 Ahmad Abdalla’s fifth feature EXT. Night premiered in Egypt as part of the 2018 Cairo International Film Festival (CIFF), where it was the only Egyptian offering in the official competition. The film opens with protagonist Mo (Karim Kassem), a filmmaker who directs ads for a living, looking frustrated on the set of a TV commercial. He rants about a recent break-up and the imprisonment of one of his friends, a novelist, for “violating public decency.”

Later, on the way to the editing studio, the driver assigned to drive Mo around during the job (Sherif al-Desouki) asks if he can stop off in his neighborhood to attend to a personal matter. Ending up in the apartment of the driver’s nephew Jimmy (Ahmed Malek), they meet feisty sex worker Toutou (Mona Hala), and so begins an adventure filled with an array of intriguing encounters in the Cairo night.

EXT. Night is co-produced by filmmaker Hala Lotfy’s 7asala, which supports young filmmakers. “A conscious decision was made to self-fund the film without relying on any major production houses,” 7asala said in a statement, “not because we want to undermine them, but because we want to experiment with alternative models.” It only received a post-production grant from the Dubai Film Market’s Enjaaz program and a color-correction award. It was set to be distributed by Film Clinic, but after Film Clinic founder Mohamed Hefzy became CIFF president he gave up the film so it could compete in the festival.

For his debut, Heliopolis (2009), Abdalla worked with Sherif Mandour, who produced Ibrahim El Batout’s Ein Shams (2008), largely considered Egypt’s first “independent” film. For his second and third films, Microphone (2011) and Rags and Tatters (2013), he collaborated with Film Clinic, known for its support of new cinematic experiments. In 2014 New Century, a bigger company, produced his fourth, semi-commercial film, Decor, which screened at the CIFF that year.

These various production methods were often reflected in the films. In Microphone, two of the main characters (played by Ahmed Magdy and Yosra al-Lozy) are making an independent film, while Décor’s protagonist (Horeya Farghali) is a set designer involved in a commercial production by an independent filmmaker, who is in turn played by Batout. In EXT. Night, Abdalla continues to probe the tensions involved in making films independently but also working in mainstream commercial environments. In the opening scene, for example, a discussion about the looks of the child who appears in the ad evolves into a debate about which battles are worth fighting while creating a visual product like an advertisement. “Choose your battles,” real-life creative director Tameem Youness advises Mo in the film.

The deployment of storylines focused on the process of filmmaking and the dynamics of production in Abdalla’s films offers a commentary on the local film scene, particularly how independent filmmakers perpetually maneuver around, and sometimes adopt, traits from traditional commercial models. His work poses questions about the relationship between a film’s production and its aesthetic forms. It also asks what exactly a film is liberated from when it isn’t tied to certain institutions — what new elements it brings to the table.

In EXT. Night, however, although Abdalla experiments with production, his narrative and visual styles are conventional, with the possible exception of the dream sequences in which Mo visualizes the film he is working on, about a young man in Upper Egypt attempting irregular migration to Europe. In the discussion that followed the film’s CIFF screening, Abdalla was asked about the Egyptian pop songs used in the soundtrack, and he answered that he wanted the film to come off as “close to the street,” a response that implied a desire to remedy the reputation of independent cinema in Egypt as “elitist,” to simulate market trends and perform well at the box office.

On classism and misogyny: “Battle in the Taxi”

As is usually the case in Abdalla’s films, the city is in an exceptional state. In Rags and Tatters there is a revolution, in Decor there is a curfew, and in EXT. Night an official procession is blocking roads and complicating the already impossible traffic. EXT. Night is rich with exterior scenes of Cairo’s streets, a feature it has in common with other Egyptian films screened at this year’s CIFF, such as Marouan Omara’s Dreamaway (set in Sharm El Sheikh) and Ahmed Fawzi Saleh’s Poisonous Roses. The three films also blur, to a certain extent, the line separating fiction from documentary, as well as the “independent” label, even though they received funding from major Arab and international institutions.

In the taxi, where most of EXT. Night take place, both Mo and Mostafa, the driver, engage in a heated race to seduce Toutou. Mo makes use of his social stature as a bourgeois graduate of the American University in Cairo, which provokes Mostafa into confronting his employer man-to-man. Class tensions pile up as one situation after another exposes the privileges each character enjoys and uses all the time.

In one scene, the three characters are eating together in a restaurant and, as the sexual competition for Toutou’s attention heightens, Mostafa slaps her across the face when she interrupts him talking to the waiter. The tension in CIFF’s cinema was as palpable as the tension in the restaurant. Everyone went silent, those watching the scene unfold in the restaurant and those in in the darkened hall.

Toutou heads to the bathroom to fix her makeup, while Mo reprimands the driver, only to be told by Mostafa that he doesn’t need anyone to teach him how to treat women. Toutou returns to the table and they continue eating. Toutou later tells Mo that she didn’t really need his help, and insists that he isn’t really that different from Mostafa, or even from herself.

This sensitivity to gender and class, evident in many interesting moments in the film, evidently did not extend to Abdalla’s casting process, in which his alternative production process and his desire to make a commercially viable film likely intersected.

The problem is casting Mona Hala as Toutou, Basma as Toutou’s relative who lives with her in the low-income neighborhood of Basateen, Amr Abed as the neighborhood thug, and Ahmad Malek as the driver’s nephew. These privileged-class casting choices affect the film’s credibility — exacerbated by reports that Abdalla let the actors alter their lines. In some dialogue scenes, the actor’s presence overwhelms the role they are playing. This doesn’t reduce their performances, but shows the sizeable gap between the roles being played and those written in the script. It is not that an actor must come from the same class as a character to be able to master the part, especially if the character is developed with a certain class awareness, as seen here in the differences between the driver, the filmmaker and the sex worker. Because cinema is itself a theme in the film, however, it does make sense to start a conversation about how class factors into the industry, how it affects the choices of labor working in it, and how, eventually, it comes to shape what we see on screen.

This looming issue calls to mind Mo’s frustration at the client’s demands for the looks of the child in the ad in the opening scene of the film — and there seems to be no big difference between Abdalla’s choices and the client’s. Abdalla has rid himself of the influence — and restrictions — of production companies, funding agencies, development workshops and consultants, which other filmmakers often complain about, and the effect of which on Arab artistic production deserves a more detailed analysis. But EXT. Night demonstrates that steering clear of dominant filmmaking methods does not necessarily create films that stand out in terms of form or style.

AD
You Might Have Missed
Where do old lesbians go to die?
Mugamma revisited: Reimagining the building and the square
What we talk about when we talk about trees
Carbon Colonies & A Green New Deal
AD
Ahmed Refaat
12 articles on Mada

Topics
Related
Cairo International Film Festival
Is it really possible to avoid politics in a place like Egypt? A conversation with Mohamed Hefzy
Muhammad El-Hajj | Can writer and producer Mohamed Hefzy evade political confrontations and compromises?
Ahmad Abdalla
Dismantling moral binaries: Ahmad Abdalla’s EXT. Night questions class and gender dynamics in post-2013 Cairo
Nourhan Hesham | EXT. Night is an honest portrayal of a struggling city with insightful commentary on class dynamics
cinema
Tamer El Said and the role of the Cairo International Film Festival
Rowan El Shimi | If it wants to compete as an international festival, the CIFF should aim to support Egypt's local film
Ahmad Abdalla
Ode to that which is lost
Lina Attalah | Ahmad Abdullah's Rags and Tatters is a document for an impossible memory, says Lina Attalah.