In December 2005, Amal Kenawy exhibited The Purple Artificial Forest for the first time at the Falaki Gallery of The American University in Cairo. A team of undergraduate curatorial interns — including myself — assisted her in setting up the video installation and accompanying sketches. Set in an abstracted domestic space, the protagonists of this eight-minute video, which won the prize for best animation film at the Cairo International Film Festival the following year, were bruised body parts: a beating heart from which leafless branches grow, a shaved semi-androgynous head, legs rotating around a central hip, a baby’s face, as well as two supernatural magenta creatures, occasionally morphing into, and feeding onto, the body parts and one another as they sit around a Rococo dining table. Their presence, in this fast-paced, almost hallucinatory experience that encapsulated the gallery, was so intense that I still visualize two life-sized sculptures of the beasts seated by a table in the exhibition space. 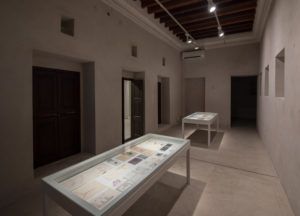 Kenawy never made such sculptures, however, as I came to realize when I got to see The Purple Artificial Forest again this November in Sharjah, the United Arab Emirates. In memory of the late Egyptian artist, Sharjah Art Foundation is currently presenting a retrospective of her work, culling the entire collection of the Amal Kenawy Estate which is managed by Darat al-Funun and The Khalid Shoman Foundation in Amman, Jordan. Before Kenway passed away from leukemia on August 19, 2012, she created an estate to preserve her work, and more importantly secure the future of her son, Yassine. Since her passing, selected works have been shown in group exhibitions in Jordan, Germany, the United Kingdom, Poland and Tokyo. A retrospective of her work was planned by Cairo’s Townhouse Gallery in September 2012, but was not realized due to disputes over the rights to her work, while in the same month Darat al-Funun displayed six of the artist’s signature works (from a solo exhibition the foundation hosted in 2007) in a show titled Homage to Amal Kenawy.

The current exhibition, titled Frozen Memory, after Kenawy’s 2002 video (which showed objects, symbolic of intimate relationships, floating in a water cube, reversed in time), expands on the Amman show. It presents a range of video pieces, drawings and paintings, as well as documentation of performances, tryouts and interviews, sketchbooks and diary-like notes, taking over the two stories of the 19th century Bait al-Serkal inside Sharjah Art Foundation’s heritage area. Frozen Memory, if not comprehensive, is unique in taking the artist’s creative process as its organizing principle. It spotlights how Kenawy developed a distinct visual language across a body of work that dissects the subconscious interchange between memory, perception, illusion and reality, unifying the form and content of her art. 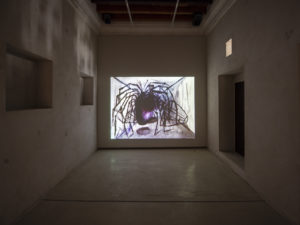 Kenawy participated in the eighth Sharjah Biennale in 2007 under the theme Still Life: Art, Ecology and the Politics of Change, and received the first prize for her site-specific performative piece Non Stop Conversation for which she swaddled a dilapidated house overlooking Sharjah’s corniche in roseate quilt fabric. The house of Sheikh Ghaloum Abbas al-Ansari still stands today, bare and cordoned off due to nearby construction work. The exhibition, held within a ten-minute walking distance, presents photographs of Kenawy, cutting and sewing the pink fabric, as well as a video of her interaction with local children who were curious about the surreal activity.

In the same edition of the biennale, Kenawy presented another otherworldly experience to much darker ends. You Will Be Killed (2006), also showing in Frozen Memory, imbues viewers with melancholic unease. Inspired by the history of Singapore’s Tanglin Barracks, where Kenawy showed the piece for the first time, You Will Be Killed shows a watercolor portrait of Kenawy, magnified and lying face-up against documentary footage of a threadbare military hospital once housed at the barracks. Spurts of blood drown her as she repeatedly tries to rise, while a woman — sketched similarly to Sandro Botticelli’s The Birth of Venus, but with her head covered in a gas mask — is viciously attacked in the pelvis by a rat. Kenawy’s signature palette of purples (a substitute for blood’s red, most visible in The Purple Artificial Forest), greys and blacks (which she used to define figures and spaces) dominate the video as we watch her face being claustrophobically boxed in a cyclical motion. 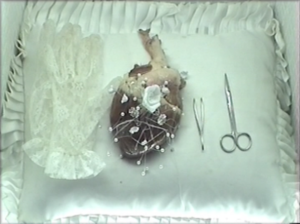 An exhibited sketchbook of the video shows Kenawy’s initial intentions to frame the audience’s Point of View (POV) as if they were looking through stage drapes, while she would have appeared from behind a screen unzipping her chest to dismantle her inner organs on a table for display.

In her lifetime, Kenawy credited her artistic practice to self-learning and a decade-long collaboration with her elder brother Abdel Ghany in the mid-nineties — the Frozen Memory video was the last piece they officially co-produced, although Abdel Ghany continued to assist her in realizing her projects till the end. Her formal education at what was then the costumes, decor and animation department at Cairo’s Higher Institute of Cinema and later the Faculty of Fine Arts seem to have, nevertheless, influenced her visual language. Kenawy was also unique in how she incorporated her body in ethereal performances on camera and stage. The disturbing picture sketched for You Will Be Killed was achieved with elegant symbolism in her 2004 video The Journey, creating one of the artist’s most iconic images, levitating in a halo of light, with her left hand reaching into a void inside her white dress. 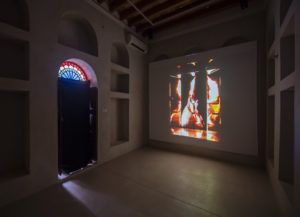 This formal and conceptual continuity is evident throughout Frozen Memory. Flipping through a displayed project proposal, we learn that Kenawy combined Non Stop Conversation and You Will Be Killed into another major project, Cairo… eating me (2008), shown at Galerie La B.A.N.K in Paris. For this project, she created a booth with a similar architectural structure to Sheikh Ghaloum Abbas al-Ansari’s house, covered it in pink fabric and screened You Will Be Killed inside its tower. On the ground floor, she projected footage of Cairo’s urbanscape onto a pair of camel lungs suspended in mid-air, seemingly breathing — an illusion she created using a motorized compressor before she manually operated it by hand toward the end of the performance. This nightmarish image, magnifying internal conflicts, feelings of social alienation, and the resultant pain by focusing on the inner working of the body, is an extension of her 2004 piece The Room.

On display is the video documentation of Kenawy performing The Room at Darat al-Funun in 2007. We see her seated on stage, dressed in black with cropped hair, altering a wedding dress that glows from within. To her right is a massive screen, showing a woman’s legs dangling from inside a cage-like petticoat, and a piece of clay morphing into a heart, repeatedly cut by footage of the artist sitting in a shower in a wedding dress and a veil, passively being drowned. We also watch a surgical image of her hands, gloved in white lace, struggling to sew a web of satin flowers and sequin onto a beating heart. The video projection ends with an image of a woman lying in bed, covered in a white sheet as nails pin her down, creating a similar web-like structure. On stage, Kenawy then gets up from her chair to set the dress on fire, leaving behind the metal frame of the hanger. 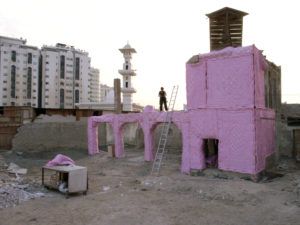 The Room is the outcome of numerous attempts, rooted in personal experiences of marriage, motherhood and her battle with cancer, with which she was first diagnosed in 2003. Early sketches of the project, exhibited in Frozen Memory, are structured around a conversation she had with her mother, who realizes for the first time that she might not see Kenawy again. The sketched scenes are mostly realistic with occasional surrealist invocations, like when Kenawy appears with a shaved head, surrounded by fluttering butterflies. The sketch ends with her mother asking why she cut her hair so short. Through several rewrites, we see Kenawy honing her thoughts and abstracting the specificities of her story into an emotionally gripping experience of anguish, isolation and transcendent rebirth. Indeed, the first audience of The Room was unacquainted with the arts, a crowd in Upper Egypt who were mesmerized by her performance. 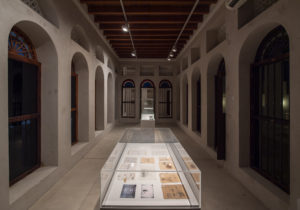 Throughout her career, Kenawy’s work has been shown in galleries, biennales, film and theater festivals and art fairs, garnering equal acclaim by audiences and critics. Readings into her practice, however, occasionally positioned it as autobiographical, feminist or reflecting constraints on women in Muslim societies. This framing bothered Kenawy, who believed that the issues she engaged with, although inspired by her experiences living in Egypt, were not restricted by gender or geography.

Later works, including the 2010 performance Black Dog, reflect her attempts to further experiment with different formats. A video documentation of a rehearsal shows her working with two dancers to translate the same central issues permeating her practice into pure physical expression. Playing with warm stage lights, three stacks of flickering neon light rods, and a projection screen, the resulting show lies somewhere between animation and shadow puppetry.

Black Dog also deconstructs the format of dramas to further blur the boundaries between reality and the world of dreams. On the screen, Kenawy presented each scene in writing to frame the dancers’ movements. She wrote, for instance, how she had a “real” experience in 2000 of being a war casualty with an amputated hand and injured foot. In one of several scenes she titles as the finale, she describes watering an entire garden with five drops of her tears, before screening The Purple Artificial Forest. 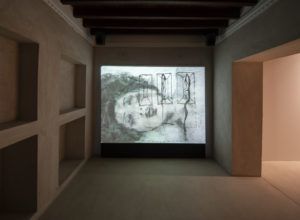 Other works exemplifying a stronger break with her signature motifs — such as her video installation Blue (2008), which presents a video of her leading a horse back and forth, while a real fountain splashes water onto the screen, or Fighter Fish (2010), a video in which she plays a seductress, straddling an unconscious man from Philip Burne Jones’ painting The Vampire — have not made it into the collection of The Amal Kenawy Estate, and hence the Frozen Memory exhibition. It is unfortunate that such works aren’t seen in a major retrospective for Kenawy that might define how her work is read and written about.

This might be compensated, however, by the abundance of archival material included in Frozen Memory. Penned on a range of materials from floral fabrics and wallpaper samples to kraft and tracing paper, old envelopes and Winnie-the-Pooh notebook sheets, taped or sewn together, Kenawy’s sketches show an overflow of inspiration that needed to be momentarily documented, before being reworked and rewritten for her various projects. Among the most intimate documents on display, perhaps apostrophizing the artist’s rich practice, is a note by Kenawy handwritten on a thin strip of paper: a prayer for inner peace and spiritual connection.

AD
You Might Have Missed
What we talk about when we talk about trees
Where do old lesbians go to die?
Carbon Colonies & A Green New Deal
Mugamma revisited: Reimagining the building and the square
AD
Mai Elwakil
34 articles on Mada