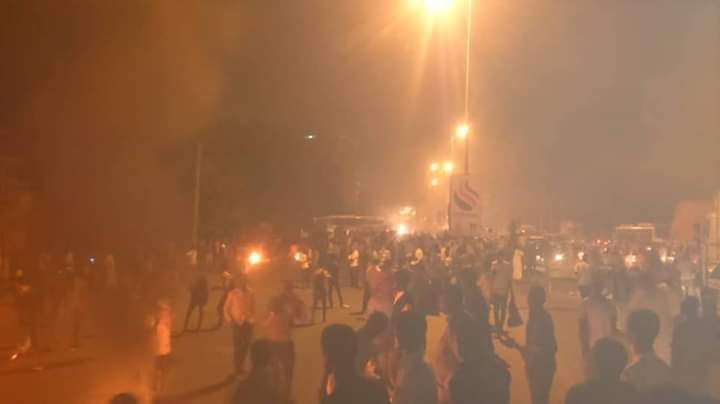 Protests continued across Sudan on Friday shortly after prayers, with eyewitnesses reporting the use of live ammunition by security forces in Khartoum as well as other cities as countrywide demonstrations enter their second week.

The Sudanese Professional Association called for Friday’s protests and for a general strike to step up pressure on the government of Omar al-Bashir.

“We are gaining momentum with the strikes and protests in order to reach a general strike,” a statement by the independent association reads. “We are very confident of what we are doing and are working together with doctors, journalists and other syndicates.”

The protests in Sudan first erupted in the city of Atbara, River Nile, on December 19 against a bread shortage and soaring prices. They quickly spread across the entire country, however, with demands ascending to calls for Bashir, in power since 1989, to step down.

Friday’s protests spread wide despite security forces quelling one of the biggest rallies since the movement started two days before, on Tuesday, when demonstrators vowed to march to the presidential palace in Khartoum.

Khaled Fathi, the editor-in-chief of al-Tayyar newspaper, told Mada Masr that he was injured in his leg as police fired tear gas randomly at protesters during Tuesday’s protests in central Khartoum. His colleague, Maha Altilib, a journalist with the newspaper, was arrested during today’s protests.

Fathi said that security personnel are firing live rounds against protesters. “I saw special forces belonging to the ruling Islamic National Congress Party wearing police uniform and shooting to kill protesters, although there was no violence by the demonstrators in downtown Khartoum,” he said.

In a press conference on Thursday evening, Sudanese Minister of Information Bushara Juma told journalists that 17 protesters were killed outside Khartoum in the states of Northern, River Nile, Gadaref and White Nile. He also said that two security personnel were killed in the protests.

However, on Monday, the London-based Amnesty International put the death toll in Sudan after five days of protests at 37.

Journalists, who are rallying against increasing censorship, had also announced a three-day strike to protest security attacks against those of them who decide to cover the demonstrations. According to the Sudanese Journalists Network, security forces detained 10 journalists in central Khartoum on Thursday in what the independent network described as a “revenge campaign.”

Police raided the office of al-Sudani newspaper on Tuesday and hit journalist Yasser Abdullah on the head, according to the network, which also reported different abuses against journalists who are covering the protests, including torture in detention and banning newspapers that publish reports on the unfolding events.

At the political party ranks, a source at the National Umma Party said the party is planning to withdraw from the national consensus government in light of the latter’s excessive use of violence against protesters. The national consensus government was formed in 2017 without any key opposition players, including the Umma Party and the Darfur-based Sudan’s People Liberation Movement.

Meanwhile, the Rapid Support Forces (RSF), a paramilitary force tasked with protecting the president, is distancing itself from the government. In an address to his forces in the state of North Darfur, General Mohamed “Hemeti” Hamdan, the commander of the RSF, denounced the shortage of cash and other essential commodities, criticizing the government for not attending to the deteriorating economic situation more closely.