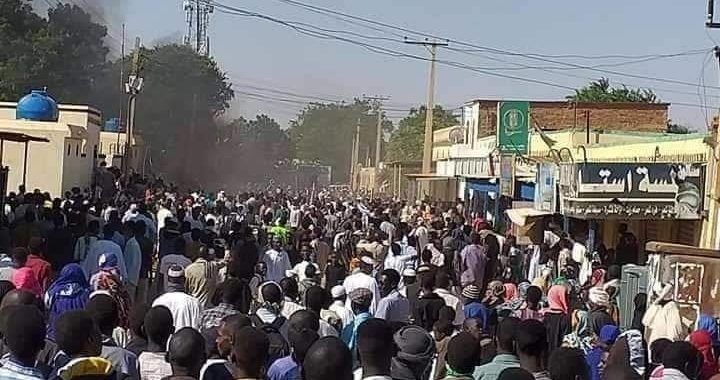 Protests in Sudan against worsening economic conditions continued for a fifth day on Sunday and have grown to include hardcore football supporters — known as ultras — of popular football club Al-Hilal, with demonstrations erupting after a match in Omdurman, the twin city of the capital Khartoum, on Sunday night.

“Protesters took to the main streets of Omdurman and tried to close the bridges linking Khartoum with Omdurman,” eyewitnesses told Mada Masr, adding that security forces used tear gas and rubber bullets against the demonstrators.

The protests, which erupted on Wednesday over inflation, food shortages and rising prices have grown to calls for the ouster of President Omar al-Bashir, who has been in power since 1989.

Meanwhile, Sudan’s Doctors Syndicate announced an open strike on Monday in solidarity with the protests and blasted the “unjustified” use of force against demonstrators. “We saw with our own eyes inside hospitals how live bullets were used,” the syndicate said.

The administration of Sudan University also issued a statement saying it stood in solidarity with “the demands of the Sudanese people” and called on security forces to stop using “excessive force” against protesters.

The Sudanese military confirmed its support for Bashir in a statement published by the Sudanese State Agency on Sunday, saying that the national army, rapid support forces and security bodies reiterated their support for the president.

However, several Sudanese media reports, which have since been censored by authorities, claimed that a number of senior army officers aligned themselves with the protesters in the cities of Atbara, Gedaref and Port Sudan.

The protests have expanded beyond Khartoum to reach other areas of the country, including the Northern State and the eastern state of Kassala, with demonstrators also setting fire to the ruling National Congress Party offices in the cities of Obeid and Rahad in North Kordofan.

The Minister of Higher Education, Al-Sadiq al-Hady, has ordered the closure of schools and universities, and a state of emergency initially proclaimed on Thursday in Gedaref has been extended to four states in central, north and eastern Sudan.

By Saturday, the fourth day of the protests, the death toll had risen to 22, according to former Prime Minister and political dissident Sadiq al-Mahdi, speaking at a press conference on Saturday.

“22 people were martyred in the past few days and that means the government has illegally used massive violence against protesters,” Mahdi, an opposition figure who returned to Khartoum in 2017 after four years of political exile in Egypt, said. The government’s official figures had previously put the death toll at eight.

As the protests have continued, Sudanese authorities have sought to discredit them as part of a foreign conspiracy. At a conference gathering of pro-government political parties, Faisal Hassan, the presidential assistant, claimed that rebels and other opposition groups had received assistance from Israel to spread chaos in the country. Faisal hinted that the rebels belong to the Sudan Liberation Movement, an opposition group active in Darfur.

“It’s normal for people to protest to say that there are crises in the country, and we’ve admitted that. However, other members from the opposition, as well as rebels who have received training in Israel, have intervened and used violence to sabotage and spread chaos by burning and looting public and private properties,” the official said, adding that these rebels and opposition members have converted peaceful protests into violence.

Hassan added that security forces arrested a member of Sudan’s Parliament in the Northern State, accusing him of being part of the alleged Israeli plot.

In a meeting with the chief editors of local newspapers in Khartoum on Friday night, the head of the National Intelligence and Security Services (NISS), Salah Gosh, also accused Israel of recruiting members from the Sudan Liberation Movement, which is headed by Abdul Wahid al-Nur.

SLM spokesperson Abdel Rahman al-Nayer denied the accusations, saying that it was the government that used violence against peaceful demonstrations. He further called on the international community to open an international investigation into the killing of civilians and to hold the perpetrators accountable.

“We know the government makes such claims to cover its well-known role in the killing of protesters, like what happened in 2013, and in Darfur as well,” he said.

Topics
Related
Egypt-Sudan relations
12 killed in nationwide anti-austerity demonstrations in Sudan as police use tear gas and live rounds to disperse protesters
Popular protests in Sudan sparked by inflation, food shortages and rising prices enter third day
Egypt-Libya relations
Cairo, Khartoum discuss end to proxy fighting in Libya in bilateral meeting
Sources close to the talks say that Libya was slated to be the primary focus of the meeting
Renaissance Dam
Renaissance Dam discussions in Sudan expected to produce shared initial understanding
Asmahan Soliman | As negotiations begin, officials are hopeful that agreements will be reached between the 3 countries
Egypt-Sudan border
Egypt and Sudan: Diplomatic pacification, unresolved affairs
Hossam Bahgat | Ambassadors to both countries return to their posts on the same day