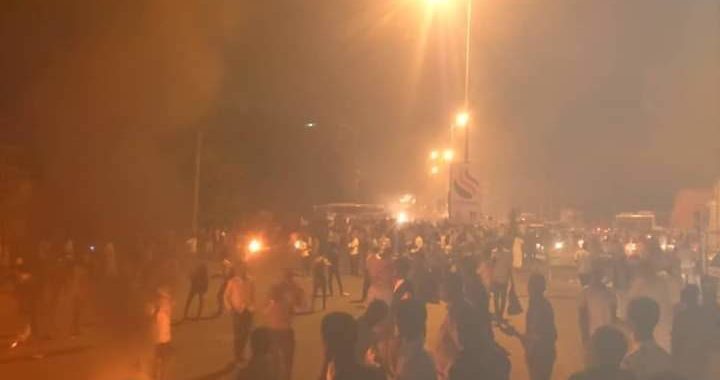 Popular protests sparked by inflation, food shortages and rising prices are sweeping through Sudan for the third consecutive day.

According to medical sources in Sudan, at least 12 people have been killed in violence that has seen police use brutal force, widespread detentions and a curfew to suppress dissent.

With protests continuing to grow, Sudanese internet service providers (ISPs) have attempted to block access to many social media and messaging platforms over the last day, including Twitter, Facebook and Whatsapp. The civil society group Netblocks has collected over 300,000 individual measurements that show ISPs Zain-SDN and MTN have implemented blocking schemes. Despite the state crackdown at the hands of security forces and the police, protesters tell Mada Masr that the Armed Forces have offered protection to demonstrators.

The protests continued en masse on Friday in the capital and other cities across the country. In Khartoum, dozens of demonstrations took place across the city, with protesters chanting against austerity measures, called for the ouster of Sudanese President Omar al-Bashir, and praising the military for its protection. Police have continued to use tear gas to suppress the demonstrations.

However, in the northeastern city of Atbara, two protesters tell Mada Masr that security forces are using live rounds to disperse demonstrations, and that three protesters have been injured.

The protests began on Wednesday, 200 kilometers away from the Sudanese capital of Khartoum, but quickly expanded to other cities, including Port Sudan and Madani in the Gezira State. By Thursday, protests began to centralize around universities in the capital, which saw intense clashes between police and protesting students, a university student told Mada Masr on Thursday, speaking on condition of anonymity.

“We organized ourselves to go onto the street from the main campus of Khartoum University, but the police, security officers and students loyal to the ruling party cracked down on the protesters to prevent us from going outside the campus. Many students were injured, but we eventually made our way onto the streets around the campus,” a student told Mada Masr on Thursday night. “We expect the authorities to close the universities in the coming days, but that won’t stop us.”

According to the protester, one student was killed in the clashes with police and security forces, who used tear gas and live bullets to disperse the crowd.

Away from the capital, protesters have set fire to the ruling National Congress Party’s offices in Atbara and other cities over the last two days.

Bellingcat has been able to confirm multiple videos and photos that show protesters setting fire to the ruling party’s office in Atbara and a rural council building in the small town of Bawga, located north of Atbara.

In Atbara, for example, protesters have set fire to the headquarters of ruling the National Congress Party, led by President Omar al-Bashir. There's plenty of visual evidence of the unrest, such as this video. Geolocation: 17.694190, 34.001319 (https://t.co/pyjkB7rnCf). pic.twitter.com/7iczAieMyc

It appears that #مدن_السودان_تنتفض protestors also stormed the Rural Council of the small town of Bawga in the Nile River State — and torched one of the buildings. Geolocation: 18.247310, 33.896051 (https://t.co/2AGhWgz8lN). pic.twitter.com/O42KGYfAkw

Protesters in the city of Gedaref faced a heavy security crackdown on Thursday.

“While we were protesting in the market of the city, the police shot tear gas at us. Then, the security forces started to shoot at people. More seriously, we saw many snipers targeting protesters,” says one of the protesters in the city.

Here's an image of an alleged tear gas canister being used in Sudan. It appears to be exported by Norinco, a Chinese defense corporation. Reference image from their website is also a match: https://t.co/O26Ifz7faP. (? via @wdalhadu, cc @joeyayoub @ramah_kamal). pic.twitter.com/QfZ3CZxSeD

This video allegedly shows security forces dispersing #مدن_السودان_تنتفض protestors with +10 shots being fired on 20 Dec 2018. One protestors is laying on the ground. Geolocation shows it happened in central Qadarif, #Sudan: 14.039463, 35.389654 (https://t.co/OdSEvXwKGH). pic.twitter.com/ObNBFyaQMx

Despite the excessive force, some protesters have been successful in withstanding the crackdown. A protester in Atbara told Mada Masr on Thursday that demonstrators in the city have largely been able to defeat the police, and many ruling party leaders have fled the city.

Mada Masr obtained video footage from Gedaref that purportedly shows the deputy governor of the state fleeing in a speeding car amid a crowd of gathered protesters.

In the midst of the clashes between security forces and protesters, Sudan’s Armed Forces has emerged as an important third party.

Protesters tell Mada Masr that Armed Forces officers have intervened to protect civilians in Atbara, Gedaref and Port Sudan, among other cities.

According to a protester in Gedaref, Major General Mohie al-Din al-Hadi asked those demonstrating to refrain from damaging public property, saying that he would protect protesters if they committed themselves to peaceful demonstration.

And according to a protester in Atbara, Colonel Mohamed Karshom prevented Rapid Support Forces (RSF) militias from entering the city on Tuesday night to oppress the civilians.

Here's another video where apparent Sudanese Armed Forces are being welcomed by the protestors. This time a video (h/t @TAJO_mohamed) has been geolocated (thanks @trevorsnapp) to Qadaref; the pickup is driving past this junction: 14.042603, 35.386005 (https://t.co/bDMYDy8uFa). pic.twitter.com/Bv99jjlLvg

“We appreciated the alignment of the army with the people to protect civilians,” the protester in Atbara says. “However, now the security forces are waging a wide scale detention campaign.”

Medical sources who spoke to Mada Masr on condition of anonymity say that at least 12 people have been killed in Khartoum, Gedaref, Karima in the Northern State, and the city of Berber in the River Nile State.

The government’s official figure currently sits at eight people, which includes six killed in Gedaref, according to a public statement issued by Gedaref commissioner Al-Tayyib al-Amin on Thursday night, which also announced a statewide state of emergency.

According to the government, two other people were were killed in Berber, as announced by the state’s spokesperson, Ibrahim Mukhtar Mustafa.

In a Friday morning statement, Bishara Gomaa, an official government spokesperson and minister of media and information communication technologies, stated that “the protests have been derailed off their intended course by infiltrators, who have transformed these initially peaceful demonstrations into destructive activities. Government institutions, as well as public and private properties, including some police stations, have been targeted by acts of burning and demolition.”

Gomaa’s statement also noted that political entities have sought to manipulate the ongoing situation in order to “destabilize national stability and security and achieve their political agenda.”

“The government will be unforgiving with those who participate in acts of destruction and will not hesitate to bring a decisive end to all this chaos,” read Gomaa’s Friday statement.

At the start of December, Sudanese lawmakers backed constitutional amendments to extend term limits that would have required Bashir, in power since 1989, to step down in 2020.