‘Nobody is leaving their homes’: Government decision to reclaim land fuels anger in Warraq Island 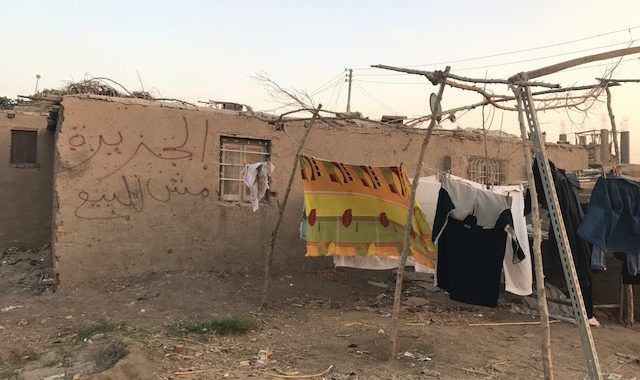 The struggle between residents and the state over Warraq Island saw a new development on Wednesday, as a Cabinet decision was taken to expropriate land on the island for public use.

The decision was met with continued defiance from a number of the island’s residents, who consider it “unfair” and have expressed their refusal to comply with it.

Cabinet Decree 49/2018, dated November 22 and published in the Official Gazette on November 28, defines the area to be reclaimed as “100 meters around both sides of the Rod al-Farag bridge in the Warraq Island area.” In addition, “areas located in the 30-meter range of the island’s perimeter will be expropriated to establish a corniche.”

The decision was revealed four days after the State Council Administrative Court adjourned a lawsuit filed by residents of the island against the government’s earlier decision (Decree 20/2018) to allocate a number of areas on the island for the “establishment of a new urban community.”

Residents, who in September of last year formed a Family Council to speak on their behalf in an effort to halt the reclamation campaign targeting their lands, expressed a palpable sense of outrage at the government’s decision to move forward with its plans, despite the ongoing lawsuit.

“We’ve spent a year and a half in talks with the [authorities]. When they seized 38 feddans for the Rod al-Farag bridge, we didn’t say anything and even offered our help, although they demolished 60 houses,” says Yehia al-Maghrabi, former head of the Local Council of Warraq Island and member of the Family Council, to Mada Masr.

The Family Council issued a memorandum in October outlining its basic guiding principles, the most notable of which was “no negotiations over the land of Warraq Island.” It has also sought to challenge the lack of clarity surrounding the island’s development plan, demanding that the government engage in transparent and inclusive dialogue with the community as a whole before any formal negotiations take place.

“Why does the government want to seize 200 meters around the Rod al-Farag bridge?” Maghrabi asks, adding that, until his conversation with Mada Masr, he had not been aware of the latest government decision. “I can understand taking eight meters for each side of the road, which is what was agreed on before. But [if they take 200 meters], there are about 500 houses that will be demolished.”

The compensation offered by the government — LE1,400 per square meter — is unfair to the residents, says Maghrabi, because it is much less than the price per square meter for a piece of land surrounded by the Nile, which is likely to be used for tourism and investment construction. No one knows exactly what the government’s development plan for the island entails, he adds.

Indeed, much of the frustration expressed by residents appears to have its roots in a lack of government transparency and inclusiveness. The second article of the decision issued on Wednesday stipulates that “the pieces of land necessary for the implementation of the project shall be seized by way of direct execution (…) without awaiting land surveys from their owners, provided that the land surveys are conducted by the Egyptian Survey Authority, before offering compensation to the owners.”

“If this was a proper government, an official — a governor or a civilian official, not a military one —would come and talk to the people whose homes they are planning to demolish, instead of surprising them,” says Attiya Ibrahim, a resident of the island and a member of the Family Council.

Expressing his anger about the decision, he adds, “Nobody is leaving their homes. Let the government decide all it wants, nobody will follow its orders. We’ve said as much to [Kamel] al-Wazir before.”

Wazir, the head of the Armed Forces Engineering Authority, has met with the residents of the island twice before. During the first meeting, he made a telephone call to President Abdel Fattah al-Sisi, who spoke to the residents directly on the phone and said, “We are here to serve you and we’re not against you. You are our children and our people, and you cannot be displaced. But we want to develop the island.”

The second meeting between Wazir and the residents of Warraq was during a rally held on the island, where he faced heated objections from the residents about the uncertainty surrounding the development plan. He tried to reassure them, saying: “We will not take one centimeter from the residents by force. We would never do that.” He added that no decision about how to take and use the reclaimed area would be made without the residents’ consent.

However, his statements appear to have done little to reassure Warraq’s inhabitants. Resident Nasser Abul Enein asserts that the government intends to demolish and reconstruct the entire island, after laying out an investment vision for it. He regards the decision published on Wednesday as unjust, stressing that the residents will legally challenge it.

“The area that will be taken [beside the Rod al-Farag bridge] is 200 meters in width, along a length of about two square kilometers,” says Abul Enein. “It is covered with residential houses, and has about 5,000 to 10,000 people living on it. Then the area around the perimeter, [which they want to use for a Corniche],  is about 30 square meters, out of a total of 15 kilometers. Yes, it contains public land and endowments, and the riverbank. But it is also home to up to 20,000 people, and their economic situation is difficult.”

Abul Enein says he is baffled by the fact that the decision to expropriate the area surrounding the Rod al-Farag bridge did not include other neighborhoods, such as Shubra. “The buildings of the Aghakhan area in ​​Shubra are right next to the bridge, but no one considered reclaiming them for public use,” he points out. Abul Enein believes it is clear that the decision was motivated by the government’s realization of the island’s investment potential.

Maghrabi, the member of the Family Council, claims that residents were told by officials at the Real Estate Notary Agency in Imbaba that a decision had been made to prohibit the recording of sales or purchases of any land on the island, preventing the island’s residents from selling or buying their properties. In his view, this leaves the residents with only one option: to accept the meagre compensation offered by the government. He notes that the land would be sold for a minimum of LE150,000 per square meter following the proposed development, adding, “They want to kill the island.”

While Maghrabi believes that the latest reclamation decision is illegal, he asks, “Why doesn’t the government give every resident a replacement apartment and land on the same island? I don’t want to leave this island. The government has said it will allow us to rent once new residential buildings are constructed here, but why don’t they give us new apartments in exchange for the old ones, without us having to pay money? This is my island, and I can’t afford to buy a new home using the amount offered by the government as compensation. I want to stay in my house and my land with my cattle. I don’t want to leave.”

The Warraq island crisis began in June 2017 when President Abdel Fattah al-Sisi, in a speech about the need to reclaim public land infringed upon by construction, referred to the area as “an island in the middle of the Nile that stretches over 1,250 feddans. Havoc has spread in it, and people have been building on land that they seized. And now there’s 50,000 houses there.”

“Where does their sewage go?” the president said. “It goes into the Nile water that we drink. We can’t allow that and hurt ourselves.”

The following month, police forces, accompanied by officials from the ministries of endowments, irrigation and agriculture, raided the island to carry out demolition orders, targeting 700 buildings constructed on public land, according to a statement issued by the Interior Ministry at the time. Clashes erupted between the security forces and the residents who protested against the demolition work. One person was killed in the clashes and 19 others were injured, according to Ministry of Health statements at the time. 37 police personnel were also injured, according to the Ministry of Interior’s statement, and 10 of the island’s residents were arrested.

On June 3, former Prime Minister Sherif Ismail issued a decree authorizing the New Urban Communities Authority (NUCA) to establish “a new urban community” on Warraq Island lands. The decree indicated that the new community includes nearly all the land on Warraq Island, placing the whole island under the jurisdiction of the NUCA.

Al-Shorouk newspaper published details of what it described at the time as a NUCA project for turning the island into “a touristic, cultural and commercial entertainment hub on the Nile” named Horus, according to the plan, a copy of which Mada Masr obtained.

AD
You Might Have Missed
Carbon Colonies & A Green New Deal
Mugamma revisited: Reimagining the building and the square
Where do old lesbians go to die?
What we talk about when we talk about trees
AD
Hadeer El-Mahdawy
50 articles on Mada