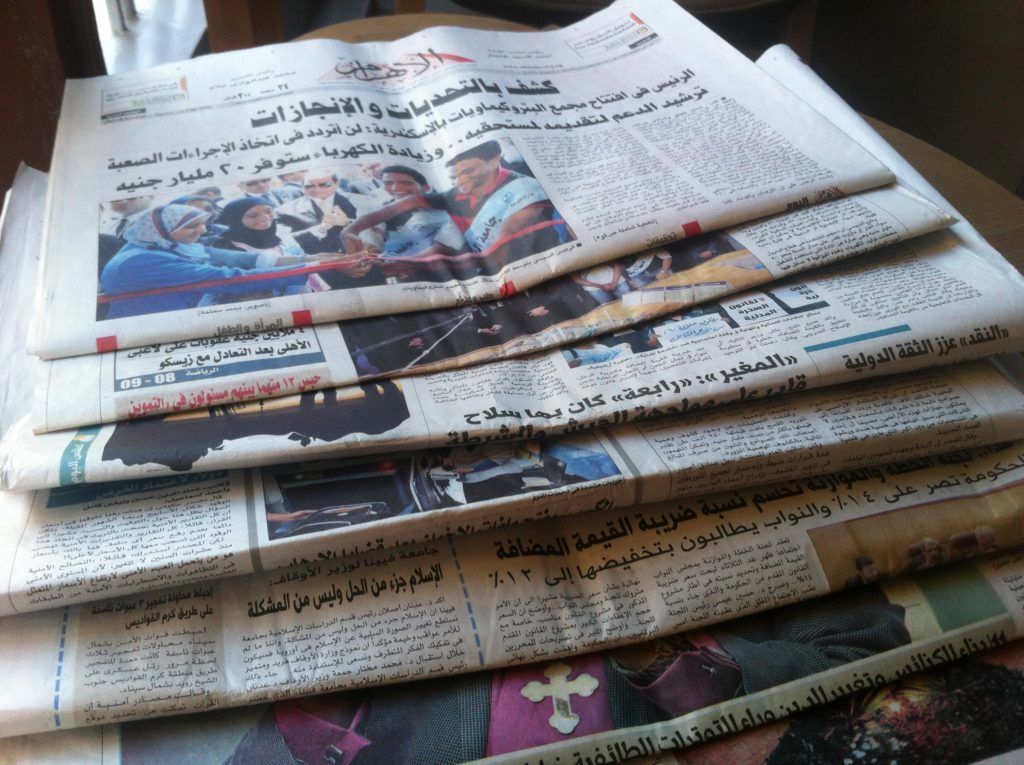 A draft proposal put forward by Gamal Shawky, the head of the complaints committee of the Supreme Media Regulatory Council (SMRC), outlines a raft of stiff penalties, including blocking websites, suspending broadcasts and imposing hefty fines, for media organizations that violate a wide set of ambiguous rules.

A leaked version of the draft, which was obtained by Mada Masr, is composed of 30 articles that establish a broad range of vague violations that press organizations could be accused of. These offenses include: insulting individuals or state bodies; spreading and broadcasting rumors or anonymously sourced news; inciting violence, hatred and discrimination; questioning the financial records of officials without evidence; violating the rules of media coverage in war or during security operations and terrorist incidents; insulting the values and beliefs of society; broadcasting unjustified scenes of violence and something described as “criticizing citizens’ behavior in a form that exceeds the boundaries allowed for criticism.”

Penalizing journalists for questioning the financial records of officials “in a country which lacks the right to information will only encourage corruption,” Badr added.

The draft proposal also outlines a variety of penalties that could be imposed on media outlets, including referral to investigation, suspending a broadcast, blocking a website and imposing a fine ranging between LE10,000 to LE500,000. In the case of repeat offenses or refusal to abide by a penalty imposed, the fines can be doubled.

The financial penalties are “very, very high,” Badr points out.

The draft bylaws also ban any other state body from investigating media violations without notifying the SMRC and set a 10-day time limit for any appeals to be made.

The bylaws apply to a wide range of material, including TV programs, films, commercials, and print publications, as well as everything published on the internet by news websites, social media pages, or private accounts which have more than 5,000 followers, Shawky told Mada Masr.

He also explained that the work of the complaints committee is only advisory, while it is the SMRC itself that is in charge of defining and imposing penalties, looking into appeals and collecting any fines imposed, which would then be added to the council’s budget.

SMRC Undersecretary Abdel Fattah al-Jabali downplayed the significance of the draft proposal, telling Mada Masr that it is “nothing more than the views of colleagues on the complaints committee, and has not been discussed by the SMRC.”

The SMRC’s official website published an article on Wednesday stating that the complaints committee had, in fact, completed a draft of the media violation bylaws. It is unclear whether they are referring to the same draft put forward by Shawky or not.

Meanwhile, Mohamed Saad Abdel Hafiz, a member of the Journalists Syndicate, told Mada Masr that, in response to questions from the syndicate on Wednesday regarding the draft proposal, the SMRC stated that there is no final draft yet and that it still has to be discussed and finalized by the council. Abdel Hafiz added that the Journalists Syndicate will discuss the issue at its board meeting next week and that it will request that the council present a draft of the penalty bylaws to the syndicate for consultation.

The leaked draft proposal is not a list of sanctions for media violations but rather “an attempt to silence what’s left of journalism” in Egypt, Abdel Hafiz stated, adding that he believes that there is a disagreement within the council between a “wing that is hostile to press freedom and seeks to eliminate it, and another wing that is trying to preserve journalistic practices in Egypt.”

The SMRC was formed under a controversial new media law — known as the Law on Regulating the Press and Media and the SMRC — that was ratified by President Abdel Fattah al-Sisi in August. According to the law, a new body of members making up the Supreme Media Regulatory Council will be formed at an unspecified future date.