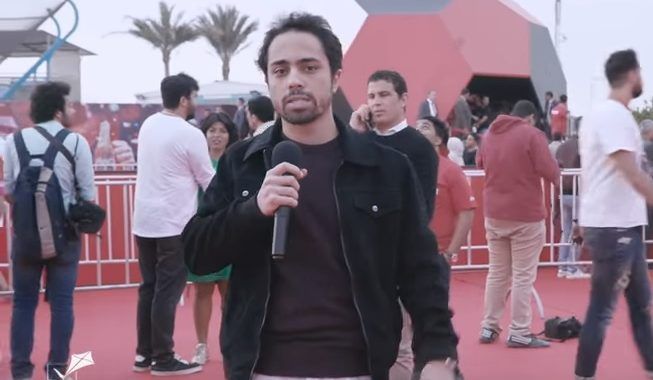 On May 6, 2018, nearly two dozen police personnel raided Shady Abu Zeid’s home at dawn. They rifled through his belongings, seizing laptops and mobile phones, before hauling him away. He has been in prison ever since, held in remand detention on the catchall charges of joining an illegal organization and spreading false news.

It remains unclear what provoked the 25-year-old’s sudden arrest. He is not a political organizer or agitator. He’s a video blogger and satirist; a comedian with a diminutive physical stature and an outsized persona.

A media studies graduate from the October University for Modern Sciences and Arts, he began posting videos in mid-2015 on a YouTube channel called The Rich Content. The videos, over two dozen in number, showcase his talents as a satirist and an artist with range. Some are straightforward and direct, others abstract and obscure, but all of them are original; they have a way of questioning and probing into Egyptian society, laying bare its most absurd norms in a distinctive style.

“He was deconstructing everything,” says Andeel, a cartoonist and satirist who is a regular contributor to Mada Masr. “He was doing social comedy, opening dialogue with people and with society itself, and he was challenging social norms and established social ideals. He wasn’t challenging the state at all, nor was he inciting against it. He wasn’t even speaking about it. He was ignoring its presence.”

Shady is detained as part of Case 621/2018, one of the larger cases against non-Islamist figures such as bloggers Mohamed Ibrahim (Oxygen) and Mohamed Khaled, activists Shady al-Ghazaly Harb, Amal Fathy and April 6 member Sherif al-Rouby. The case, which has not been referred to trial, is an open one with defendants being added in piecemeal fashion.

Several days after his arrest, Andeel dedicated an episode of his web show “Big Brother” to Shady as a tribute. “He is one of my favorite comedians, and one of the few people whose work I really love and that I find very inspiring, because he is one of the few people that has a distinctive comedic voice, one that is not like anyone else’s,” he says.

In one of the first videos posted on The Rich Content in July 2015, Shady skewers the casual prejudice against Coptic Christians so prevalent in Egypt. He strips bare the duplicity of all too common declarations of interfaith, unity and brotherly love that are often intermixed with discriminatory caveats, intolerance and insult. He ridicules the familiar by exposing it.

(“My Muslim brother…what to do if you go to heaven and find your Christian neighbor there.”)

The most frequently addressed topic in Shady’s videos is sexual harassment. It appears to be the social issue that angers him the most, and the one he is most passionate about. Over the past few years, he has spent his Eid holidays — when harassment is typically most widespread with crowds vacationing in the streets — working on anti-harassment campaigns, including one that involved spray painting stencils on unsuspecting harassers’ backs to single them out.

“For a long time, Shady’s efforts to combat sexual harassment were individual efforts and his campaigns were not supported by any group,” Azza Gamal Eldeen, a friend of his, writes in a Facebook post. “He was beaten and abused by harassers in the street and he continued to support many women subjected to harassment and violence anyway … even if he wasn’t friends with them or did not know them from before.”

A video from September 2016 is a prime example of Shady’s work: confrontational and comical. Shady, short and slight in stature, walks the streets of Cairo alongside a much larger, heavyset friend. They repeatedly stop young men and ask them how many women they have harassed. Once the proud confession is made, his large friend breaks a raw egg on the harassers’ heads, leaving their faces dripping with yolk. It’s a form of public shaming, tinted with a violation of personal space and physical boundaries similar to that which women face when they are harassed.

It was after one of his anti-harassment videos in mid-2015 that Shady was invited to work on Abla Fahita, a satirical talk show airing on CBC (the show was canceled in March). He quickly rose to prominence as a correspondent on the show, doing street interviews that poked fun at how Egyptians deal with a variety of social issues and conventions. Among his more prominent videos was one in which he traveled to Daqahlia to interview constituents of newly elected Member of Parliament Tawfik Okasha, and another where he dressed up as Santa Claus and handed out gifts to pedestrians.

“He ended up carrying the whole season on his shoulders, moving the program forward and attracting new audiences,” Mahmoud Ezzat, a producer on the show and a close friend of Shady’s, writes on Facebook. “People would come up to us and tell us they would wait during the show for his segment. He never, not once, displayed any ego about his newfound fame … He is definitely among the smartest and brightest people I have ever worked with.”

In early 2016, Shady sparked controversy by posting a video on the fifth anniversary of the 2011 revolution showing him and actor Ahmed Malek pretending to celebrate Police Day on January 25 by handing out balloons made of inflated condoms to unwitting police officers in Tahrir Square. On the balloons they had written: “From the youth of Egypt to the police on January 25.”

The video quickly went viral, garnering more than 1.4 million views within a day and prompting a senior police officer to file a complaint calling on the two pranksters to be prosecuted.

Malek, a young up-and-coming actor at the time, was sanctioned by the Actors Syndicate. He quickly apologized and went on to pursue a successful career and increasing fame.

Meanwhile, Shady released a statement defending his right to “address social issues in a comedic way” and criticized threats made against him on the official Facebook page of the police. His family eventually filed a legal complaint requesting the Interior Ministry ensure his safety.

“The Constitution of the Republic of Egypt that was approved in 2014 explicitly protects the freedom of speech and creativity and holds all state bodies responsible for protecting those expressing their opinion and creativity, not to terrorize and threaten them with abduction and torture,” Shady wrote.

Abla Fahita issued a statement denouncing the video as “insulting and unacceptable” and Shady was let go. He continued his work independently, posting videos on The Rich Content, and making a conscious decision to steer clear of overtly political issues.

“He was very adamant not to engage in politics, he knew it was a very tough situation,” says Wael Iskander, a friend of the satirist who appears in some of his videos. “He’s a video blogger who does engagement with the street, he does stuff that talks to society. That’s what he was passionate about.”

One of the funniest videos is from this past January, where Shady interviews people on the street about their thoughts on aliens. Through his questions, he teases out conventional ideas about religion, traditional family values and fear of the other. The sheer absurdity of the responses contrasts with his deadpan expression.

Shady has now spent over six months in prison.

Ever since his arrest in May, messages of support have poured onto social media. Friends post photos of him and recount funny anecdotes. They remind each other he has not been forgotten and tell stories of his kind gestures and wild antics.

Together they paint a picture of an outgoing, big-hearted jokester; a loyal friend who loves animals, movies, playing guitar and going to the beach. And without exception, friends and family highlight one trait above all others: his humor.

To his peers, even those inured to the recurring waves of arrests in Egypt over the past few years, Shady’s detention came as a shock. They express incredulity at the lack of a clear premise — even by the state’s obscure standards — for his sudden imprisonment.

“To be honest, it was the first time I ever felt deeply affected,” says Andeel. “There are personal reasons that have to do with what I do, and the fact that his arrest is a message to everyone who does similar things,” he says. “But I was also affected on a political level because what Shady was doing was not dangerous at all with regards to the state.”

A few days after police raided Shady’s home, a photo was released of him standing in shorts and a T-shirt behind a table strewn with items only the state would imagine to be incriminating: revolutionary posters, a tear gas canister, bottles of alcohol, a gas mask and a Guy Fawkes mask.

“I felt quite defeated,” Iskander says. “Here is a person who has gone out of his way to not engage politically so as not to get arrested, who then gets arrested anyway. It felt really upsetting and shocking. It’s not like he’s done something to warrant this.”

Shady’s sister, Roula, visits him in prison and writes frequently about her brother on Facebook. After a recent visit, she posted photos of a stunningly intricate model boat he had made for her out of hundreds of thin wooden sticks. It took him two weeks of painstaking work.

“This is Shady,” Roula writes. “Wherever he is, he manages to channel his energy and sorrow into something creative.”

Shady’s last video, posted on The Rich Content just three weeks before his arrest, depicts a haunting dreamscape. It starts with him closing his eyes; painted on his eyelids in black are another pair of eyes that stare out unblinking and visionless. He goes through his day in a kind of surreal sleepwalk: applying lipstick to his cheek, eating a cigarette, fishing with a rod in a garbage-strewn lot by the side of the road. He visits a friend’s house where everyone is like him — unseeing through painted eyes. One is holding a guitar as a violin, playing it with a bow. Another is rolling rice into grape leaves, packing it like a joint and passing it to Shady who lights up and smokes. They pour olive oil over ice and drink. No one speaks. It ends with Shady going back home to bed and lying down to sleep.

AD
You Might Have Missed
Where do old lesbians go to die?
Carbon Colonies & A Green New Deal
Mugamma revisited: Reimagining the building and the square
What we talk about when we talk about trees
AD
Sharif Abdel Kouddous
12 articles on Mada