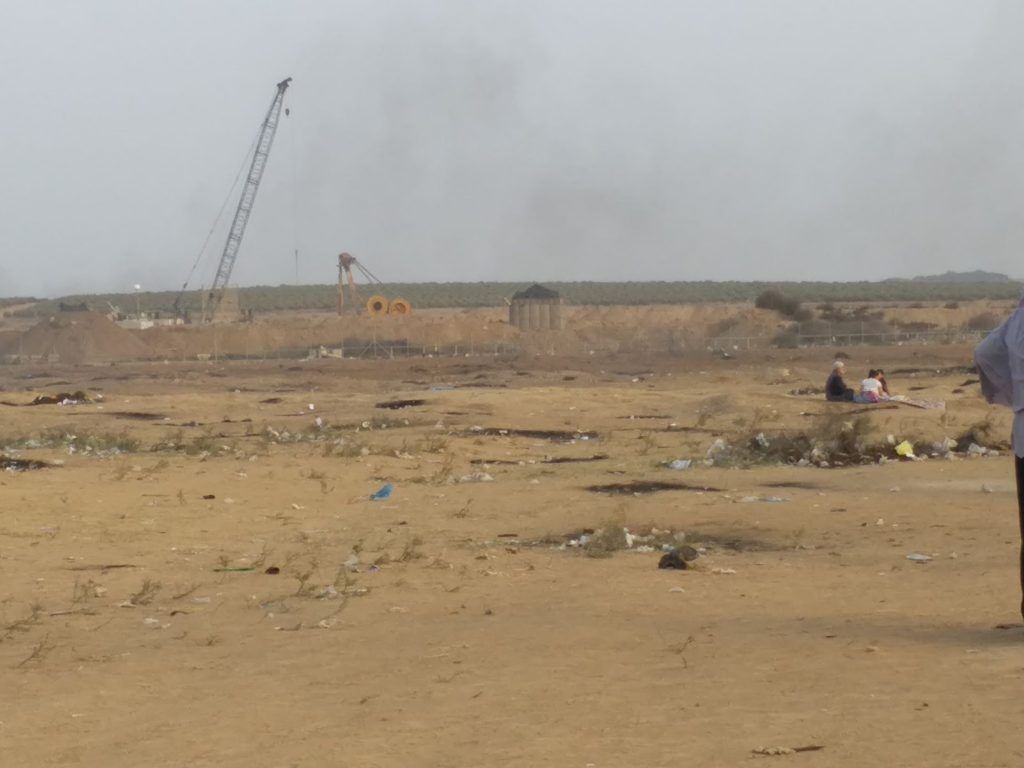 An Egyptian delegation visited the Gaza Strip on Tuesday for the most recent in a string of meetings that have produced a tenuous agreement to deescalate weekly marches on the border in exchange for greater humanitarian aid to the besieged coastal enclave.

While there have been small flare ups since the October 19 agreement, notably the killing of three children in an Israeli airstrike on Sunday evening,  and that of Mohammed Abu Obada, 27, killed by Israeli fire, plus dozens of injuries in the weekly Monday protest north of Gaza, Hamas and Israel have largely adhered to the deal. However, Hamas is growing impatient in the face of mounting pressure from Gazans protesting against continued Israeli occupation and the recent deaths, sources close to Hamas told Mada Masr.

According to the sources, the Palestinian faction communicated to the Egyptian delegation that there is need to expedite the flow of Qatari money into Gaza in order for Hamas to have some tangible results for the deal it struck.

“Hamas told Egypt that people don’t feel the effect of the momentary peace, as none of the large projects Israel promised in the agreement are starting any time soon in Gaza,” one of the sources said, adding that Hamas leaders criticized the need for Palestinian Authority approval for the provision of aid. “Hamas can’t just wait for the PA’s approval on every project. Time isn’t on anyone’s side now, and waiting for the PA’s approvals wastes more time,” the source said.

Permitting Qatari money into Gaza is part of a deal that was struck on the brink of war in mid-October with last minute Egyptian intervention. “[Egypt assured Hamas that] if Hamas gives this week a chance for peace, Israel will allow beneficial projects from the United Nations to enter Gaza, in addition to revoking the decisions to close the Karm Abu Salem and Erez border crossings and reallowing entrance of the fuel powering Gaza’s sole power plant after an eight-day halt,” a source close to Hamas said at the time, adding that Qatar has already shown a readiness to provide the financial aid through UN projects.

Israel, however, remains afraid that the Qatari money intended to pay administrative employee salaries will be directed toward Hamas’ military operation, a fear that the Egyptian delegation communicated in Tuesday’s meeting, according to the source. There are approximately 450-600 Hamas administrative employees also working for the Qassam Brigades, its military wing,  all of whom Israel has refused to pay, according to the source.

Egypt’s proposed solution presented the United Nations as a key oversight body. “The delegation informed Hamas that as long as Qatari fuel enters Gaza smoothly under the UN’s supervision, so can the salaries of Hamas employees,” the source said.

The source close to Hamas said that Egypt urged Hamas to pay for the salaries of its military wing itself, promising that the Qatari money would enter Gaza soon.

At the beginning of October, GIS officials met with Hamas officials in Cairo to hammer out a simplified version of the ceasefire with Israel that, in August, seemed to be a done deal but sputtered out along with the rest of the negotiations. While the earlier version sought to end violence between Gaza and Israel by reopening border crossings, expanding the Mediterranean fishing zone and rebuilding Gaza’s infrastructure, the new deal centered on the entrance of humanitarian aid into the strip funded chiefly by Qatar and under UN supervision, in addition to a potential prisoner swap.