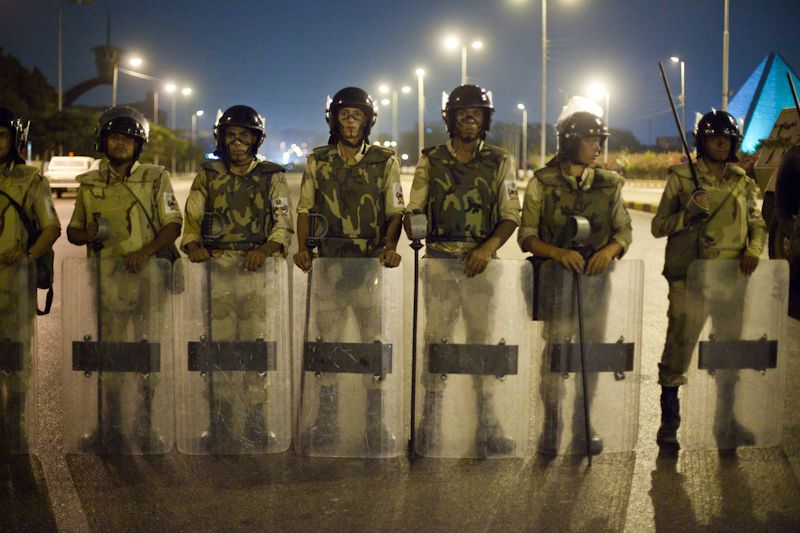 Amnesty International called on France to suspend arms exports to Egypt in a Tuesday report, stating that French military equipment is being used for violent internal repression in contravention of international human rights law.

The report, which specifically referenced the violent dispersal of the Rabea al-Adaweya and Nahda sit-ins in August 2013, highlights that “Between 2012 and 2016 France supplied more arms to Egypt than it had in the previous 20 years; and in 2017 alone it delivered more than 1.4 billion euros worth of military and security equipment to Egypt.”

The French government denied claims of violating international law, telling Amnesty ahead of the report’s publication that the only arms exports to Egypt were licensed for use by the military in its ongoing “war against terrorism.” However, an anonymous French official is cited as saying that Egyptian authorities diverted some of this equipment to internal security forces.

An Amnesty analysis of open-source video footage in addition to audio-visual material and hundreds of photographs provided by local human rights groups and media outlets shows French-supplied military equipment being used by Interior Ministry forces in Cairo to crush dissidents between 2012 and 2015.

According to the report, French-supplied Sherpa and MIDS armored vehicles were used in August 2013 to disperse protesters. Amnesty’s North Africa Campaigns Director Najia Bounaim is cited as saying that this is a violation of international law and European Union regulations, which say that a member state may “deny an export licence if there is a clear risk that the military technology or equipment being exported might be used for internal repression.”

“In the case of transfers made to Egypt, this risk was crystal clear,” Bounaim is reported as saying.

On August 14, 2013, police troops supported by military forces were deployed to forcefully disperse tens of thousands of protesters expressing support for the Muslim Brotherhood-affiliated former President Mohamed Morsi at the Rabea al-Adaweya and Nahda squares. The violent dispersal left 607 protesters and eight police officers dead, according to figures published by the June 30 fact-finding committee founded by interim President Adly Mansour, although other organizations have presented significantly higher figures.

In the report, Amnesty criticized the French government for continuing to ship arms to Egypt, which it says fails to show to accountability for its rights violations or signal an end to this “pattern of abuses.” The London-based rights organization said that on multiple occasions it has raised the issue with France, which now risks complicity in Egypt’s repression.

“France, along with other supplier states, should suspend the transfer of all arms at risk of being used in human rights violations until the Egyptian authorities credibly show that they have investigated past misuse,” the report states.

Since 2013, Bulgaria, Cyprus, Czech Republic, France, Germany, Hungary, Italy, Poland, Romania, Slovakia, Spain and the UK are all reported as having supplied arms, including small arms, batons, tear gas and armored vehicles, to Egypt through exports or brokering, according to Amnesty. The organization added that all of these could be used for internal repression.

The report also mentioned that the Egyptian military held at least two unarmed men in United States’ Humvee armored vehicles before they were shot dead last year and the use of US-manufactured F-16s to deploy cluster bombs in North Sinai earlier this year, which Amnesty first reported on in March this year. While the Egyptian Foreign Ministry frequently comments on reports issued by rights organizations, there was no official response to these accusations.

The Foreign Ministry has struck out at Amnesty International in particular on previous occasions, criticizing their reports on the human rights situation in Egypt and claiming, “The organization is not impartial, and is motivated by political stances.”

In 2016, several other rights organizations issued a report criticizing France for its provision of armaments despite Egypt’s continued human rights violations, a topic that has, despite regaining some priority in recent months, taken a back seat in Egypt-EU diplomatic discussions.

Topics
Related
torture
HRW report: Egyptian-American forcibly disappeared, tortured for 4 months before being brought before military prosecution
Khaled Hassan alleges being disappeared and tortured for months at the hands of Egyptian security
arms deals
Rights take back seat to ‘priorities’ in Egyptian-European relations
Leonardo Giansanti | Despite Egypt's ongoing rights abuses, arms sales, migration deals and Libya negotiations continue
Sisi foreign visits
France and Egypt: Allies of convenience
Jenna Le Bras | Does this relationship have any benefits besides contributing to the legitimation of a repressive power?
arms deals
Pursuing alternatives to American weapons
Pesha Magid | Egypt purchased two French warships at the end of September and rumors of new arms deals have since been