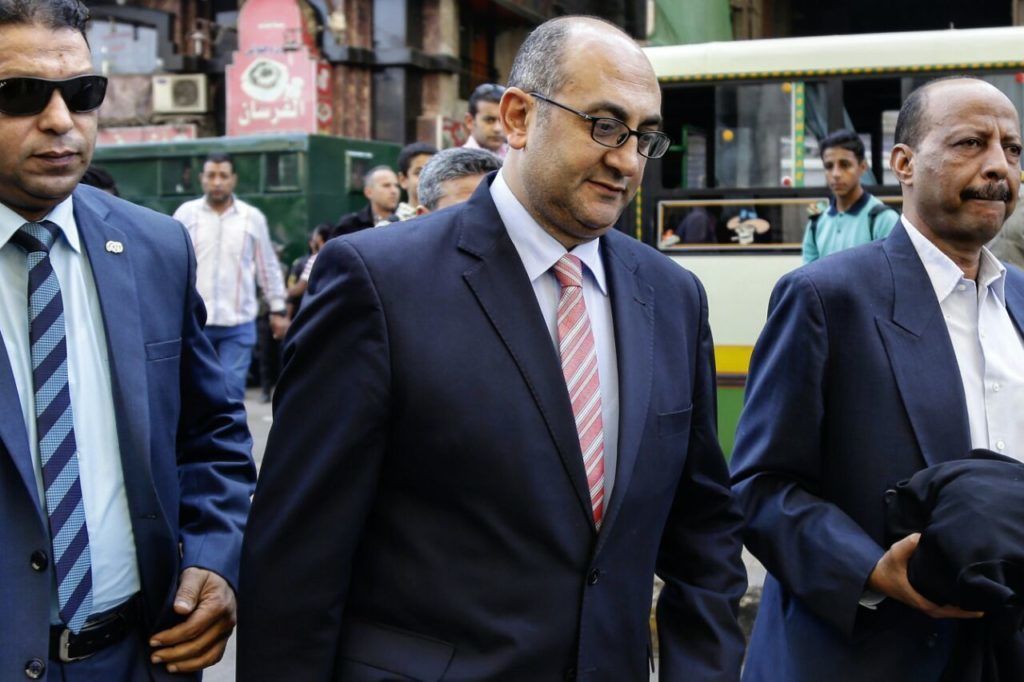 Despite Saturday reports that lawyer Khaled Ali was banned from travel in relation to the ongoing NGO foreign funding case, investigating judge Hesham Abdel Meguid was unable to verify whether his office had issued the decision.

The media outlets that reported Ali was facing a travel ban added that he had not been summoned for questioning, without providing the source of their information. Abdel Meguid, who is presiding over Case 173/2011, was unable to comment on Ali’s status, but told Mada Masr that he did decide to summon activist Esraa Abdel Fattah for interrogation in the case. She is expected to be questioned on Tuesday.

Ali, a lawyer and former presidential candidate, has been involved in the case as a lawyer, and, as such, said that he has been present in many of the interrogation sessions. He said that while Abdel Meguid told him on several occasions that his name is listed in the case, he has not been summoned for interrogations in the case, nor has he been informed that a travel ban has been issued against him.

The NGO foreign funding case dates back to December 2011, when Egyptian authorities stormed the headquarters of a number of foreign civil society organizations and opened investigations into their activities. The investigation was split into two parts: a case dealing with foreign organizations operating in Egypt, which is currently in retrial, and a second case addressing local organizations, which is still under review.

A number of rights activists have been interrogated in relation to the case, had their assets frozen and been banned from leaving Egypt pending investigations into charges of receiving foreign funding with the aim of destabilizing national security.

Ali criticized the decision of media outlets to report that he was handed a travel ban in the case without first verifying the news with the investigating judge, saying that he has not been banned from travel in any other cases and that he has left the country several times in past months. He said that he returned from a trip to Tunisia on Wednesday and was able to reenter the country without any issues, adding that authorities did not inform him of any obstacles that may prevent him from future travel.

However, a journalist who is close to the case told Mada Masr, speaking on condition of anonymity, that in late September, authorities at the Cairo International Airport attempted to prevent Ali from traveling to Tunisia. While the lawyer was able to pass when he provided an administrative court ruling stating that his name is not on the travel ban list, the journalist said that the airport filed an inquiry regarding Ali’s travel ban status.

Ali denied these claims, stressing that his recent trip to Tunisia was “normal.”

Topics
Related
Khaled Ali
Lawyer Khaled Ali’s 3-month ‘public indecency’ sentence upheld
The 3-month sentence handed to lawyer and Khaled Ali for committing an indecent act was upheld
NGO foreign funding case
Interrogation of Al-Nadeem co-founder Magda Adly postponed
Set to take place on June 3, Magda Adly's interrogation has been postponed to a later date
Al-Nadeem Center for Rehabilitation of Victims of Violence
Anti-torture NGO founders Magda Adly and Suzanne Fayyad summoned for interrogation
The summons requested that the two activists appear before the judge on Thursday, May 31.
Khaled Ali
Amid allegations of sexual misconduct, Khaled Ali resigns from party and ECESR
After allegations of sexual misconduct, Ali resigns from the Bread and Freedom Party and the ECESR